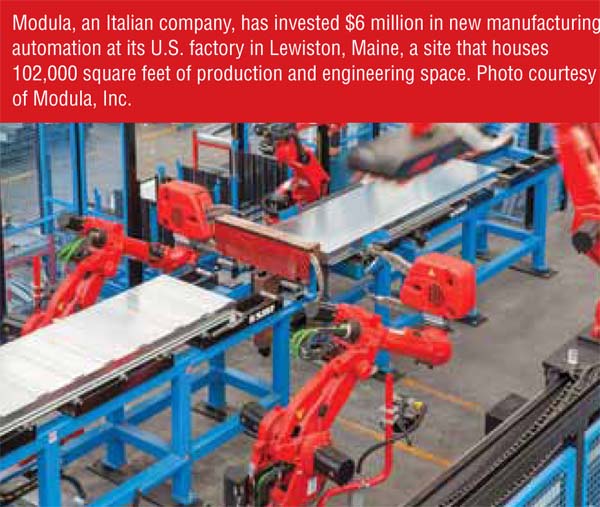 A company that typifies the “serve customers globally, manufacture locally” credo of foreign direct investment is Modula, Inc., an Italy-based manufacturer of automated storage and picking (retrieval) systems that are customized for factories and warehouses worldwide. Modula, a division of System Group, opened an upgraded, 102,000-square-foot factory at its U.S. headquarters in Lewiston, Maine last September, aiming to serve the burgeoning North American market for automation in supply chain logistics. The company manufactures its full line of equipment at the facility, using parts that represent more than 70 percent U.S.-made content.

Modula CEO Miguel Fabra said in an email interview that the company decided to manufacture in the United States in 2009, when it recognized a growing trend: More and more, the prospective buyers of Modula’s products in Europe and North America were choosing to source locally. Seeing the U.S. as a prime market for automation and aware of North American companies’ needs for faster time-to-market, Modula sought to manufacture its automated storage units in closer proximity to those companies. That year, Modula acquired Diamond Phoenix, a material-handling technology supplier and systems integrator based in Lewiston, Maine.

“Modula believes that anticipating customers’ needs has a direct impact on the bottom line,” Fabra said. “North America is a fertile ground for automation, and, as such, is the place to be. We simply followed that trail.”

Last year, Modula invested $6 million in new manufacturing automation for its Lewiston factory, bringing its total investment in the headquarters—including upgrades to the facilities—to just under $10 million. The U.S. factory is bringing into operation all of the automated sheet metal fabrication technologies used at Modula’s plant in Italy. Fabra said that these technologies include a 3D laser tube profile cutter, 2D laser sheet cutter, automatic puncher, automatic panel bender, CNC press brake, and automatic powder coating line. Today, Modula employs about 60 people at the Lewiston plant and 190 at its facility in Italy.

Modula’s automated storage and retrieval systems include vertical lift modules (VLMs) that allow companies to store stock-keeping units (SKUs) vertically, enabling them to save valuable floor space. Besides optimizing space, the automated systems are said to improve picking accuracy, increase productivity, and enhance security and ergonomics. The vertical lift module is reported to maximize storage potential by making full use of vertical space between the floor and ceiling. Parts are stored in units up to 46 feet high and, when needed, are automatically delivered to the operator to avoid unnecessary walking, bending, and reaching for parts.

According to Fabra, the acquisition of Diamond Phoenix in 2009 targeted “the evolving needs of U.S. buyers who favored the lead time and support offered by providers with home-grown manufacturing capabilities.” As an Italian company, Modula viewed the acquisition as its first offshoring effort.

“For us, it would be offshoring, but actually, we are following a reshoring trend that sees U.S. manufacturers coming back to cut delivery times to their customers as costs of doing business in Asia have increased,” Fabra said. “Working out of Maine, we benefit from talented technicians and good infrastructure to serve customers throughout the U.S. and Canada.”

Just as Modula’s North American customers favor the shorter lead times and higher levels of customer support that the company is able to provide by manufacturing in the U.S., Modula also benefits from similar advantages offered by its own U.S. suppliers of parts and components. Fabra mentioned “quality, availability, and delivery time” as key considerations in Modula’s decision to source parts in the U.S., adding that the company prefers using local vendors and suppliers because it “believes in Made in USA products.”

“To be lean and reactive to the market, you need close partners, and the best way to achieve it is to create partnerships with local [suppliers],” said Fabra. “We firmly believe that American shops can compete with any other country in quality and innovation.”

Fabra also hailed “lead time, support, and flexibility” as prime advantages of sourcing components made by U.S. parts suppliers. Although more than 70 percent of Modula’s components are manufactured locally, the company is aiming to push that figure to 85 percent U.S.-made content by the end of this year and to more than 90 percent by the end of 2018, he said.

“We are still buying some parts and components from Italy while we are searching and selecting local suppliers, and following the manufacturing learning curve,” Fabra said. “Most probably, we will soon import only some electronics components, made in our Italian facility.”