Gold Plater Delivers for the Stars 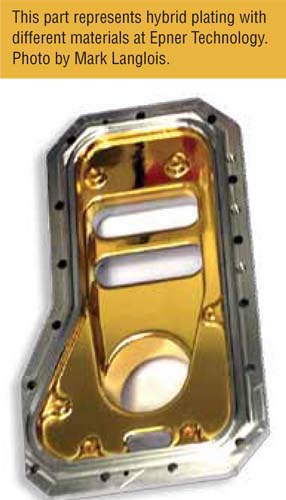 Epner Technology started in 1910 as Cohan-Epner Co., a costume jewelry plater, but it evolved over the next century into a high technology plater that works for NASA, major aerospace firms, and the U.S. military, as well as for artists, machine shops, contract manufacturers, and jewelers. The company plated this year’s Oscars, and it plated parts for the 2018 (yet to launch) James Webb Space Telescope. It has also plated World War II radar components, as well as art, sculpture, Xerox machine parts, TOW missile components, eyeglasses, pinkie rings, and more.

Two-meter aluminum rings, now orbiting earth in four satellites designed to measure the impact of solar radiation on the earth’s magnet fields, were also plated by Epner. The rings were machined in Maryland by The Bechdon Company, Inc.

“Plating is a big element of what we do at Bechdon. Epner is our plating company. We never go anywhere else,” said Bob Castor, engineering planner with Bechdon, a precision machining company in Upper Marlboro, Maryland. Bechdon offers 5-axis capability on machines with travels to 196 inches and 18,000 RPM, as well as wire and ram (sinker) electrical discharge machining (EDM) using the latest improvements in CNC technology, according to the firm’s website.

Epner Technology and Bechdon Co. collaborated on parts in the Magnetospheric MultiScale (MMS) Mission, designed to study the intersection of the earth’s magnetic fields and solar radiation. The satellites are being managed by NASA’s Goddard Space Flight Center, and contributors to the project include the Southwest Research Institute, Lockheed Martin, UCLA, UC Berkeley, and others.

Bechdon machined four two-meter diameter aluminum rings that Epner then plated with Laser Gold, a durable material that is 97 percent reflective in the infrared. The rings on the MMS mission were specified to be coated with Laser Gold. Elsewhere in the satellites are electrostatic analyzers, which are used to filter out electron particles and which called for Laser Black, another Epner product.

Epner Technology’s Laser Gold specs are, “Reflectivity shall be 97 percent at a wavelength of 700 nanometers when measured on a Perkin Elmer 750 Infrared Spectrophotometer that has been calibrated to a National Bureau Standards, now NIST #2011. In addition, the hardness shall be 180 Knoop when measured by the diamond indent method.”

Epner Technology’s Laser Gold coats more than 20 titanium parts for the Near Infrared Camera (NIRCam) on the James Webb Space Telescope, which will leave earth for orbit in 2018. It is larger than the Hubble Space Telescope, and it was designed to out-perform Hubble. The parts include the filter wheel housing, a titanium part plated with Laser Gold. The other parts were a variety of components that included partial plating, total plating, or a hybrid part that combined Laser Gold with Tiodize® titanium.

“In some cases, we had to protect the Tiodize portion with masking, which was hand-painted on. We then stripped off the remaining Tiodize portions, plated it with Laser Gold, removed the mask, and gave them back a part with two finishes on it,” explained David Epner, 84, the son of the company founder, Louis Epner. 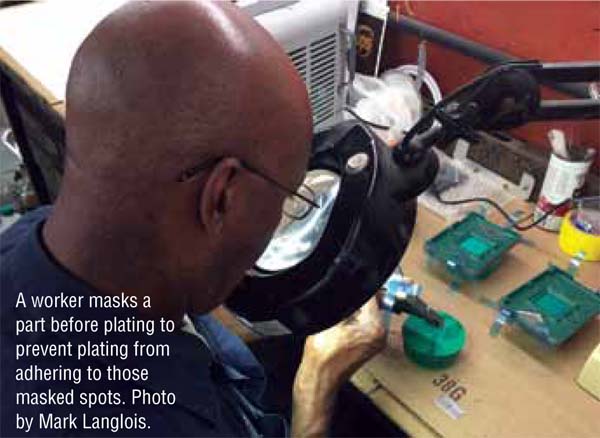 “Your Epner gold coating, the polishing of the tapered optical light pipe and the Lambertian surface preparation for our prototype optical integrating cavity, has produced a text fixture that has exceeded our performance requirements” wrote Steve Somerstein, a Lockheed Martin staff scientist on the NIRCam Program, in a letter to Epner Technology.

Laser Gold’s high reflectivity and resistance to oxidation, for example, make it the coating material carried on the Mars Orbiter Laser Altimeter (MOLA), a device used to map the surface of Mars.

In addition to aerospace and defense, Epner’s markets include medical, astronomy, gas sensors, microwave, electronics, automotive, and 3D printing. The company also serves contract machinists and fabricators, artists and sculptors, and other platers. Microwave filters and resonators, base metal substrates, thermal controls, and cold shields are among the many applications. 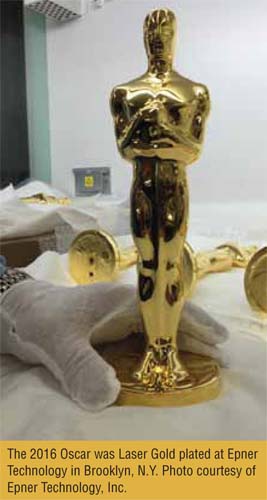 David Epner said customers want many different outcomes. The company plates to customer specifications across a wide range of dimensions and properties, from plating thickness and aspects of the finish, to reflectivity, hardness, electrical conductivity, adhesion, and others.

The 2016 Oscars were coated with Laser Gold, plated by Epner Technology.

When David Epner was first approached by an Oscar director about plating the Oscar, he   asked the director, ‘What’s the gold spec?’ Epner recalled in an interview with D2P. ‘Is this supposed to be 24 karat?’  “Of course,” came the reply.

Epner dropped an ingot of gold into the man’s hand and said, “This is 24 karat gold.”

One of this year’s Oscar winners asked how to clean it. “Soap and water, nail polish remover, or nitric acid. Laser Gold is rugged—your choice,” David Epner said.

Epner Technology developed Laser Gold in the 1970s to meet Xerox specifications for aluminum parts at the hottest spot inside its printers, where toner fused to the paper. Existing parts blistered in the heat. “That’s why Xerox copies came out hot,” David Epner recalled. The aluminum part was subjected to 500-degree heat and constant abrasion from the paper gliding over it. It had to be reflective, as well as durable. Typical 24 karat gold is reflective, but soft, not durable. Developing durability in 24 karat gold is an Epner Technology secret.

“We can’t discuss the price. We can’t reveal how thick it is,” Epner said.

David Epner said that in Epner’s 106-year history, someone always seems to turn up when the company needs them. For company founders Louis Epner and his partner, Emanuel Cohan, that someone was Mac Weiss, a 14-year-old delivery boy who stayed with the company for 60 years. He didn’t just deliver costume jewelry.

“What you have to understand is the two owners of the company [had] 6th grade educations,” Epner said. “Mac took a course in electro chemistry. He became the chemist of the company and the eventual plant manager, and was with the company for 60 years.”

Louis Epner and Emanuel Cohan learned the trade while working at Joseph Landsman Jewelry Repair, and went on to found their own business. Their seed money was $600 in gold saved by Cohan’s mother, who was also Epner’s mother-in-law. She was a Hungarian immigrant who ran a wedding and bat mitzvah catering business.

Young Mac Weiss led the plating firm into defense work. “It was he that in the late 1930s perfected silver plating on the earliest radars,” Epner said. These early radars saw action in Great Britain during the Battle of Britain. “We were a key supplier during the war. Many of the employees were not drafted and, by that time, the company had my older brother Gerald, who graduated as a chemical engineer. He joined the company in 1935. During the war, he was a special consultant in plating for the Air Materiel Command. He was stationed in Cleveland and toured the big armament factories of the day, Willow Run and Chicago Pneumatic. He’d come back and tell me stories.”

David Epner, 20 years younger than his brother Gerald, remembers his older brother visiting the family in Brooklyn and talking to him about the airplanes he saw. “I was no more than 10 or 12. How do I remember that stuff? He told me about the P-75. It had contra-rotating propellers. It flew. It was ready, but it never went into production.”

For David and Gerald Epner, the one person they hired who helped the business was Steve Candiloro. “Steve was our genius,” David Epner said. Steve’s son, J.R., is now the plant manager and has built on his father’s plating genius.

At its peak employment, Epner manufactured its most numerous product—about 15 million copies of a tiny narrow-diameter copper tube, lined with Laser Gold, that was part of an infrared ear thermometer. The part is no longer required. Another major product was a tiny cup-shaped reflector, a key guidance component of the TOW missile. Epner sold about 750,000 of them.

The company has about 50 employees today, and Epner said that is the right head count. He doesn’t intend to grow it again.

David Epner was once given a trade show award, the Midas Award, for his sense of humor and for brightening the day of the people who work the show. He had attended the SPIE optics and photonics trade show for roughly 35 years, and was invited to its exhibitors’ breakfast in 2014. 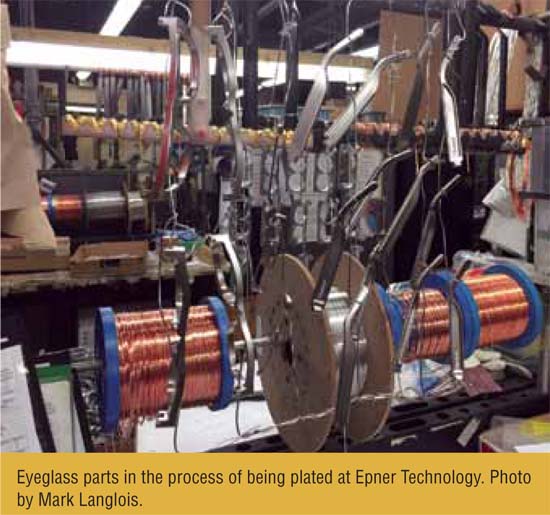 Unfortunately, that morning at the hotel, it was raining and he couldn’t find a cab. He was running late. He wasn’t looking forward to a trade show breakfast plus a few “state of the industry” speakers. His friend suggested Uber.

“I expected to pay a few dollars more than our usual eight-dollar cab ride. It was $30 more.”

As he arrived at the venue, he received a somewhat frantic call from his New York office asking where he was, alerting him the SPIE people were looking for him. He said he was just arriving and wondered at the fuss. Once seated, he figured it out. The SPIE staff gave him the Midas Award, something they invented to honor him for raising their spirits at the conference for the last 35 years. Officially, the award read, “For many, many years of exemplary and distinguished gold-coated exorbitance and bemazement.”

What did he tell the crowd?  “If I had any idea I would be up here this morning; I wouldn’t have worn blue jeans.”

One day, a stranger shows up at Cohan-Epner, asking Epner to gold plate 100,000 feet of fine stainless steel cable in time for an art show opening in three weeks.

“I thought he was nuts,” said Epner. “I replied, ‘That’s not going to happen,’ to which American Sculptor Richard Lippold replied, ‘Tell me what it takes,’ a business owner’s dream reply.”

Epner had jumped through the hoops, met the deadline, and was rewarded with a bottle of wine in a paper bag that Lippold handed Epner. Epner tries to wave him off. “I said, ‘Richard, please.’” It was the Mouton-Rothschild ’59 with a label designed by Lippold for Rothschild. It was signed by the artist to Epner, “With deep appreciation, Richard Lippold.”

The internationally renowned banking and wine-making family, Rothschild, started the artist wine label tradition in 1946. The vintner rewarded artists who designed that year’s labels with cases of wine. Andy Warhol designed the 1975 label, Joan Miro designed the 1969 label, and Jeff Koons designed the 2010 label, among many others. “It was the best claret in 50 years,” Epner said. He and his wife drank it on her 80th birthday. He kept the bottle.

One of the most recent ‘off the street’ jobs Epner Technology undertook was a rabbit sculpture originally designed by Jeffrey Koons. “We had a bigger problem with that than meets the eye,” Epner said. “It was hollow and it was filling up with plating solution that was oozing out.”

Epner Technology figured out how to stop the solution from being absorbed by the rabbit, and the final product didn’t leak. “We had to go through numerous steps of sealing the porosity and cavities. We solved the problem,” David Epner said.

What Does ‘American Made’ Mean to You?