New High Strength Steels Could Be Boon for Auto Industry 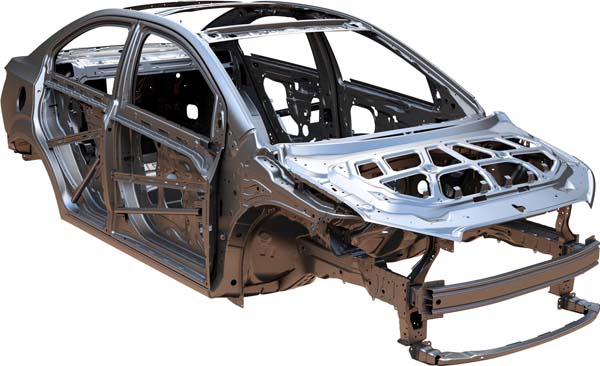 As automakers seek to reduce the weight of their vehicles, NanoSteel believes that significant opportunities exist for the use of its advanced high strength steel in structural applications. Photo courtesy of NanoSteel.

A designer of nanostructured steel materials is drawing interest from automakers who are looking to reduce the weight of their vehicles while overcoming the historical tradeoff between strength and formability of steel.

NanoSteel, a designer of nanostructured steel materials, is aiming to help auto manufacturers reduce the structural weight of cars with advanced high-strength steels (AHSS) that can be stamped and formed at room temperature without additional manufacturing infrastructure or investment. The company, currently working to develop steel materials that offer unique combinations of high strength and formability , is poised to benefit from the national trend reported this year that nearly two-thirds of automakers are focused on light-weighting their vehicles in an effort to meet federal Corporate Average Fuel Economy  (CAFE) standards by 2025.

The CAFE standards set a requirement of 54.5 mpg fleet-average for car makers by 2025. No automaker yet meets that requirement. A national survey reported in August 2016 revealed a mix of strategies to achieve that standard. While that 63 percent of auto manufacturers will attempt to meet the CAFE requirement by manufacturing lighter cars, nearly half (49 percent) are attempting to meet the goal through engine efficiency programs, and 40 percent through transmission technologies. Electrification of the vehicle was also increasingly mentioned by respondents, with 37 percent saying that they employ mild hybrid or start-stop technology, and 32 percent, full hybrid or plug-in technology.

NanoSteel has been developing stronger steel alloys that will let auto manufacturers design cars using thinner and lighter pieces of steel. The trend toward increasing the variety of materials used in cars goes beyond steel, of course, and includes other lightweight materials, including aluminum and composite materials, such as carbon fiber. Craig Parsons, president of automotive at NanoSteel, said the industry used about 10 types of steel 30 years ago, and that list has grown to nearly 200 today. NanoSteel is increasing that list.

Parsons explained that NanoSteel offers designers a combination of attributes that they didn’t have before. The steel is both high strength and “formable,” meaning designers can shape it into desired forms. It can be shaped at room temperature using existing manufacturing equipment. By way of contrast, traditional steel becomes less formable as it increases in strength.

Advanced high-strength steel will play a key part in improving fuel efficiency, reports the Steel Market Development Institute, in its study, “2016 Steel Industry Technology Roadmap for Automotive.” The report said that the kind of advanced steel that NanoSteel designs offers the strength and shape-ability that automobile manufacturers need to lower the weight of cars.

“The steel industry continues to develop new steel grades as the automotive industry concentrates on mass reduction,” the report said, with the greatest challenges being the development of higher strength, more ductile sheet steel, plus the necessary facilities to manufacture these grades. NanoSteel is a company working on meeting those challenges. 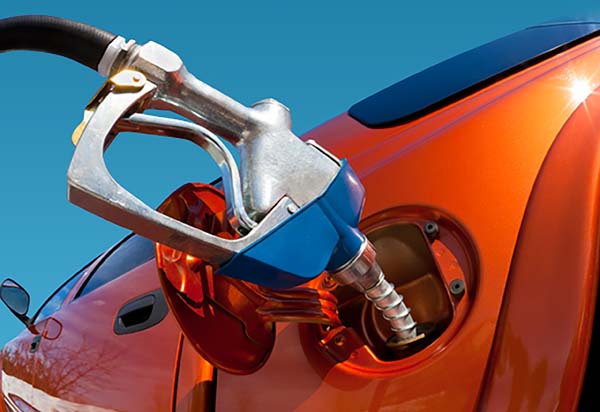 NanoSteel and other manufacturing companies are poised to benefit from the new mileage standards set by the federal government. DuPont Automotive sponsored the 2016 Wards Auto Survey in August, its sixth annual survey on the CAFE standards. This year’s survey revealed that 63 percent of auto companies are using light-weighting as their primary strategy to meet the 54.5 mpg standard.

In another survey finding, respondents were “only moderately confident” that existing materials will help the industry meet the mpg standard. The existing material of choice for light-weighting is aluminum, said 25 percent of respondents, followed by multi-material solutions at 21 percent. Among 2nd tier choices were a combination of advanced high-strength steel, advanced composites, and engineered plastics, for a combined 39 percent of respondent choices.

“Investing in the development of innovative and high performance materials is a key strategy for DuPont,” said Brian Fish, North American automotive marketing manager, DuPont Performance Materials, in the press release announcing the survey results. “Light-weighting can be applied to virtually every component and part, and we continue to work with the industry to look for opportunities to reduce weight across systems.”

NanoSteel, working with AK Steel Corp., provided a number of OEMs with advanced high-strength steel for testing earlier this year. NanoSteel reports that the sheet steel is strong and formable. Because it is stronger, NanoSteel reasons, the automaker can design thinner parts that are lighter without using expensive manufacturing techniques. The automakers also won’t sacrifice strength, rigidity, or safety.

“I think one of the most impressive things for me is that with the advent of new advanced high-strength steels, like NanoSteel’s sheet, cars can be lighter and safer,” Parsons said.

GM Ventures is an investor in NanoSteel, as are EnerTech and Fairhaven Capital. NanoSteel and AK Steel won the Platts Global Metals Breakthrough Solution of the Year Award in 2016 for the advanced automotive sheet steel that combines high strength with formability. 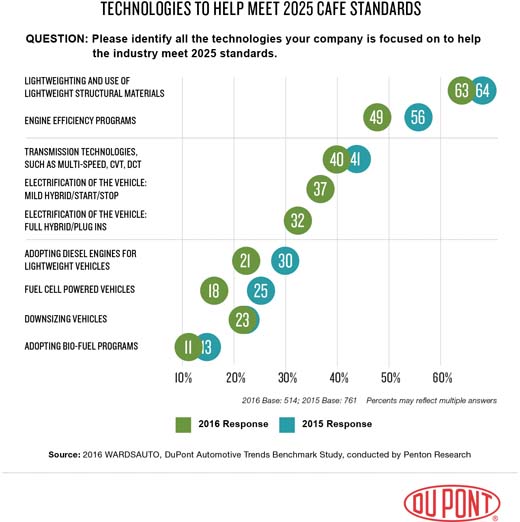 Parsons explained that the GM Ventures connection helped NanoSteel take an alloy with the strength and ductility characteristics that GM wanted, from a small research sample into the production quantity delivered in April. NanoSteel developed the alloy and then had the sheet steel produced at AK Steel Corp.

“The focus of our company and core value proposition is design — we design alloys — and so much of the emphasis of the business is in the R&D group in Idaho Falls,” said Bossert, the executive vice president.

“NanoSteel was founded in 2002 by scientists from the Idaho National Laboratory, including Daniel Branagan, Ph.D., the company’s chief technical officer. The Massachusetts Institute of Technology (MIT) recognized Branagan at age 33 in 2002 as one of the top 100 “brilliant young innovators” who would change the world.

Parsons explained that since its founding in 2002, company scientists worked on several generations of nanostructured steel materials, and with the investment by GM Ventures announced in 2012, NanoSteel leveraged previous alloy designs to develop sheet metal products that are now being manufactured.

“So typically, as you increase the strength of a material, it’s not as formable. With our material, we have the formability characteristics of some of the most mild steels out there, but we have the strength characteristics of some of the strongest steels, and that’s the key differentiator between NanoSteel and what’s being produced today,” Parsons said. “Having somebody like General Motors, who was invested in the company and believes in the company, and has demonstrated the desire for the product, gives us some credibility to go into the mills and say, ‘Hey, guys, we’d like to look at making these things in a full scale production mode.’” 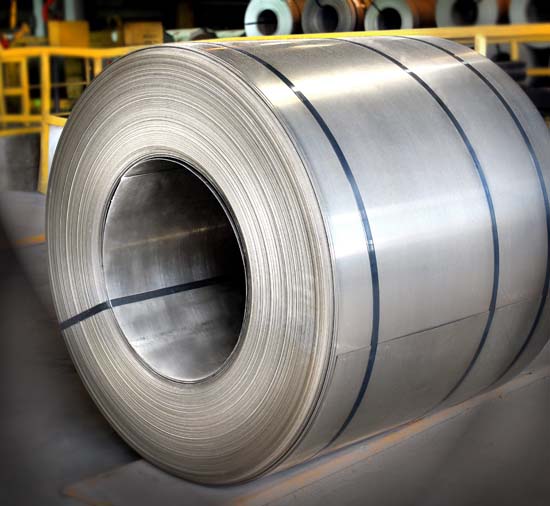 The steel that NanoSteel delivered to OEMs “overcomes the historical tradeoff between strength and formability by delivering exceptional levels of both properties at the same time (approximately 1200 MPa tensile strength and 50 percent elongation),” the company reported in the delivery announcement. Tensile strength is a measurement of the amount of force required to pull something until it breaks apart. Elongation is a ratio created after a part is stretched until it breaks. The ratio is created after a piece breaks, comparing its original length and its length after it broke.

NanoSteel maintains an R&D facility in Idaho Falls, an automotive group in Troy, Michigan, and a company headquarters in Providence, Rhode Island. Company officials emphasize that NanoSteel is not a  steel manufacturer, but rather a designer of nanostructured steel alloys. Parsons said the Troy facility works exclusively with automakers and with Tier One firms to validate NanoSteel products for use in vehicles.

“So we’re talking about design potential and what it’s going to take to get this material in vehicles,” Parson said. “Whereas, our Idaho lab’s specific role is to develop the material and work with the steel mills to productionize it.”

Bossert elaborated by saying, “We’re not actually producers of steel. We design the steels and we work with partners to produce the steels, and with OEMs, of course, to ultimately adopt the steels.”

“We designed this product so it can be manufactured in traditional steel mills,” Parsons said. NanoSteel’s business model, Parsons explained, is similar to that of Dolby Laboratories or Dolby Noise Reduction. Dolby gets paid when a company—Sony, for example—sells a radio with Dolby noise reduction technology in it.

“NanoSteel will be very similar, where we’re going to actually develop the steel technology and work with steel companies to produce it,” Parsons said. “We’ll work with them to make sure they manufacture to our specifications and that it is truly our grade of steel. Then we’ll give a license.”

Parsons and Bossert said the license agreement will be made between NanoSteel and the automobile manufacturer if the automaker uses NanoSteel in its car. The more of NanoSteel’s material in the car, the greater the fees paid to NanoSteel.

“We’re working with multiple steelmakers around the world in every region. So I can say, today, we have non-disclosures, or development agreements, with at least one mill in every region of the world,” Parsons said.