The black thermoplastic extrusion at the center of the photograph is leaving the die on the right and entering a water cooling tank on the left. The blue hoses blow air onto the extrusion as it leaves the die. Photo by Mark Langlois.

Valley Extrusions’ specialty is extruding components and finishing them into parts.

An extruded part is frequently called a “profile” because the part’s true shape can only be seen at an end. That’s its profile direction, like a person’s head. On an extrusion’s horizontal side, the long side, a plastic extrusion looks like a line, such as the gasket that seals a refrigerator door or the weather stop under a house door. Both are extrusions or profiles. Another example is the kick plates and bumpers on deli displays that fend off grocery store carts.

Valley Extrusions manufactures what it describes as the “most demanding extruded profiles,” including custom tubing, precision profiles, co- and tri-extrusions, and other profiles used in lighting, refrigeration, industry, telecommunications, aerospace, and the military, among others.

The company’s profiles also include lenses and bases for lighting, components for refrigeration cases, windows and doors, molding, and tag strips for retail displays and retail prices. They include covers for wiring and other components, said David Grice, vice president of sales and marketing at Valley Extrusions.

“We do the hard things that maybe other extruders shy away from. We’re not afraid to try new processes or different materials,” Grice said. In addition to the traditional plastic extrusion process, Valley Extrusions also co-extrudes and tri-extrudes different polymers to create the custom finishes and hardnesses an OEM customer demands. Tri-extrusion is a manufacturing process that combines three thermoplastic materials extruded through a single die designed so that the extruded materials merge together and form a single part. Each of the three components may have a different hardness (durometer) or surface finish that adds to the part’s functions and versatility.

“We want parts that work and we want to sell more of them. Our business model is a little bit different from other people. If we find ourselves in a quoting situation that’s too messed up, we’ll bow out. We have a lot of experience. We have people who have spent their life-career with us,” Grice explained. “We’re willing to go that step further. Sure, we’d love to just extrude 50 feet of material and be done with it, but we’d rather go that extra step and convert that into parts for people.”

The company also offers an array of additional services and capabilities that include embossing, notching, drilling, punching, ink jet printing, tape application and the application of magnetic material and Velcro. Valley can also provide what it calls “offline operations and services,” such as assembly, cutting, 5 axis CNC machining, and hot stamping, as well as kitting, routing, and special packaging, according to its website. Those finishing processes are Valley’s specialty.

Valley is a subsidiary of C&K Plastics, which operates an 85,000-square foot plant in Metuchen, New Jersey, and a new plant in Conyers, Georgia, that earned its ISO 9001: 2008 certification this spring. Valley Extrusions cooperates with C&K Plastics on parts that require extrusions and any of C&K’s specialty processes, such as vacuum forming, pressure forming, or twin sheet forming at its privately-held, non-union facilities.

At Valley Extrusions, off the main factory extruding floor at the company’s Allentown, Pennsylvania facility, workers in another room are cutting extrusions to length, affixing labels, adding 45 degree angles, and drilling holes in the secondary process area.

Grice said there may be a number of firms in the market who make extrusions, but what sets Valley Extrusions apart is it wants to make that part plus add the finishing touches. The firm doesn’t just want to extrude foot after foot of a profile. Valley Extrusion wants to extrude the profile and then cut and shape it to its finished dimensions and ship it to its customer’s customers. Here, the black thermoplastic extrusion leaves the water cooling tank after cooling sufficiently for cutting and packaging. The blue air hoses blow dry the extrusion, sending the water back into the cooling tank. The extruding die is at far right, below the hopper. Photo by Mark Langlois.

In general terms, about 40 percent of Valley Extrusions’ work comes from the refrigeration equipment industry. Another 30 percent comes from lighting, and the balance falls into what Valley calls “industry.” The lighting side of the industry is changing constantly, and Grice said as LEDs (light emitting diodes) gain ground in the marketplace over incandescent lights (light bulbs) and fluorescents (long ceiling lights), designers are making them smaller and smaller yet more powerful.

“We did 133 new lens profiles last year alone. I think it’s going to come pretty close to that this year.

“They’re figuring out ways to make smaller LEDs more powerful,” he continued. “A few years ago, they needed giant heatsinks and massive units. Now they’re very, very small. I’ve got an LED on my desk with a face we make. It’s ¾ of an inch wide and it’s not over ¾ of an inch tall, and I think this is the bigger of the ones. We’re seeing more and more of that. That’s the way the industry goes.”

Smaller, brighter lights lead to new uses. Lights no longer take up much space. Grice explained that as LEDs shrink, designers are figuring out more uses and different uses for them. For example, a bar shelf light that used to be six inches tall is now ¾ of an inch tall, so it opens options for new designs for shelving.

The extrusion process at Valley Extrusions starts with filling a hopper with plastic pellets, sometimes called nurdles. The hopper, a large funnel that sits on top of the extruder, feeds the nurdles into the extruder. The extruder is a long barrel with a screw inside that turns and heats the nurdles until they reach the appropriate temperature, flow rate, and liquid consistency.

Once heated, the nurdles turn into a liquid resin. The molten resin is then screened for impurities and pushed into a die shaped to the desired profile of the extrusion. The resin flows through the die where it takes the proper shape, and it flows out and is cooled in a long water bath. Beyond the water bath is a puller, which draws the profile at the proper pace from the extruder to the cutter. It is cut to length. From there, the profile can be further processed, if necessary, or packed for shipping.

Adding in a few finishing touches

“When someone comes to us and wants a lot of secondary work on an extrusion, we’re all in. That’s not the norm in the extrusion business. The norm is ‘How much footage can we get out per minute or per hour?’ That works to some extent, unless you have a customer that doesn’t want it like that, who wants a finished part,” Grice said.

“We make parts to be cut to length,” he continued. “It’s got slots; it’s got holes; it’s got a decal on it. We’ll make a part and put it in a box. A lot of extruders want to run lengths. We make parts. Our basic business is thermoforming and everything that goes with thermoforming. We’re used to using 5-axis CNC routers. We’ll do those holes; we’ll do those slots; we’ll do those silk screens. We’ll assemble our parts to other parts from the customer. We’ll package and ship it.”

Knowing the resins is part of Valley Extrusions’ expertise, and a valuable commodity for its customers. Here a worker at Valley Extrusions rolls up a plastic extrusion after the thermoplastic cools sufficiently for shipping. Photo by Mark Langlois.

In one case of Valley helping a customer, a Valley Extrusions sales person was talking to a customer who had problems with another extrusion company. That firm was making a three-foot, red, bar-shaped extrusion that opened doors on a train. A passenger wanting to walk between cars would press the red bar and it would trigger the switch to open the door. The part failed in cold or hot weather. The reason the company spoke to the Valley Extrusions sales person was the part was failing and the competitor had no solution.

“The failure was when it got cold. The material hardens when it’s cold. The switch itself couldn’t be activated. There were [also] failures on the extreme heat side, if I remember right. The doors would open on their own. ‘Reliably’ would be the key word there. It said the material, when it got cold, could not be reliably depressed.

“It wasn’t our part. It was somebody else’s part,” Grice continued. “We were not making this part. Our sales man, calling on them, followed up. Our guys are problem solvers. Our salesmen know enough about the process and the materials to recognize a problem. My guys, most of my sales force, have a long time in the industry. They’re versed at it. Not every one of our sales people is like that, but the core of our sales force is long-time and well-versed.”

Specifically, Valley Extrusions switched from the other company’s use of FPVC (flexible polyvinyl chloride, or PVC). It changed the material to a thermoplastic elastomer (TPE) with a lighter wall.

The switch now worked in all weather. It also ended material failure, including cracking, tearing, and blanching. In addition, the TPE was easier to clean and it resisted graffiti inks.

One important part of Valley Extrusions’ product mix is components of LED lights. Extrusions are used in LED lenses, which are the long plastic covers over fluorescent lights that let light through.

“That’s in the resins,” Grice said. “Different lumens of light can get through it. You start with clear, and that’s, for example, a shop light. Another version of using clear is shining them up into a reflector. The consumer doesn’t see the light source because the light shines up and deflects down. In normal commercial, they don’t want to see the spot of the LED.”

“People come to extrusions because they’re looking for a higher output and a lower price,” he added. “Not always. It’s not one of the highest tolerance processes, but it’s one of the cheapest processes. It costs 10 percent or 5 percent of an expensive injection molded tool and process,” Grice said. “With extrusions, we can tighten the tolerances up. That means slowing down the run. An extrusion is about time versus money. Extrusion is one of the lower cost plastic processes. The reason is the amount of product you can create in a minute or an hour. As you tighten the tolerances up, you slow the process down.”

For one customer, Valley Extrusions extrudes a 7-foot profile for use in a ceiling application, and the tolerance required is plus or minus 0.032 inch.

Valley Extrusions’ 200,000-square-foot facility in Allentown is a 24-hour operation that operates 16 extrusion lines. The firm has 60 employees, with two engineers on site, and its core managers have 130 years of collective experience. The company can also call on engineers from other plants operated by its parent company, C&K Plastics. Valley Extrusions is ISO 9001: 2008 compliant, and it adheres to the 5-S methodology for organizing a workplace to build and sustain quality manufacturing. 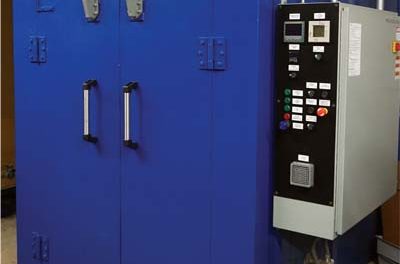 A Guide to Thermoforming Heavy-Gauge, Complex Parts – from Material Selection to Custom Tooling

Creating Added Value: How Distributors and Value-Added Resellers Have Used the R&D Credit to Strengthen Their Businesses