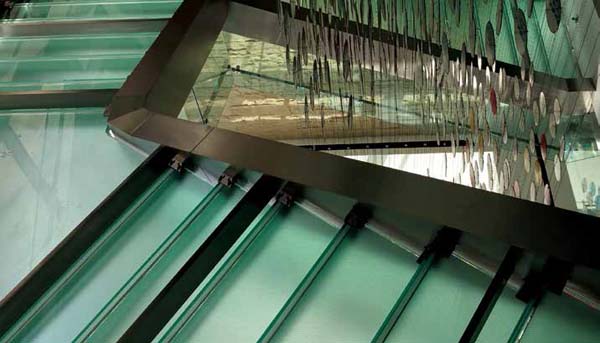 Henry’s Metal Polishing finished the surface of a two-story stainless steel and glass staircase that was installed in a commercial building on El Camino Drive in Beverly Hills. Polishers resurfaced the stainless steel to a #4 architectural brushed finish, giving the material depth, grain, and character. Once it was assembled, workers hand-sanded and finished the structure to remove any blemishes left from welding and assembly. Photo courtesy of Henry’s Metal Polishing.

Henry’s Metal Polishing Inc. (www.henrysmetalpolishing.com) is a metal finisher based in Los Angeles for the last 67 years, with a specialty that attracts business from the big three: artists, architects, and industries.

At its founding, the company finished parts for plumbing and other commercial clients, but most of that work moved to Mexico and China, said company owner Enrique Nikutowski in an interview with Design-2-Part. Henry’s Metal Polishing isn’t finishing the number of faucets, knobs, and shower heads that it started out making. Today, the company works in numerous industries by fabricating and finishing legs for tables, chairs, and couches; custom metal table bases; residential hardware; and indoor and outdoor architectural features, including door jambs, stairway components, and door headers.

The company fabricates, welds, polishes, and grinds stainless steel, aluminum copper, and other metals. Its customers include one-of-a-kind art projects, such as sculptures and signs. The company also works on pool projects and high-end lighting fixtures.

Sometimes, an artist knows exactly how they want something to look, but they don’t know how to make it. They hire a fabricator. An artist might swing by the plant 12 or more times, checking out every detail, as a piece takes shape. “It requires a lot of teaching or mentoring, or a lot of hand-holding,” said Nikutowski. “Many times, those pieces are sold to collectors for thousands of dollars, and they want to make sure it’s perfect.”

Among the pieces Henry’s polished was Ascension, an 11-gauge 304 stainless steel sculpture that was displayed in 2015 for the Beverly Hills Centennial during its year-long Arts of Palm exhibit. Ryan T. Schmidt’s Ascension appeared at the Beverly Canon Gardens. Henry’s Metal Finishing polished the 12-foot tall by 5-foot wide piece to a #8 mirror finish, a stainless steel looking glass designed to reflect both earth and sky. The entire piece, all 12 feet by 5 feet of it, must be blemish-free—no marks, no scratches, no lines.

“Believe it or not, most artists are poor,” Nikutowski said. “They don’t have a big budget. We’ve lucked out. We have two or three artists who are well established. One piece of art is being assembled here in LA, and it will be shipped to Berlin, Germany, to the customer.”

Nikutowski explained that workers at Henry’s polished the Ascension sculpture with a full range of sandpapers, starting with 60 grit and progressively moving to finer and finer grits until Schmidt was satisfied with the mirror finish revealed by 1500-grit sandpaper, followed by a sisal and color buff. While polishing and grinding the metal, Henry’s workers removed the weld marks and any heat discoloration in the metal, making the steel sculpture seem like one piece of metal.

Corporate customers are different from artists.

“They tell you one time what they want, they tell you the standard, and that’s the end of the story. What we hear is, ‘This is what I want it to look like. Can you match that sample?’” Nikutowski said. His job when working with a corporate customer is to talk to the OEM, learn exactly what they want, and then talk to his employees at Henry’s to make sure they’ll meet the customer’s expectations. Good communication is essential.

“If they have no sample, we finish three pieces of stainless steel to #6 and let them decide. We know what we did differently. We make one for them so we get the finish they want. They look at it and they have a reaction. It’s [either] too coarse, [or] it’s too fine: ‘I didn’t want the lines.’”

“We ask for a sample to make sure we are making it to their specifications. For all technical purposes, it’s a #6 finish, but it’s a range. Different materials are used to reach it. Could be the grain of the belt. Every one has a little different feeling. If they have no sample, we finish three pieces of stainless steel to #6 and let them decide. We know what we did differently. We make one for them so we get the finish they want. They look at it and they have a reaction. It’s [either] too coarse, [or] it’s too fine: ‘I didn’t want the lines.’”

Nikutowski said each customer requires a personal touch and a long conversation.

“We work together. I’m the bridge between the customer and the polishers in the back of the building. I look at it and sometimes I’ll say it’s too coarse, or I’ll say it looks good, and then I bring it to the architect and learn if we have to do it twice,” Nikutowski said. “Every job is custom. Every finish is custom. You can’t automate it. We have to make sure we come up with the right surface finish.” 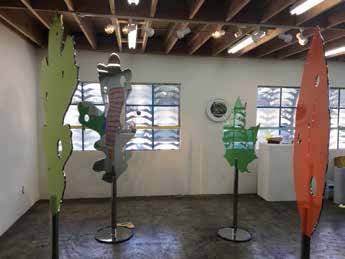 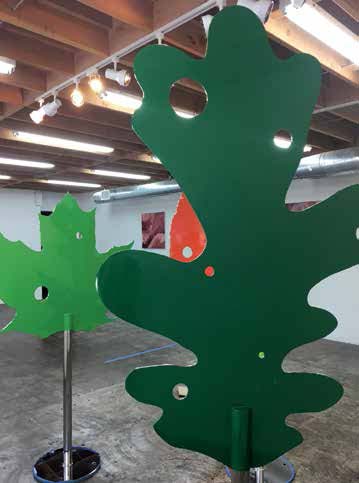 “Henry’s offers smooth, blemish-free satin and mirror finishing on many metals, including aluminum, stainless steel, brass, copper, and bronze,” Nikutowski said. The company’s equipment includes polishers, belt sanders, and buffers working with grits from 60 grit up to 600 grit. Parts can be up to 20 feet long by three feet wide.

“I have one polisher who has been with us for 38 years,” Nikutowski said. “We have a welder with 25 years of experience.”

Henry’s services include pre-polishing, finishing of welds, repairs to incomplete welds, and repairs to pits and voids. The company offers touch-up welds and light machining. Its value-added work includes engineering, production, design, fabrication, assembly, and final packaging. About 70 to 75 percent of the finishes are done on stainless steel. Another 10 to 15 percent is aluminum. Brass is third. Steel is fourth.

“The uniform delineated grain gave the stainless steel depth and character,” Nikutowski said. “It’s a cool, clean look. It doesn’t reflect the light too much. It appeals to the eye.”

After finishing about 95 percent of the staircase polishing, the stainless steel components were returned to Long Beach for final assembly into one structure. The piece, now welded together into a one-piece two-story stainless steel staircase, was finished by Henry’s polishers, who sanded the welds and smoothed out the transitions using fiber disks from 36 to 120 to remove the excess material and prepare the surface for final hand graining. It was driven to Beverly Hills, where a crane lifted it into the building. Workers set it in place, leveled it, and attached the stainless steel connectors to hold the glass stairs.

“After you weld, you have weld marks, heat discoloration, and heat distortion,” Nikutowski said. “We had to grind all that down and create a pre-finished surface. Then we have to grind in the finish. Graining is the second part: The grain is a uniform 120 that is then finished with Scotch-Brite™ to take off the edges.”

“After you weld, you have weld marks, heat discoloration, and heat distortion,” Nikutowski said. “We had to grind all that down and create a pre-finished surface. Then we have to grind in the finish. Graining is the second part: The grain is a uniform 120 that is then finished with Scotch-Brite™ to take off the edges. That’s a common procedure. Other customers prefer the scratch feel and they skip that last step. The building was being constructed at the time. They didn’t put the roof on until the very end.”

Henry’s Metal Polishing finished a series of six stainless steel leaves cut from ⅜-inch sheets into the shape of leaves, and then polished to a #8 mirror finish. The artist is Hiromi Takizawa of California State University Fullerton. The leaves will be installed in downtown Santa Ana.

“She’s supplying us with the materials. We’re polishing them on one side. They will be masked and then painted on the other side,” Nikutowski said. “It takes a lot of time and effort to get it right. You have to be careful masking it so the paint does not bleed over onto the polished side.”

Robots with Sticky Feet Can Climb Up, Down, and All Around