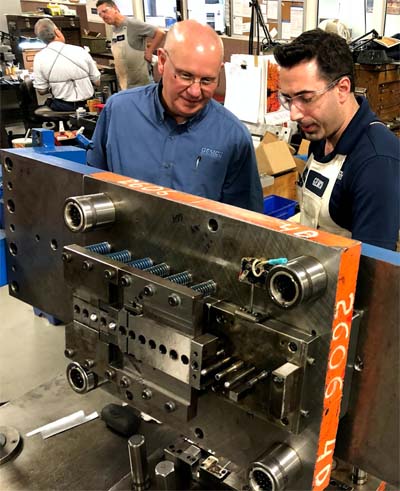 Gemco Manufacturing offers a diverse range of metal forming equipment, significant capacity, and a proactive design team to assist in the fabrication of custom tooling for production of high-quality, precision metal components.

Since 1943, Gemco Manufacturing Co. has manufactured  custom precision parts like electrical connectors, spring clips, and terminals, all produced from high quality tools that continue to be designed and built in-house. The firm’s progressive dies and fourslide tooling, built to exacting standards, turn out parts for the automotive, medical, telecommunications, and consumer electronics industries. They’re also used to manufacture parts for hardware, power tools, and residential and commercial lighting, among other applications.

In 1943, Gemco was stamping parts like flat springs, contacts, switch leafs, and connectors at its Plantsville, Connecticut factory. Those parts were used in the manufacture of children’s toys and games, toasters, thermostats, and a wide variety of products beyond that. At that time, Gemco was primarily a fourslide manufacturer, with power presses and secondary operations often used to complete some of the more complex components. In 1988, the company added production presses to its manufacturing processes and, in 1994, in-house Wire EDM capabilities. The addition of Wire EDM technology provided Gemco with the ability to produce higher-precision fourslide and progressive die tooling.

Today, tools and technology such as Solid Works and upgrades to the Wire EDM process all play a part in the design and manufacture of customers’ tooling.

These days, the modern 40,000-square-foot Southington plant houses the talented personnel and machinery that produce terminals, terminal blades, flat springs, connectors, spring clips, heat sinks, surgical tray hardware, and power busbars. In addition to these custom stampings and wire forms, Gemco produces components that include features such as tapped holes, inserted contacts  and rivets, as well as reel-to-reel applications where terminals are produced on continuous bandoliers for customers that incorporate automation in their manufacturing processes.

“Gemco will always offer our input and our experience throughout the tool design and build process, but we are at our strongest when we are involved with the initial development of the component,” said DiVenere. “We are sometimes able to point out areas of concerns, along with potential cost saving opportunities.”

Mark DiVenere is the grandson of Dominic DiVenere, a co-founder of Gemco with four other partners who started  the company in 1943 while working full-time jobs with other manufacturing firms.  Over the years, the other founding partners left the company, and  Dominic DiVenere assumed full ownership in the late 1970s. Dominic, then chairman, passed away in 2000. His son, Peter, who began his employment at Gemco in 1960, led the company as president from 1986 until his passing in 2005. Mark, who began working at the company in 1986, took the reins from Peter.

Gemco has customers across many major industries, including lighting controls, automotive clips and fasteners. medical trays, telecommunications, home appliances and power terminals. Gemco also manufactures components for the aerospace industry along with some components that are used in both commercial and military applications. “Gemco has effectively worked to diversify our customer base in order to better insulate the company from instabilities that may arise in particular industries,” DiVenere said. 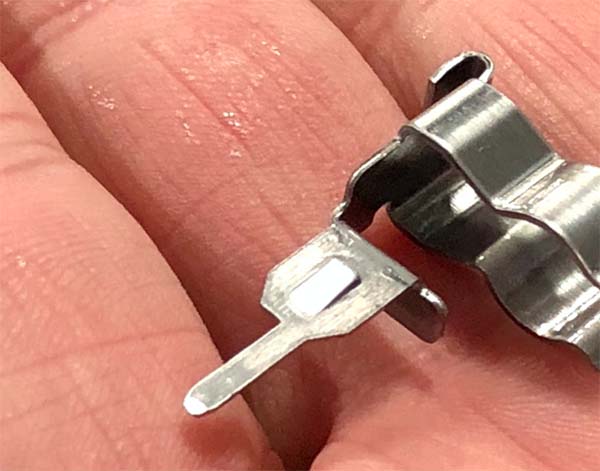 This clamp, produced by Gemco Manufacturing, is part of a light assembly made from high carbon steel on a fourslide machine. Photo by Mark Langlois.

Gemco (www.gemcomfg.com) turns out 15 million tinned-brass parts per year that include contacts which are inserted in the progressive tool. The company uses real-time monitoring systems and sensors incorporated into the tools to ensure that each part has the contact. The customer uses automated equipment to manufacture its product, and a single failure would be significant.

“Each of Gemco’s manufacturing processes provides the opportunity to produce close-tolerance, high quality components. The tolerances associated with the various components that we manufacture vary from part to part, with some produced to fractional tolerances, while others require a range of plus or minus 0.005-inch or less,” DiVenere said. “Fourslides provide us with a cost-effective solution—the initial investment is less than it is with a progressive tool. It can also be three-dimensional. On a fourslide, you are able to form the part from multiple angles and planes, while the progressive die option can sometimes present limitations. ”

Examples of parts that Gemco can hold to within plus or minus 0.005-inch tolerance include terminals used in switches, dimmers, and motor assemblies; automotive interior lighting; surgical tray inserts; small components for medical devices and hand-held scanners; and control pad components for home appliances. The company also produces high precision fasteners for farm equipment, automobiles, refrigeration units, and office systems; and blades, connectors, and contacts for the electrical and electronics industries.

DiVenere said that many of his customers refer to Gemco as a “low maintenance” vendor or business partner. “ Gemco will always help assist in managing a customer’s part through the design and manufacturing process, so that the customer doesn’t have to,” he said. The company maintains full control over production, designing and fabricating all tooling in-house. To aid this process, DiVenere said, Gemco will ask its customers about their expectations regarding forecasted annual production demands and durations of their projects.

“These factors provide us the opportunity to quote a production tool that will meet the customer’s demands with regard to dimensional accuracy and overall quality, while keeping in mind the need to ensure that the tool investment is manageable,” he said.

The company’s tool makers are trained through a combination of state apprenticeship programs, on-the-job training, college, and manufacturer training for new equipment.

“We’ve had the good fortune to retain good employees, but it’s still a challenge,” DiVenere said. “We work with the tech schools and community colleges that offer advanced machining and CNC machining. There seems to be a growing awareness that manufacturing is a good career choice—it’s just a big ship to turn.”

Gemco bought its first EDM machine in 1994, and its tool makers at the time liked it. “It provided Gemco with the opportunity to manufacture more precise tools and modify those tools when and if it was necessary, without having to start over,” DiVenere said.

Quality Engineer, Tool Engineer Collaborate to Get it Right the First Time

“They select the tool steels—it’s really dependent on the metal the component is produced from and the volume we’re working with,” DiVenere said. “Higher density is used for the higher number parts. Certain tool steels perform better with certain metals—experience teaches that. We discuss it with the tool steel suppliers, who make recommendations. The selection is the result of conversations between the toolmakers and the tool engineer and is based on experience. They know if the metal will work for that particular application. 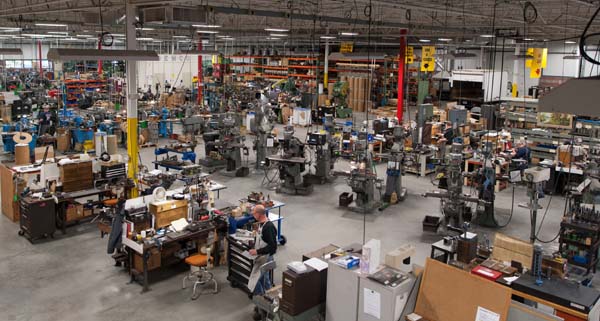 “It’s part of our process and we think we’re better at it than most; we draw on our experience,” he continued. “We hope to get it right the first time or second time, unlike someone else who gets it right the third or fourth time. It really depends on the complexity of the part: We have designed and built simple progressive dies in two to three weeks, while more intricate tools, used to manufacture complex parts, can require 12 to 14 weeks or more.”

“Gemco does not outsource tooling,” DiVenere added. “We pride ourselves in the fact that by designing and building our customer’s tools in-house, we maintain complete control of the project.”

Class A Tooling Makes Efficient Use of Materials

DiVenere explained to the customer that it was paying a higher price for its parts because of the tool that its supplier—Gemco’s competitor—designed. He said that if Gemco had designed the tool, there would be less wasted material and the parts would be less expensive. “It’s a more efficient use of materials,” he said.

“Gemco designs and builds what we consider to be Class A tools, which take into consideration the tolerances that are presented on the customer’s prints,” DiVenere explained. “If exceptions need to be made, the customer is advised of them at the time of the quotation—or advised of our concerns that may or may not have come about during first article inspection and subsequent submission. We may offer the customer options they were not aware of. By evaluating your part and understanding its application, our experienced tool designers will let you know the best way for you to get the part that fulfills your application and business objectives.”

Fixing Problems Before They Arise

Effective communication remains essential throughout the entire design-through-production cycle, beginning with the request for quote.

“During the quotation process, prints are reviewed with Gemco’s engineering, quality, and production personnel,” DiVenere said. “In some instances, conversations are had with outside business partners, such as our heat treat and plating vendors, as their processes can sometimes negatively impact certain dimensions.”

Depending on the part and the customer requirements, Gemco can tap and insert contacts into a part as it is stamped, without any secondary process. It can also insert rivets, PEM™ fasteners, and screws during the stamping process. In general terms, its engineers look to find cost savings by slightly modifying the proposed design, or by adding features or minimizing material waste.

DiVenere said that reaching the right precision and right price involves fixing problems before they arise. That means raising questions early in the design process. He emphasized that by working with Gemco’s engineers and trusting their design and manufacturing expertise, customers benefit during the design stage.

“Gemco has a very ‘seasoned’ and experienced work force,” DiVenere said. “The expertise that has been developed here, over many years, is often seen by our customers as a resource, an extension of their engineering team. Over the years, we’ve focused on assisting buyers, and, in some instances, engineers, with better understanding the fourslide tooling and progressive die process. By offering both processes, we are well-positioned to provide our customers with options not only regarding how parts are manufactured, but also by helping to identify cost-saving opportunities in the individual part design before moving forward with production.”

Mobile Autonomous Robots Are Built for the Long Haul

Blurring the Lines Between OEM and Aftermarket Parts