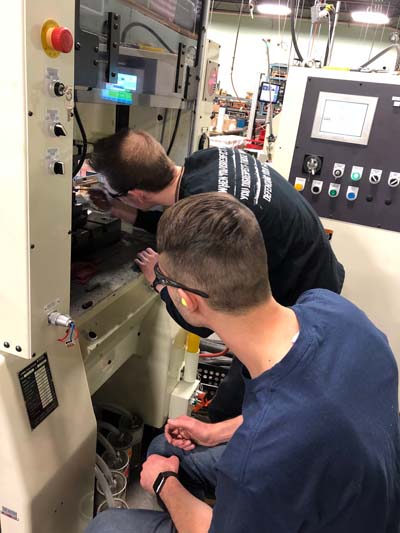 Quality is everyone’s job at Marion Manufacturing, a high-speed metal stamping firm that ships parts across the U.S. and to far corners of the world.

When you ask Marion Manufacturing President Douglas Johnson for some big numbers, he offers up two million parts per day. That’s one part for one customer. It’s a tiny stainless-steel stud, progressively stamped, all day, every day, with all the parts photographed, inspected, rejected, or approved.

“It can’t stop,” said Johnson, speaking about manufacturing that part at the 73-year-old Cheshire, Connecticut, firm. Marion Manufacturing is a progressive die stamping company, which grew out of a tiny company founded in 1946 on Marion Avenue by the Cramer family, who got their start at Scovill Manufacturing in Waterbury, Connecticut.

“All critical dimensions for each part are checked using a three-camera sorting machine, which was designed specifically for this part,” Johnson said. “These parts are stamped and passivated. After passivation, they are 100 percent inspected and packed by the sorting machine—no inspector or packer needed.”

Those steps, which follow international quality standards, “are designed to keep any defective parts from reaching our customers, while also preventing any shipping or rejection costs for ourselves and our customers,” he said. “We are constantly looking for new ways to improve our efforts to make sure the quality of product and services provided by our company stays competitive and efficient. Investing in quality inspection technology, like the technology used for this part, has helped us do just that.”

“The company mindset, capability of teamwork, and enriching atmosphere all lead to a strong quality program across the entire company,” said Marion Manufacturing Quality Assurance Manager Katie Barry, during an interview at Marion’s facility. “These things, along with dedication and mindfulness from all employees, have led to successful maintenance of these certifications for more than a decade.”

The company runs a preventive and predictive maintenance schedule on the progressive die tool used to stamp the stud part, said Barry. Because ISO and IATF standards are demanding, and because an OEM’s manufacturing pace is typically relentless, Marion keeps replacement tooling components ready so that there are no delays when a tooling component wears out.

According to Barry, after Marion stamps about 5 million parts, the tool is taken from the machine and sharpened. After 10 to 15 million parts, tool components that can’t be sharpened again are replaced. Marion’s EDM room maintains a relentless pace to keep up with replacement spare parts. Barry said that being able to maintain stock of replacement parts has helped Marion increase press uptime and consistently hold tolerances within tenths of an inch.

“We have the ability to make a lot of replacement components in house,” said Tyler Johnson, a young toolroom apprentice. Marion has a room set aside for its wire EDM equipment. On the wall is a new electronic scheduling system that reminds workers exactly what parts they need to build  that day and what’s upcoming. Recent equipment purchases include a new Makino U3 Wire EDM machine and a CNC EDM drilling machine. This new technology has allowed Marion to cut costs of outsourcing tooling components and focus on in-house tool design and builds. 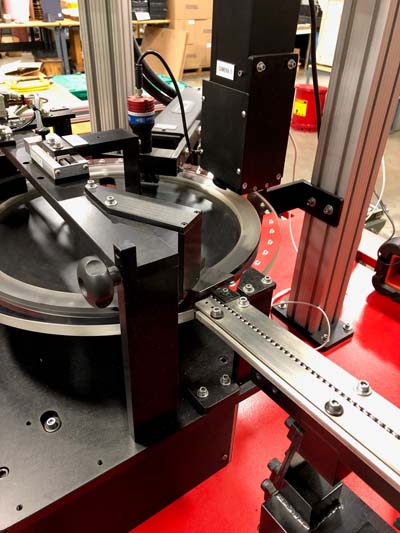 Marion’s sorting machine is used to 100 percent sort and pack the second highest running part in the company’s shop. This sorting machine was built specifically for the stud part. Photo courtesy of Marion Manufacturing.

“We offer a full range of tool design and build to exacting needs, with full production capabilities in metal stamping, wire forming, CNC, Wire EDM, and assembly,” Douglas Johnson said. “We manufacture drawn metal eyelets used in the manufacture of ECG electrodes that monitor a patient’s heartbeat. We stamp out a multitude of electrical components used for things such as cable wires and electrical connectors. We use four-slide forming to manufacture the thermostat for the cigarette lighter, which is now used as an electrical charging port in your automobile.”

Johnson added that Marion’s biggest strength is its ability to compete in high volume, high-speed stamping.  A second, high-numbers part (40 million per month) that Marion makes daily is a small component used in the telecommunications industry.

“With this job, in particular, we have been able to compete with China—our price is better, our service is better, and our quality is better. We have spent a lot of money and time to do so, but it has been a very successful venture for us. Knowing that we have played a part in keeping a job here in the USA is a huge deal to us.”

Marion has been successful against offshore competition, Johnson said, and has helped several OEM accounts reshore components back to the United States.  “We have not only successfully reshored jobs, but we have also gained jobs to where we are shipping parts to other countries because of our quality and price. That has picked up more customers for us,” Johnson said. Marion ships parts across the United States, and to Mexico, Dominican Republic, Puerto Rico, Germany, China, Canada, India, Austria, and Ireland.

“We push our employees to take pride in their work, to be involved, and we hold each employee to high standards,” Johnson said. “We do this to help them reach their maximum potential. We believe that if an employee knows they are putting their ‘signature’ on every part, it encourages them to perform at their best.”

When the company began in 1946,  Connecticut was the home of dozens of clock firms, including the Waterbury Clock Company, which later became the Ingersoll-Waterbury Company, followed by United States Time Company, and, eventually, Timex; Seth Thomas, which gave its name to the town of Thomaston, Connecticut; and  the William L. Gilbert Clock Co., of Winsted.

“The family had an opportunity to do some stamping after hours,” Johnson said. “They made clock hands in 1946. The first five items they made were clock hands for Timex and Seth Thomas.”

Immediately after the Great Depression and World War II, business was booming. A production run back then was one part up to a few thousand parts. A giant production run was 10,000 parts. Today, a busy stamping company like Marion helps inventors with one-off prototypes while turning out millions of parts each day for its regular customers.

Marion moved beyond the clock industry. Today about 55 percent of its business is in telecommunications, while another 10 percent is in medical. Automotive is about 20 percent of the business. The balance is in commercial and new technologies, including solar, wind, battery, and others.

The whole world market is bigger today, added Barry, so the market for parts is giant compared to what it was in 1946. “It’s our job to make sure we stay diversified,” she said.

“Providing quality product at a sustainable cost is what gives us an advantage over our competition,” she said. “We use statistical process control methods and a goal of zero defects to ensure our work. Continuous improvement also contributes to our highest quality standards, which includes process conformity, repeatability, efficient use of resources, minimal waste, and competitive pricing.”

One of the company’s automotive parts is a tin-plated copper stamping that is part of a sub-assembly used in a radio frequency key fob. Another automobile part is a copper electric lamp connector for a lighted car visor. As cars shift from gasoline to electric, the number of parts that automotive OEMs need is dropping. One of the challenges that job shops face with automotive customers is that the automotive OEM always wants to lower the price.

“It’s a constant drive down,” Johnson said. “From the moment you get it to the moment you lose it, you face downward [price] pressure. The automotive industry is a difficult industry to serve for a small company. The shift from combustion to electric isn’t helping because the number of parts required is falling by more than 30 percent. We watch it closely. You don’t need the same muffler system. You don’t need the same braking system. The systems that are left are smaller. This means that there is a significant loss in metal stamped components going into these new vehicles, which hurts the manufacturing industry across the board.”

An electric car has no clutch pedal on the floor. It doesn’t have a full transmission and may only have one gear. For example, the Tesla Model 3 has one gear from zero to its top speed. The electric motor has one moving part. Numerous maintenance issues on gasoline cars disappear on electric cars, including an oil change, spark plugs, air filters, timing belts, head gaskets, and fan belts, among others.

While fewer parts are needed, electric cars and autonomous cars require new parts for their new technologies. “We have been able to maintain many automotive jobs with applications such as components for ball bearings, washers, small electrical components for lighting, and brackets,” Johnson said. “The key to staying in the automotive industry is providing competitive pricing and producing a better part than the next company.”

Marion has already started making one new part that arose from a traditional car part. Johnson said Marion used to make cigarette lighters for cars, and 10 years ago everyone was convinced that business would disappear, at least in the United States. Who smokes anymore? Instead, new cars have three, four, or more electrical ports shaped like the old cigarette lighters. That’s where people plug in their electrical devices. Now automotive OEMs are aiming for electronics to keep people connected. Johnson said Marion expects to find other, similar opportunities in the future as the electric car market grows.

For that and because of the projected growth, Johnson said he watches the automobile market closely. He said Marion is looking for more opportunities like the power outlets in electric cars, while at the same time moving into other industries, away from automobiles in general. “It’s been evident since the slowdown in 2007-2008,” he said. “We’re not consciously moving away from automotive, but we’re diversified, which provides sustainability moving into the future.”

Why Design Checking Is Necessary