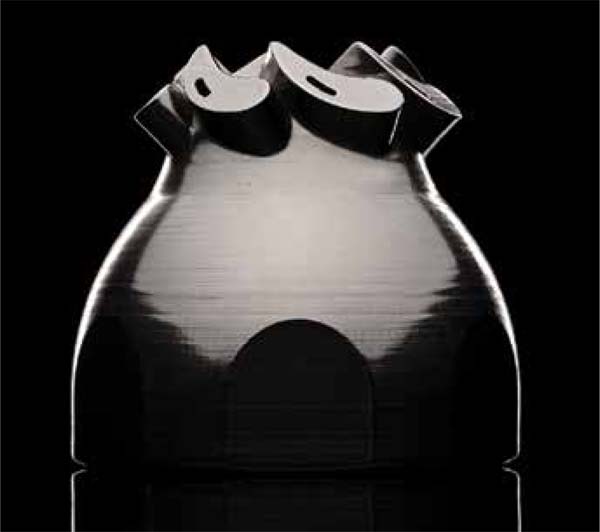 Printed by the Studio System, this fuel atomizer is radically redesigned to function in a more fuel-efficient manner than is achievable through traditional metalworking means. (Photo: Business Wire)

BURLINGTON, Mass.—Desktop Metal recently closed a $160 million funding round, led by Koch Disruptive Technologies (KDT), to advance the global commercialization of its metal 3D printing technology. The company’s combined funding  since its 2015 inception stands at $438 million, reported to be the largest total funding of any private 3D printing company to date.

Koch Disruptive Technologies, a subsidiary of Koch Industries, is an investment firm focused on finding and funding innovative and emerging technologies.

“Desktop Metal’s 3D printing solutions can redefine prototyping and mass production of metal products, which has profound disruptive implications for manufacturers like Koch Industries,” said Chase Koch, president of Koch Disruptive Technologies, in a press release. “We are very bullish about the prospects of Desktop Metal, not just as an investor, but also as a customer and partner.”

The Desktop Metal Production System is reported to be the world’s fastest metal printing press for mass production, capable of printing more than 100 times faster than laser powder bed fusion systems in the market. The system is designed to print a broad range of alloys, including reactive metals, such as titanium and aluminum.

In the plastics world, most of the 3D printing is done by engineers in the office. The Studio System is said to be the world’s first metal 3D printing system capable of printing and sintering metal parts in an office environment, delivering the same accessibility to which product developers in the plastics industry are accustomed. The Studio System is now shipping in volume and available through a global sales network of more than 85 sales partners in 48 countries.

“We are at a critical juncture in the advancement of metal 3D printing and additive manufacturing,” said Ric Fulop, CEO and co-founder of Desktop Metal. “We are excited about Koch being an investor, customer, and capability provider in this round. This new funding will fuel the continued development of our metal 3D printing technology and rich product roadmap, the scaling of operations to meet a growing demand of orders, and the financing of major new research and development initiatives. Combined, this will set us on a trajectory to become a global leader in metal 3D printing, a key pillar of Industry 4.0.”