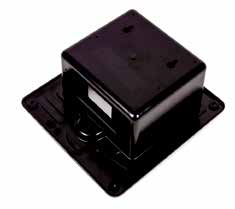 To produce this enclosure, David Wolfe Design built a mold that used air poppets and eliminated the need for an ejector box and pins. The design reduced the cost of the mold significantly lower than it would have been for a fully automatic mold. Photo courtesy of David Wolfe Design, Akron, Ohio

It’s relatively rare to find a company that will design and build molds for small-lot production of specialty parts. But some companies, like David Wolfe Design, have devised ways to do it economically for all involved.

David Wolfe Design (DWD) offers design and custom manufacturing services, primarily for customers seeking plastic parts or molds for applications in the automotive, industrial equipment, medical, housewares, and sporting goods industries, among others. The Akron, Ohio-based company traces its roots back to 1985, when David L. Wolfe, father of the firm’s current president, David K. Wolfe, started the business as a design service for plastic injection molds. Since then, DWD has expanded its design services to include designs of parts, fixtures, and other types of molds. The company has also added laser scanning, inspection, and reverse engineering services.

“Our design group is still the core of our business, with decades of experience in the plastics industry,” David Wolfe wrote in an emailed response to D2P. “This allows us the opportunity to study a best approach to any project.”

One of the firm’s lesser known design services is a tooling feasibility study, which Wolfe said is very similar to a design for manufacturing (DFM) analysis. The tooling feasibility study is most beneficial when done early in the process of part design, before the part has been prototyped or submitted for approval. It may include reviewing the part design “for features that may require complicated mold actions,” according to DWD’s website.

“We can take a customer’s part design and review it for ease of manufacture, and then offer suggestions to make part changes that would make molding the part easier or less expensive,” Wolfe wrote.

After completing the tooling feasibility study, DWD creates a preliminary mold design and delivers it to the customer, who can then send it with their request for quote (RFQ) on building the mold.  “This helps purchasing to secure a more ‘apples to apples’ set of quotes,” Wolfe added. “This is especially helpful when dealing with overseas tool shops.”

Today, DWD is a vertically integrated company that provides, in addition to its design services, a variety of part molding, forming, and custom machining services for prototypes and low-volume production. By providing diverse processes, the company can offer customers options that they’d otherwise need to source from multiple vendors, Wolfe explained.

“We can give customers an unbiased view of which processes might be best for them,” he wrote.

“Our primary focus is small lot-size production, which is more typical for machinery manufacturers who are producing specialized equipment.”

Product manufacturers know how difficult it can be to find a molder that’s willing to build tooling to injection mold just a few dozen parts. David Wolfe Design has established a niche in in low-volume molding that solves this problem.

“We routinely produce injection molded parts in quantities as few as 10 to 20, or as high as 10,000,” wrote Doug Pryor, vice president of David Wolfe Design, in an emailed response.

David Wolfe Design also employs several processes—including milling, turning, grinding, heat treatment, and EDM—to manufacture a line of mold components, including machined thread inserts for rotational molds, and air poppets for plastic injection and compression molds. The air poppets (www.airpoppet.com), which relieve vacuum created inside a mold when the mold is opened or the part is ejected, can help ease the removal of deep draw parts from the mold, according to DWD’s website.

As a sub-contract design firm, David Wolfe Design sees many of the latest technologies and applications and can selectively incorporate some of them into its repertoire. “We are always learning, whether seeing the latest technologies at the trade shows, sending our employees for training in CNC programming and machining, or investing in the latest equipment and software, such as our FARO Laser Scanner and 3D printer,” Pryor wrote.

A Better Way to Make a Monitor Enclosure

One customer required an enclosure to house an LCD screen/controller, approximately 6 inches by 6 inches by 4 inches deep, with a contoured fascia that framed the LCD screen. Wolfe said the enclosure, which had multiple hole patterns on several faces of the part, posed many challenges. The customer, who originally asked for an ABS thermoformed part, required fewer than 200 parts per year for an undefined number of years.

“The part would be a short run, had to have a high-quality finish, and [required] many holes and odd cutouts on different faces,” Pryor explained. “A mold would have required moving elements to form these holes and openings and allow it to be removed from the mold. The injection mold to create the part would have been very expensive for so few parts per year.”

“We advised them of the benefits and shortcomings of each process,” Pryor wrote. “In the end, it made sense for them to choose an injection molded shell that was trimmed in the same manner as a thermoformed or urethane part would be.”

David Wolfe Design built a mold that used DWD’s air poppets. The mold, therefore, only needed the cavity and core block, without requiring an ejector box or pins. This allowed the pricing to be significantly lower than it would have been for a fully automatic mold, Pryor explained.

After the customer chose to go with the injection molding process, DWD was able to build the mold, mold the parts, and trim the parts on its 5-axis router. Later, the holes and openings needed to be relocated on the part.

“By modifying our program, the change was relatively inexpensive. Had the mold been a fully automatic tool with slides, we would have had to produce a new set of slides,” Pryor noted. “The part has now been in production for 12 years, with only minor costs for maintenance.”

Research at Sandia Looking at How Brittle Materials Fail