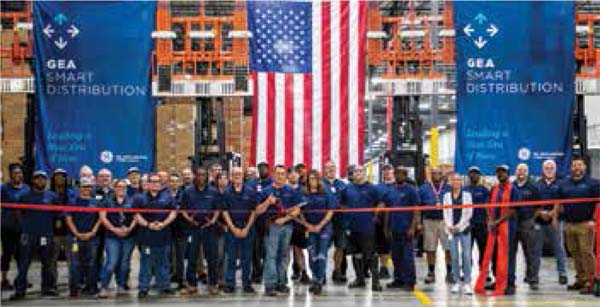 New employees at GE Appliances’ new smart warehouse in Commerce, Georgia – representing some of the 100 new jobs created for the facility – prepare to cut the ribbon and celebrate the opening of the location. (Photo: GE Appliances, a Haier company)

“Georgia has been a longtime home for GE Appliances,” said Kevin Nolan, chief executive officer for GE Appliances, in a statement. “Our goal continues to be to become the leading major appliance business in the U.S. These investments and job expansions will help us do just that.”

The $43 million investment in the company’s affiliate, Roper Corporation, in Walker County is to create new manufacturing capacity and launch several new cooking products. This investment is expected to create 100 new jobs, which will move total GEA jobs at the facility to more than 2,000 employees. Roper produces cooktops, free-standing ranges, and wall ovens under the Monogram®, Café™, GE Profile™, and GE® brands.

The $32 million investment to build a new Southern Logistics Center in Murray County has been designed to take advantage of Georgia’s decision to expand the Port of Savannah to handle large trans-Pacific container ships, reducing reliance on cross-country trucking from West Coast ports. Connecting the port at Savannah by rail to the Appalachian Regional Port (ARP) in Northwest Georgia brings the benefits of the maritime port some 388 miles inland. This investment and the 100 new jobs that it creates is expected to bring numerous  opportunities to the Murray County area.

“I am very pleased with the performance of our industrial development authority and all involved with the project,” said Murray County Sole Commissioner Greg Hogan. “This will bring a diverse job mix and a welcomed new investment to our community. With the opening of the Appalachian Regional Port in Murray County in August of 2018, we are anticipating more opportunities such as this. The quality of jobs and investment this project is bringing to our community is just the beginning of a long corporate citizenship we want to achieve in Murray County.”