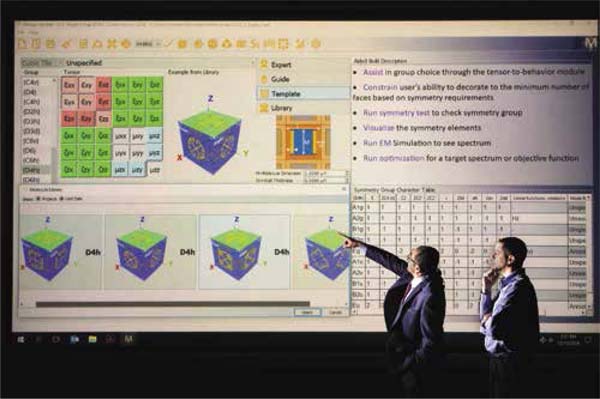 Program is free for many federal government projects

Sandia National Laboratories has created the first inverse-design software for optical metamaterials — meaning users start by describing the result they want, and the software fills in the steps to get there. The modern design approach takes guesswork out of engineering as-yet theoretical technologies, like ultracompact, high-performance cameras and cloaking armor that could make wearers invisible to detection.

Sandia uses the design aid, called Mirage, in its research and development programs and released a test version to select collaborators last year. Now, researchers working on government metamaterial projects can request a license at no cost.

Man-made, optical metamaterials have been touted for more than a decade for their ability to manipulate light in extraordinary ways. In theory, satellite imaging and interstellar telescopes could be dramatically smaller with metamaterial lenses one hundred times thinner than conventional ones. Or, the technology could someday lead to cloaking materials that deflect light around them, rendering objects impossible to see.

Mirage simplifies and automates the design process for materials that would be necessary for those technologies.

Mirage Takes Guesswork Out of Design

The field of optical metamaterials has so far struggled to deliver on all its perceived promise of revolutionizing optics. One difficulty for engineers has been that metamaterials are made of tiny building blocks, called meta-atoms, which can be designed in countless variations. A certain shape, collectively, might bend light. Change that shape, the size, the spacing, or the material,  and that might amplify the effect or diminish it or cause something entirely different to happen, like twist the light one direction or another or change its intensity or color.

“Predicting what the bulk ‘homogenized’ properties will be has been very hard to determine until now,” said Mike Fiddy, a program manager in the Defense Advanced Research Projects Agency, or DARPA, which funded the software’s development.

Other software can simulate what meta-atoms will do to light, but that only allows researchers to use intuition to experiment with different designs until they stumble upon or tediously work out the behavior they want.

Despite the challenge, some researchers have had success creating imaginative metamaterial devices. Sandia invented a device that converts heat to electricity, potentially for more fuel-efficient engines, and a light-mixing technology that could lead to a new, changeable, multicolored light source, which could accelerate all kinds of research from archeology to biomedicine.

But on the whole, said Sandia scientist Ihab El-Kady, the metamaterial enterprise has needed a boost.

“We cannot possibly solve this problem by trial and error,” said El-Kady, who conceived Mirage. “Instead, we could do the opposite. We could say: ‘Here is the behavior I want. Now tell me what the metamaterial looks like.’”

No tool used this inverse-design approach. So, El-Kady and his team at Sandia’s National Security Photonics Center built one.

User-Friendly Instructions to Exploit 100-Plus Templates

Mirage lets users start by telling it the optical property they want — how their metamaterial needs to interact with light — and their starting materials. Mirage generates designs that match those criteria from a library of more than 100 templates. Or, users can draw their own designs, and the program will check them for errors.

“Mirage is an all-in-one tool,” El-Kady said. “Not only does it tell you what the metamaterial looks like, it allows you to explore various configurations, simulate the system, validate the chosen behavior, visualize its response, and optimize its functionality within your fabrication constraints.”

On top of that, said Sandia Senior Scientist Igal Brener, who uses the software in his metamaterial research, Mirage is useful because it includes algorithms that help researchers get the best performance from their inventions.

Brener’s team previously created a material that can mix two lasers to produce 11 colors at once, including infrared and ultraviolet light. Potentially, this technology could be developed into tunable lasers that replace single-color ones.

But some of those colors are too dim to be useful, so he’s exploring ways to brighten the output. Other software packages Brener has used include simple optimization algorithms. However, to use more advanced algorithms, he must supplement those packages with his own coding. Not so with Mirage.

If the initial launch is successful, Sandia plans to develop a second version of Mirage, tentatively called Mirage Elite, that would introduce a surge forward in optimization by automatically morphing meta-atoms into bizarre and outlandish shapes in the hunt for undiscovered behaviors.

Mirage runs on Windows and can be configured to operate on laptop, desktop and multicore machines. Researchers interested in a copy of Mirage are invited to contact Sandia for more information. To be eligible for a free copy, recipients must first have a valid research contract with the U.S. government.