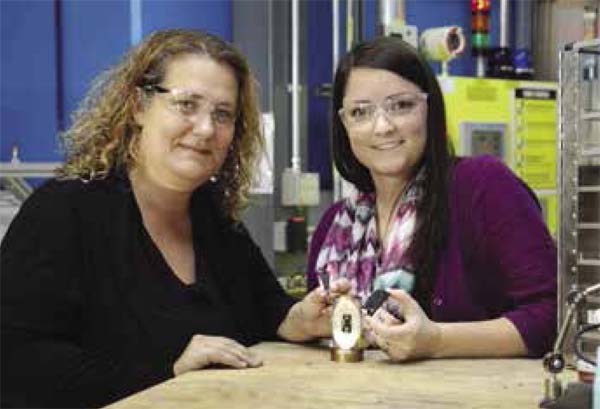 Pictured are Bianca Haberl (left) and Amy Elliott, both of ORNL. Haberl is a neutron scattering scientist and Elliott is a member of the R&D team for manufacturing systems research. Photo courtesy of Genevieve Martin/Oak Ridge National Laboratory, U.S. Dept. of Energy

NORTH HUNTINGDON, Pa.—The ExOne Company  has licensed from the Department of Energy’s Oak Ridge National Laboratory (ORNL) a patent-pending method of 3D printing aluminum-infiltrated boron carbide (B4C) collimators and other components used in neutron imaging. Researchers at ORNL developed the method of 3D printing on the ExOne M-Flex®, a 3D printer that uses binder jetting technology to 3D print objects in metals, such as stainless steel, bronze, or tungsten, as well as sand, ceramics, and composites.

In this instance, a team at ORNL led by David C. Anderson, group leader of instrument engineering, developed a process to 3D print objects in B4C, a neutron-absorbing material, and then infiltrate the objects with aluminum. Infiltration occurs when a material is wetted or absorbed into another material, such as when water is absorbed into a sponge. The final aluminum-infiltrated B4C material is known as a metal-matrix composite, a type of cermet.

Co-inventors of the process include ORNL’s Amy Elliott, a member of the R&D team for manufacturing systems research; and Bianca Haberl, a neutron scattering scientist.

The development is significant because aluminum-infused B4C has strong but lightweight properties. It also has energy-absorbing characteristics that are particularly useful in neutron scattering instruments, which enable researchers to capture data down to the atomic level. That data is then expressed as an image, in much the same way that data in a digital camera is shown as a picture.

“It delivers results that X-rays can’t. Neutrons can detect light elements, like hydrogen or water, but they also penetrate through heavy elements like lead, which enables analysis of complex processes in-situ,” explained Dan Brunermer, technical Fellow, The ExOne Company, in a press release.

ExOne plans to use the license to commercialize the 3D production of aluminum-infiltrated B4C objects, such as shielding equipment and components used in neutron scattering instrumentation.

Using traditional methods, manufacturers face limitations in the shapes of collimators they can produce, which also limited the type of research and other work that could be done with them. The new method of creating B4C objects opens the door to new types of objects useful in deflecting or absorbing energy, which can protect people and the environment from radiation.

The new B4C material also means that ExOne can now offer its customers a method of 3D printing a metal material that is lighter than bronze. ExOne’s metal 3D printers, such as the new X1 25PRO™, are capable of 3D printing objects in more than six qualified metal materials, the company said.

“This research and the resulting license agreements demonstrate the value that the DOE Manufacturing Demonstration Facility at ORNL delivers to the manufacturing and science community at large,” Brunermer said.

UT-Battelle manages ORNL for the DOE Office of Science (https://www.energy.gov/science).