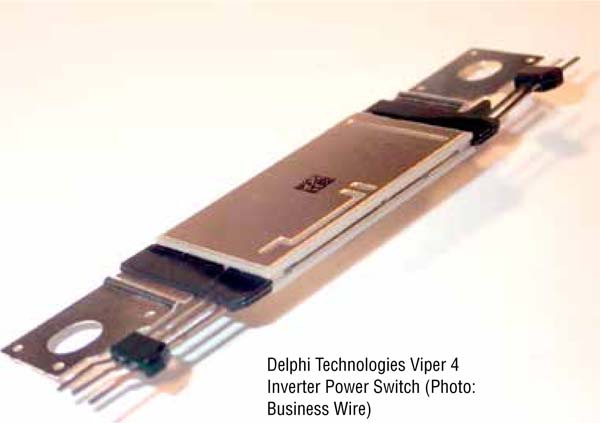 “Delphi Technologies is committed to providing pioneering solutions to vehicle manufacturers,” said Richard F. (Rick) Dauch, CEO of Delphi Technologies, in the release. “Our collaboration with Cree will create a significant benefit to automakers as they work to balance meeting stricter global emissions regulations with consumer appetite for electric vehicles. Overcoming driver anxiety related to electric vehicle range, charging times, and cost will be a boon for the industry.”

The adoption of silicon carbide-based power solutions is rapidly growing across the automotive market as the industry seeks to accelerate its move from internal combustion engines to EVs. IHS estimates that, by 2030, 30 million high voltage electrified light vehicles will be sold, representing 27 percent of all vehicles sold annually. Inverters are one of the highest-value electrification components, and their efficiency has an industry-changing impact on many aspects of vehicle performance, according to the companies.

“Cree’s technology is at the heart of the dramatic change underway in EVs, and we are committed to supporting the automotive industry as it transitions from silicon-based designs to more efficient, higher performing silicon carbide solutions,” said Gregg Lowe, CEO of Cree, in a statement. “This partnership with Delphi Technologies will help drive the adoption of silicon carbide in the automotive sector. As the world leader in silicon carbide, Cree is continuing to expand capacity to meet market demands with our industry-leading power MOSFETs to help achieve a new, more efficient future.”

Cree (www.cree.com) said in the release that it is committed to leading the global transition from silicon to silicon carbide. The company recently announced an expansion that it said would generate up to a 30-fold increase in silicon carbide capacity. Cree offers a comprehensive set of silicon carbide and GaN (Gallium nitride) power and RF (radio frequency) components through its Wolfspeed® business unit.

Taking an Independent Path: Strategies for Low Risk Sourcing of Components in a Constrained Market

UL-Recognized Fuse Clips Designed to Ensure Safety, Ease of Use on PCBs