Software to Empower Workers on the Factory Floor 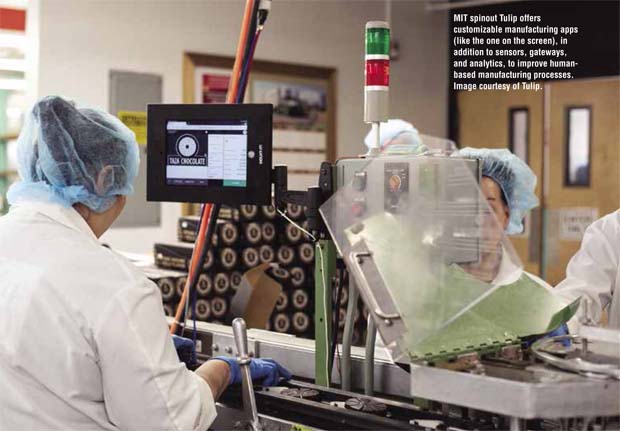 Apps developed by MIT spinout Tulip help manufacturers augment employee production rather than automating it away.

Manufacturers are constantly tweaking their processes to get rid of waste and improve productivity. As such, the software they use should be as nimble and responsive as the operations on their factory floors.

Instead, much of the software in today’s factories is static. In many cases, it’s developed by an outside company to work in a broad range of factories and implemented from the top down by executives who know software can help, but don’t know how best to adopt it.

That’s where MIT spinout Tulip comes in. The company has developed a customizable manufacturing app platform that connects people, machines, and sensors to help optimize processes on a shop floor. Tulip’s apps provide workers with interactive instructions, quality checks, and a way to easily communicate with managers if something is wrong. Managers, in turn, can make changes or additions to the apps in real-time and use Tulip’s analytics dashboard to pinpoint problems with machines and assembly processes.

“With this notion of agile manufacturing [in which changes are constant], you need your software to match the philosophical process you’re using to improve your organization,” said Tulip co-founder and CTO Rony Kubat (MIT ’01, SM ’08, Ph.D. ’12). “With our platform, we’re empowering the manufacturing engineers on the line to make changes themselves. That’s in contrast to the traditional way of making manufacturing software. It’s a bottom-up kind of thing.”

As the company continues building out its platform — including adding machine vision and machine learning capabilities — it hopes to continue encouraging manufacturers to see people as an indispensable resource.

With the platform’s scalable design, Kubat said it can help factories of any size, as long as they employ people on the shop floor. In that way, Tulip’s tools are empowering workers in an industry that has historically trended toward automation. As the company continues building out its platform — including adding machine vision and machine learning capabilities — it hopes to continue encouraging manufacturers to see people as an indispensable resource.

A New Approach to Manufacturing Software

In 2012, Kubat was pursuing his Ph.D. in the MIT Media Lab’s Fluid Interfaces group when he met Linder, then a graduate student. During their research, several Media Lab member companies gave the founders tours of their factory floors and introduced them to some of the production challenges they were grappling with.

“The Media Lab is such a special place,” Kubat said. “You have this contrast of an anti-disciplinary mentality, where you’re putting faculty from completely different walks of life in the same building, giving it this creative wildness that is really invigorating, plus this grounding in the real world that comes from the member organizations that are part of the Media Lab.”

During those factory tours, the founders noticed similar problems across industries.

“The typical way manufacturing software is deployed is in these multi-year cycles,” Kubat said. “You sign a multi-million-dollar contract that’s going to overhaul everything, and you get three years to deploy it all, and you get your screens in the end that everyone isn’t really happy with because they solve yesterday’s problems. We’re bringing a more modern approach to software development for manufacturing.”

In 2014, just as Linder completed his Ph.D. research, the founders decided to start Tulip. (Linder would later return to MIT to defend his thesis.) Relying on their personal savings for funding, they recruited a team of students from MIT’s Undergraduate Research Opportunities Program and began building a prototype for New Balance, a Media Lab member company that has factories in New England.

“We worked really closely with the first customers to do super-fast iterations to make these proofs of concept that we’d try to deploy as quickly as possible,” Kubat said. “That approach isn’t new from a software perspective — deploy fast and iterate — but it is new for the manufacturing software world.”

An Engine for Manufacturing

The app-based platform the founders eventually built out has little in common with the sweeping software implementations that traditionally upend factory operations for better or worse. Tulip’s apps can be installed in just one workstation and then scaled up as needed.

The app-based platform has little in common with the sweeping software implementations that traditionally upend factory operations, for better or worse. Tulip’s apps, which can be installed in one workstation and then scaled up as needed, can also be designed by managers with no coding experience, over the course of an afternoon.

The apps can also be designed by managers with no coding experience, over the course of an afternoon. Typically, they can use Tulip’s app templates, which can be customized for common tasks like guiding a worker through an assembly process or completing a checklist.

Workers using the apps on the shop floor can submit comments on their interactive screens to do things like point out defects. Those comments are sent directly to the manager, who can make changes to the apps remotely.

“It’s a data-driven opportunity to engage the operators on the line, to gain some ownership over the process,” Kubat said.

The apps are integrated with machines and tools on the factory floor through Tulip’s router-like gateways. Those gateways also sync with sensors and cameras to give managers data from both humans and machines. All that information helps managers find bottlenecks and other factors holding back productivity.

Workers, meanwhile, are given real-time feedback on their actions from the cameras, which are usually trained on the part as it’s being assembled or on the bins the workers are reaching into. If a worker assembles a part improperly, for example, Tulip’s camera can detect the mistake, and its app can alert the worker to the error, presenting instructions on fixing it.

Such quality checks can be sprinkled throughout a production line. That’s a big upgrade over traditional methods for data collection in factories, which often include a stopwatch and a clipboard, the founders said.

“That process is expensive,” Kubat said of traditional data collection methods. “It’s also biased, because when you’re being observed, you might behave differently. It’s also a sampling of things, not the true picture. Our take is that all of that execution data should be something you get for free from a system that gives you additional value.”

The data Tulip collects are channeled into its analytics dashboard, which can be used to make customized tables displaying certain metrics to managers and shop floor workers.

In April, the company launched its first machine vision feature, which further helps workers minimize mistakes and improve productivity. Those objectives are in line with Tulip’s broader goal of empowering workers in factories, rather than replacing them.

“We’re helping companies launch products faster and improve efficiency,” Kubat said. “That means, because you can reduce the cost of making products with people, you push back the [pressure of] automation. You don’t need automation to give you quality at scale. This has the potential to really change the dynamics of how products are delivered to the public.”

Identifying the Immediate ROI in the Industrial IoT