Industrial Exoskeleton Is Designed to Augment, Not Replace, Humans 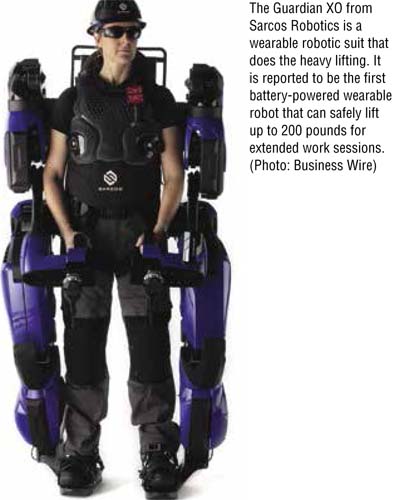 SALT LAKE CITY—Industrial robotics developer Sarcos Robotics recently unveiled the alpha version of its Guardian® XO® , an industrial exoskeleton designed to boost employees’ physical capabilities while helping to prevent injury. The Guardian XO is a wearable, full-body robotic suit intended for use in industries that require the lifting and manipulation of heavy materials or awkward objects not easily handled by standard lift equipment. It is designed to augment rather than replace humans, Sarcos said in a press release.

The Guardian XO bears the weight of the suit and payload, enabling an employee to lift up to 200 pounds repeatedly for up to eight hours at a time without strain or fatigue. By enabling superhuman strength for extended periods, the robotic suit may also help “level the playing field” for industrial workers by equalizing physical capacity. As a result of wearable robotics, roles that have historically been limited to those who meet specific strength requirements could potentially be performed by a more diverse talent pool, the company said.

The first Guardian XO alpha units are scheduled to begin shipping early this year to members of Sarcos’s Industrial Exoskeleton Technical Advisory Group (X-TAG) and the U.S. military. Commercial production units of the Guardian XO will begin shipping to customers in late 2020.

“The Guardian XO Alpha units are the culmination of twenty years of effort by our team and represent a huge step forward as we prepare to ship our first commercial Guardian XO wearable robots to our customers in the latter part of 2020,” said Ben Wolff, chairman and CEO of Sarcos Robotics, in a press release. “Delivery of our Alpha units represents the first time in history that industrial and military customers will gain access to a full-body, powered exoskeleton that can safely enable humans to intuitively lift and dexterously manipulate objects weighing up to 200 pounds, and walk at human speed for extended work sessions.

“With the growing shortage of skilled labor across industries and the rising social and economic costs associated with occupational musculoskeletal injuries, we have an enormous opportunity to benefit employees and companies alike.”

The Guardian XO has been under development for 20 years, with the initial vision and funding for the effort coming from the Defense Advanced Research Projects Agency (DARPA). The U.S. Department of Defense, leading Fortune 500 industrial companies, and private investors have provided additional funding over the years, Sarcos said in the release.

“The Guardian XO is a great example of what can happen when private industry and government join forces with a small, innovative team to address a common challenge,” said Wolff.

Sarcos’s X-TAG, assembled beginning in 2016 and announced in 2018, comprises leading companies across industries such as industrial manufacturing, oil and gas, utilities, logistics, construction, automotive, aviation, and aerospace. The X-TAG members have played an integral role in assisting with the functional design, as well as performance and safety requirements, to ensure that the Guardian XO meets the needs of myriad use cases across various industries, according to Sarcos.

“Full-body, powered exoskeletons have significant potential to transform the industrial workforce as we know it,” said Remy Glaisner, research director for intelligent operational systems and robotics, IDC. “From improving worker strength, efficiency, and safety to reducing occupational injuries caused by repetitive heavy lifting, the Guardian XO is poised to be a game-changer for a wide variety of industries.”

Sarcos announced in January that it is partnering with Delta Air Lines to determine potential operational uses for the Guardian XO. Delta first started working with Sarcos in 2018 as part of its X-TAG, representing the aviation sector. In November, Delta personnel representing Airport Customer Service and Cargo visited the Sarcos headquarters to see the Guardian XO in action and explore how wearable robotics could potentially benefit them in their everyday work.

Potential uses at Delta are reported to include handling freight at Delta Cargo warehouses, moving maintenance components at Delta TechOps, or lifting heavy machinery and parts for ground support equipment. Delta plans to test the technology in a pilot location during the first quarter of 2020, giving employees the opportunity to experience the technology in a real-world setting and provide additional feedback on its functionality.

“We look for companies who are clear leaders in tech adoption and have a history of innovating to meet the needs of their customers and their employees,” said Wolff. “Delta is the natural fit in the airline industry and has proven to be a great partner as we work to fine tune this technology for commercial deployment.”

Sarcos Robotics (www.sarcos.com), formerly the robotics division of a major defense contractor, is based in Salt Lake City, Utah. The company is backed by Caterpillar, GE Ventures, Microsoft and Schlumberger.

Research at Sandia Looking at How Brittle Materials Fail