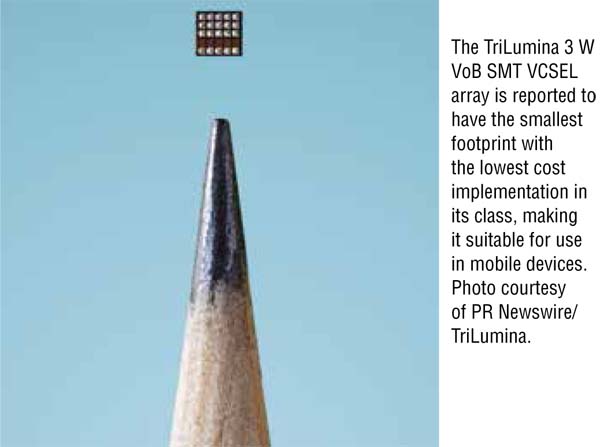 The TriLumina 3 W VoB SMT VCSEL array has the smallest footprint with the lowest cost implementation in its class, making it ideal for use in mobile devices, TriLumina said in its release.  It is also said to simplify time-of-flight (ToF) camera supply chains as compared to conventional VCSELs for 3D sensing.

“We were very pleased to launch the 4 W VoB for automotive applications this past summer,” said Brian Wong, president and chief executive officer of TriLumina (www.trilumina.com).“Now, with the new 3 W flip-chip VoB, TriLumina has created an even smaller form factor, which enables a thinner and smaller solution with improved performance as compared to conventional top-emitting VCSELs specifically targeted at mobile ToF applications.”

Conventional VCSEL arrays are mounted on a submount and use bond wires for electrical connections. The new 3 W VCSEL on-board, surface mount technology (SMT) device is a compact, surface-mountable design. It consists of a single VCSEL array die that is flip-chipped with standard surface mount technology (SMT) to a printed circuit board (PCB) without the need for a submount carrier for the VCSEL die at the same time as other SMT components on the same PCB, according to TriLumina (www.trilumina.com).

Although direct flip-chip SMT technology has been used in other components, such as radio frequency (RF) and power field-effect transistor (FET) chips, TriLumina’s VoB is reported to represent the first use of the technology on a VCSEL device. The VCSEL device uses copper pillars with solder bumps that are currently in use for other types of products. It mounts directly to a PCB using standard lead-free SMT, with the added benefit of built-in hermeticity and excellent thermal properties that are due to TriLumina’s unique back-emitting VCSEL structure, the company said.