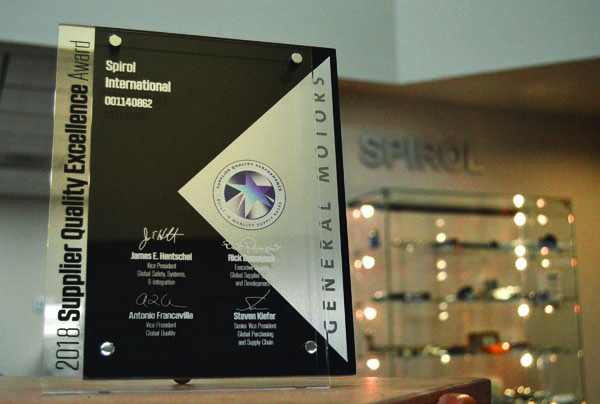 DANIELSON, Conn.—SPIROL International Corporation recently announced that two of its manufacturing locations have received the 2018 General Motors Supplier Quality Excellence Award for achieving operational excellence and quality control. It is the fifth year that SPIROL Canada has won the award, and the fourth consecutive year that SPIROL Connecticut has received the prestigious award, the company said in a press release.

Only 10 percent of General Motors’ suppliers received the award for 2018, according to SPIROL, which said that it has supplied “millions or parts” to General Motors from its  global locations. In a letter notifying SPIROL of the awards, General Motors stated, “The award is given to specific manufacturing locations and only our top performing supplier manufacturing sites are eligible to receive it.”

“Suppliers who receive this award have met or exceeded a very stringent set of quality performance criteria and have achieved the cross-functional support of the entire GM organization,” according to the letter sent by GM. “This was even a bigger challenge as GM continues to launch many new and exciting products.”

SPIROL (https://www.spirol.com) manufactures a diverse line of engineered components for fastening and joining. The company has facilities on four continents (North and South America, Europe, and Asia), and has been providing major manufacturers with technical expertise in fastening, joining, and assembly since 1948, SPIROL said.

For Maker of Tags and Labels, Sustainability Is Key to Operations