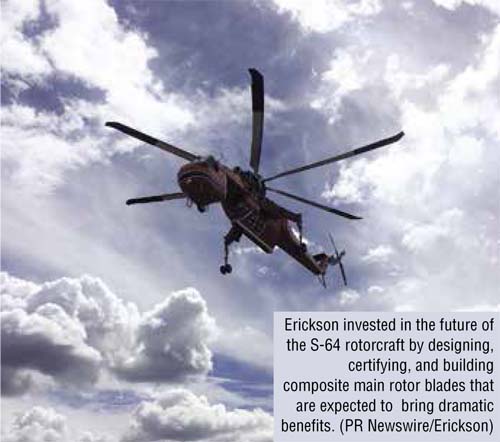 After many years of manufacturing metal blades, Erickson invested in the future of the S-64 rotorcraft by designing, certifying, and building composite main rotor blades that are expected to  bring dramatic benefits. Erickson began the process of designing the new blades in 2008, working closely with the FAA and various industry partners.

In 2013. Erickson collaborated with Helicopter Transport Services (HTS), so the blades could be utilized on CH-54 rotorcraft as well. To maintain close control of blade manufacture, Erickson built a composite manufacturing facility from scratch in 2015.

After thousands of hours of design, testing, and analysis by Erickson’s engineers and partners, the new composite main rotor blades are now approved by the FAA for the S-64E with an initial life that will increase as fatigue testing continues. Certification for the CH-54A is expected to follow quickly in the coming weeks, and certification for the S-64F and CH-54B is expected this summer, the release said.

“The CMRB program shows our commitment to innovation and next-generation programs for the modernization of the S-64 Air Crane® helicopter and legacy fleet,” said Erickson CEO Doug Kitani, in the release. “As an OEM provider and air operator, Erickson continues to push the envelope to find new and reliable solutions to keep our customers flying longer, safer, and always for the best price.”

Erickson (https://ericksoninc.com/) is a global provider of aviation services that specializes in defense and national security, manufacturing, maintenance repair and overhaul (MRO), and civil services. Erickson’s manufacturing and MRO services include manufacturing the S-64 Air Crane helicopter as the original equipment manufacturer (OEM), as well as manufacturing key aerospace parts for aerospace OEMs.

Getting More Heat Out of Sunlight