A New Process Designed for a New Part 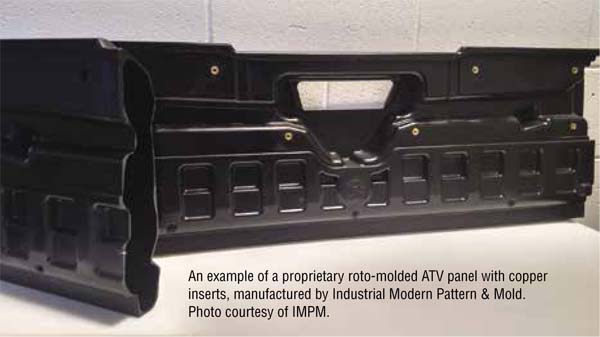 Industrial Modern Pattern & Mold (IMPM), founded in 1971, works so closely with its customers, in some cases, a customer wants a new part manufactured that encourages IMPM to create its own manufacturing process.

Industrial Modern Pattern & Mold, in Elk Grove, Illinois, employs about 18 people working at its 12,000-square-foot manufacturing facility. It serves numerous industries, including automotive, sports equipment, and medical, all at about 20 percent each of the company’s business. It creates parts for point-of-purchase displays, and it works with OEMs on new product development.

In one case, Industrial Modern Pattern & Mold designed its own rotational molding (roto-molding) machine that would rotate a mold 720 degrees to ensure the slow-curing urethane inside filled the entire cavity of the silicone mold. To grasp 720 degrees of rotation, think about a rotisserie grill. The metal rod inside the grill spins 360 degrees during cooking. Now spin the entire grill so the rod rotates end over end. That’s 720 degrees.

An ATV company wanted doors and tailgates that were hollow, which are typically roto-molded parts. Via a traditional prototype molding process, which uses silicone and urethane, the parts were molded in two halves and then glued together. Industrial Modern Pattern & Mold’s engineers determined that there must be a better way to produce a part that would mimic production methods.

“The requirement was to produce a hollow part which would be similar to the production process of roto-molding. Prototyping this part in the past was completed by creating two halves and gluing them together,” said Brad Schneider, vice president of business development with Industrial Modern Pattern & Mold. “The gluing process of parts had high field test failures and was not a true representation of our production. Designing and building the machine allowed us to simulate the process (roto-molding.)”

So Industrial Modern Pattern & Mold engineers designed a proprietary roto-molding machine that made the part whole, not as two halves.

Schneider said the company’s machine allows it to help OEMs early in the design process for roto-molded parts by providing accurate economical prototypes fast. It allows an OEM to prove the concept, to confirm form, fit, and function for a reasonable cost. The company’s proprietary roto-molding machine produces less costly parts by using silicone molds and one of approximately 140 urethanes.

“Our silicone mold is in the neighborhood of $7,000 and allows the OEM to make a roto-molded part,” Schneider said. “If the OEM went straight to a production tool, the cost would be close to $100,000. It’s a huge magnitude of cost difference between the two. If you’re not sure of the design and function, do you really want to spend $100,000 on it? Wouldn’t you rather fine-tune it with a small investment of $7,000 to make sure it’s right?”