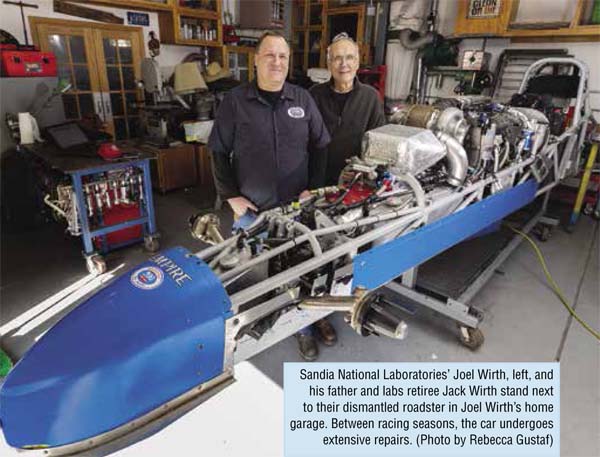 ALBUQUERQUE, N.M. — Sandia National Laboratories manager Joel Wirth, a mechanical engineer by training, studied a problem with his car. The weight was too far back, making the car fishtail whenever he drove it faster than 200 mph.

For the past eight years, he’s been working afterhours in his home garage with his crew chief — his father, Jack Wirth, a retired electrical engineer from Sandia. Together, they’ve built one of the fastest 1927 Model T roadsters in the world.

Building the car is more than a pastime. It’s practice. Joel Wirth works on the car to immerse himself in the kinds of challenges his team deals with every day designing national security technologies. Jack Wirth, 83, and a former manager himself, uses the car to whet his skills and stay active.

The way they work together is modeled after work at Sandia. Racing the car is treated like an experiment: They collect data, analyze it for problems, and then go make improvements during the off season.

They’ve been fine-tuning their vehicle this way for years. When the car needed more traction, they mounted a wing behind the cockpit to push down on the rear wheels. When they noticed the car fishtailing at high speeds, they built a vertical fin to keep it straight.

Then, at the end of each summer, Joel Wirth straps himself into the car — which moves faster than a small airplane — and gets ready for the next experiment.

In August 2018, Joel Wirth pushed his car up to the starting line at the Bonneville Salt Flats, an ancient lakebed-turned-speedway in Utah, with his eyes set on breaking the speed record for his car class during Bonneville’s annual Speed Week events.

Despite being classified as a vintage car, everything about the Wirths’ car is modern and most of it handmade, including the fuel-injected, turbo-charged engine, two onboard computers (one to control the engine and one to log data) and the long, narrow, royal blue body that sits low to the ground.

“I fell in love with land-speed racing at Bonneville because, for me personally, it was all about beating a standard — the clock — through the best design I could create,” Joel Wirth said.

The desert can easily exceed 100 degrees, and Wirth was wearing a 50-pound fire suit for safety. To stay cool, he had modified the engine’s cooling system to run through his suit, refrigerating his long johns. 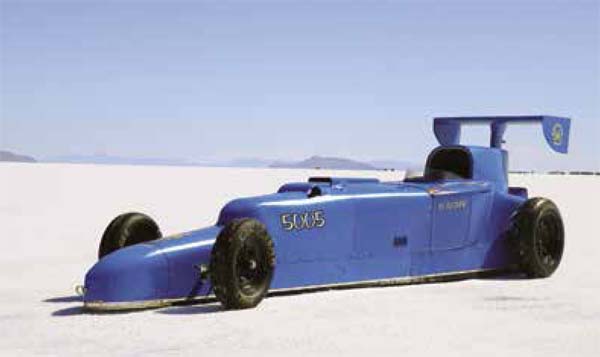 The Wirths’ fully assembled racecar sits parked at the Bonneville Salt Flats racetrack in Utah, where they compete each year to set land-speed records in their vintage car class. (Photo courtesy of Joel Wirth)

An official waved him forward, and Wirth rolled his foot onto the gas.

“You’re just part of the equipment at that point,” he said.

It took him about 60 seconds to reach top speed. At 100 mph, Wirth shifted out of first gear.

At 220 mph, fifth gear, he was still building momentum as mile markers flashed by. Wirth’s car has an open cockpit, so during time trials, the wind knocks his helmet around. “But if the car is designed and built right, things go well,” he said. “Otherwise, driving is a handful.”

After five miles, Wirth reached the end of the course and deployed a parachute to slow down. His father drove over to pick him up and analyze the run.

A splash of water on the side of the car caught their eyes. The engine was leaking coolant. Not knowing the cause, they weighed the risks of taking the car out for a second run. If the cooling system over pressurized, it could explode and douse Wirth with boiling hot water. Hence the fire suit.

Engineering an Emotional Draw to Racing

The first day father and son ever watched races together at the salt flats, nine years ago, it wasn’t the speed that grabbed their interest. They ended up talking all that day about aerodynamics, thermodynamics, downforce, weight and balance. They philosophized about engine design, debated about tire management, and at the end of the meet, Joel Wirth turned to his father and said, “I think I want to do this.”

“I understand why,” Jack Wirth said.

It initially took them 1 ½ years, working almost daily, to dismantle a derelict racecar and rebuild it into working condition. Now, they focus on fixing relatively minor flaws, including the faulty gasket that spoiled their 2018 run.

“We keep working to improve. That’s the bottom line,” Joel Wirth said, adding that the engineering challenges of their hobby are an emotional draw.

When he discovered that a diagnostic sensor was negatively affecting the car’s performance, he had to teach himself chemistry to understand the reaction inside it that was causing the problem. When he’s pressed for time or money, he makes critical decisions about which problems to fix and which to leave for another day.

These experiences, Wirth said, help him reflect on the human factors of engineering — not just the mechanical ones — and empathize with his Sandia team facing similar challenges.

Jack Wirth has grown poignantly aware of logistics and the need to keep operations simple. He isn’t just his son’s crew chief — at times, he’s the entire crew. Transporting the car and all the equipment they need for a race takes careful planning, and sometimes it means enlisting help from friendly, supportive members of their racing community.

The Wirths returned to Bonneville in September 2019 for World of Speed, one year after coming up just shy of the record. This time, the car worked perfectly. As his howling engine turned heads across the flats, Joel Wirth knew before he had even finished the race that he had qualified for a new record.

His speed: 274 mph, smashing the previous record by 17 mph, which was a startling jump in a community that normally sees records set by smaller margins, especially when they’re set by people working out of a home garage. Officials checked the car for compliance, and the next day the Wirths made a second run. Even faster: 278. The record observed by the Southern California Timing Association is the average of both runs, 276.7 mph.

To Joel Wirth, the more significant accomplishment is what he and his father made together.

“It’s a great opportunity to build a special relationship with your dad.”