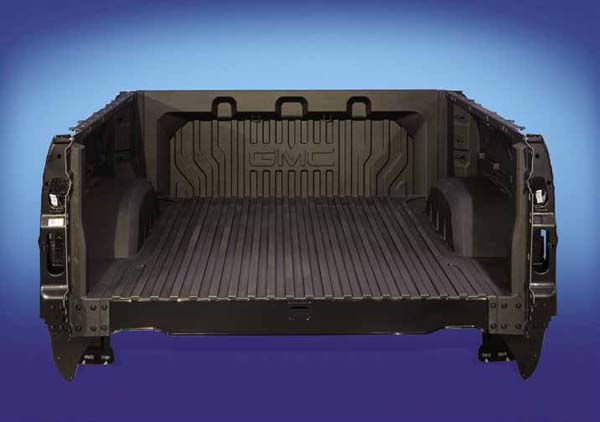 The GMC Denali CarbonPro pick-up truck box outshines the competition in matte black by being more durable, dent-resistant, and lighter. It is the first production quantity carbon fiber pick-up truck box on the market. Photo courtesy of the SPE Automotive Division.

The rugged box could signal a shift to high-volume manufacturing of carbon fiber-composite structural parts by the automotive industry.

A carbon fiber pickup box co-developed over nine years by General Motors, Michigan-based Continental Structural Plastics (CSP), and its parent company, Teijin Limited of Japan, is winning awards for being “best-in-class” tough for its dent, scratch, and corrosion resistance, as well as shaving 100 pounds off the weight of a truck bed and liner. The pickup box, or truck bed, is the industry’s first commercial application of its kind for Sereebo™, a recyclable composite material. General Motors launched the product on its 2019 GMC Sierra Denali CarbonPro® edition.

The Sereebo pickup box, called CarbonPro®, doesn’t require a bed liner, which saves money. It’s lighter than a steel or aluminum bed, which also lowers costs. But what makes CarbonPro an award-winning product is its premium durability, as well as dent, scratch, and corrosion resistance. Ruggedness, after all, is a trait that appeals to truck owners. The Society of Plastics Engineers (SPE) Automotive Division chose the product for its 2019 Innovation Award in the Body Exterior Category, as well as for its overall Grand Award, signifying the top product in the competition.

“This is industry’s first pickup box in thermoplastic composite and carbon composite,” the SPE Automotive Division said in a release. “It saved 62 lb/28 kg, [and] provided best-in-class impact resistance/durability. The unpainted UV-stable material eliminated the need for a bedliner (saving another 40lb/18 kg), and numerous customer features were molded-in, including functional compartment dividers and motorcycle tire pockets.”

The SPE Automotive Division highlighted several features of the CarbonPro pickup box, including increased cargo capacity resulting from the ability to achieve a deeper draw during molding.

“Significant technical challenges were overcome due to use of novel materials, processes, coatings, and joining methods,” SPE said in the release. “The box is fully recyclable and some scrap is reused on the vehicle.”

The pickup box also won the CAMX Unsurpassed Innovation Award, presented at the Composites and Advanced Materials Expo (CAMX) last fall.  CAMX is an annual conference produced by the American Composites Manufacturers Association (ACMA) and the Society for Advancement of Material and Process Engineering (SAMPE). Its Unsurpassed Innovation Award recognizes “a product with a design that incorporates low-cost materials for high-volume applications that can change the outlook of a particular market.”

The technology is said to mark a paradigm shift in automotive carbon fiber composite applications by enabling high-volume manufacturing of structural parts at a low cost, with minimal material waste.

“The technology marks a paradigm shift in automotive carbon fiber composite applications by enabling high-volume manufacturing of structural parts at a low cost, with minimal material waste,” CAMX said in a release.

The CarbonPro box is also a finalist in the 2020 Automotive News PACE awards.

General Motors reported the validation tests for the pickup box included dropping 450-pound water-filled steel barrels onto the bed, and subjecting it to extreme temperatures in Yuma, Arizona, and in Kapuskasing, Ontario, Canada. In another test, a 250-pound driver accelerated a snowmobile—with metal-studded track—off the back of the truck, leaving only minor scratches. Testers also pointed a high-heat generator at the bed while it was running, causing heat and vibration without damage.

In one test, a 250-pound driver accelerated a snowmobile—with metal-studded track—off the back of the truck, leaving only minor scratches. Testers also pointed a high-heat generator at the bed while it was running, causing heat and vibration without damage.

“Lower mass is helpful, but it isn’t always the main driver. Toughness is something the consumer can see and is willing to pay for,” said Eric Haiss, executive vice president and mechanical engineer with Continental Structural Plastics. Haiss worked for 10 years helping to develop the Sereebo™ material used in the truck bed, while working first with Teijin Limited, and then with CSP and GM.

“Teijin had been developing Sereebo for ourselves, molding parts, designing with it. In about 2010, we started to approach OEMs for potential applications and design projects,” said Haiss, who joined Teijin in 2009. The relationship with General Motors took a year to mature as both companies came to know each other. That led to a co-development agreement between Teijin and GM in 2011. The two companies brought about 30 engineers together in the same facility to speed the development.

In 2015, CSP joined the team because of its long history with GM and its ability to “commercialize and productionize the process.” In 2017, Teijin purchased CSP.

The team worked in a new facility in Auburn Hills, Michigan, focused on Sereebo for GM products, particularly the pickup truck bed. Numerous challenges arose, not the least among them the cost of manufacturing carbon fiber in sufficient quantities for one of the most popular classes of vehicles, a pickup truck.

“We hosted GM engineers full time, and they had their own desks and offices,” Haiss said, referring to the Auburn Hills facility. Workers included seven or eight Japanese engineers from Teijin working in Michigan, plus another 80 to 100 Teijin engineers working in Japan.

Carbon fiber is a thin filament—much smaller than a human hair—made of carbon atoms. By itself, it isn’t useful. However, it is stronger than steel when it is first woven into yarn. The  yarn is then woven into cloth, a resin is added to the cloth, and the cloth is shaped into a part. The process is costly, complicated, and constantly evolving.

Although carbon fibers were around since the late 1880s, in part for tryouts in light bulbs, they were costly and difficult to work with. Much more development work was required before they could be used successfully. It wasn’t until the 1960s and ’70s that people understood them better.

The manufacturing technologies that Continental Structural Plastics uses to mold Sereebo into the CarbonPro box are “the first mass production technologies developed for carbon fiber-reinforced thermoplastics suitable for high-volume programs,” the company said in a release.

The manufacturing technologies that Continental Structural Plastics uses to mold Sereebo into the CarbonPro box are “the first mass production technologies developed for carbon fiber-reinforced thermoplastics suitable for high-volume programs,” the company said in a release. Instead of using long lengths of carbon fiber to make Sereebo, CSP makes Sereebo from carbon fiber that is chopped into one-inch pieces. The short pieces make Sereebo easier to shape into complex configurations.

Sereebo is a carbon fiber-reinforced, thermoplastic composite material. Its thermoplastic component is nylon, chosen after research by CSP into five or six other options. Unlike thermoset materials, which stand up to high temperatures but cannot be melted after curing, Sereebo is recyclable.

The carbon fiber manufacturing process involves much labor and a lot of scrap. A factory line to produce carbon fiber can cost a hundred million dollars, and, typically, OEMs don’t want to guarantee they will buy products from a proposed factory. On the other hand, a factory owner may not want to invest in a line without a guaranteed customer. That is one reason why carbon fiber hasn’t exploded in popularity. At $100 million per production line, it’s a hurdle.

“Fiber is expensive,” Haiss said. He explained that in the aerospace industry, companies measure what they call a buy-to-fly ratio, which compares the weight of the raw material purchased to make a part, to the weight of the finished part that actually “flies,” or is used on the aircraft. At one time, a buy-to-fly ratio of 2-to-1 was considered acceptable, meaning that 50 percent of the material was wasted. Today, companies work hard to reduce that ratio to 1.5-to-1.

Recycling Is a Must

Carbon fiber has a high buy-to-fly ratio, and companies like CSP are working to reduce it by recycling the dross from the metal, for example. Often, major manufacturers hire recycling firms to recycle their carbon fiber for them.

“Sereebo is world-class at 60 seconds,” Haiss said, adding that costs are falling as CSP continues to manufacture the CarbonPro box. “The costs are always a factor, and new technologies have cost challenges up front. The costs are coming down as it starts to sell, and will continue to improve.”

Haiss said the team is researching other uses for Sereebo, such as to absorb energy in crash zones. He said one possibility is in the rocker panel of a car.

The rocker panel is typically a piece of steel that extends along the body under the doors, from the front wheel to the back wheel. Its high strength keeps the frame from sagging in the middle. By creating a safe cabin that does not deform in a crash, it protects the passengers.

Haiss summed up why, despite the manufacturing challenges, the CarbonPro composite pickup box has a place on today’s pickup trucks.

“It offers design flexibility and toughness. People are dropping tool boxes, loads, and rocks in there [on the truck]. It’s a premium product, so it’s  a little more expensive to make,” Haiss said. It’s also lighter, stronger, and more durable. “We can put different grains on it. We can put different geometries on it. There is a lot more flexibility in what they can design into the part.”

If This Trike Manufacturer Has a Middle Name, It’s Custom