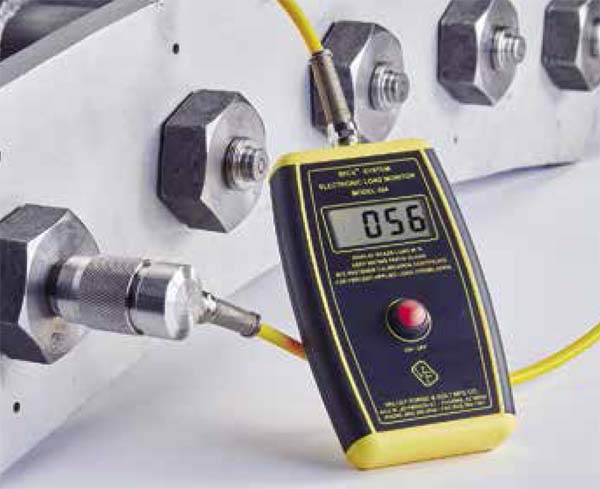 The SPC4 Load Indicating System enables users to consistently monitor the clamp load of any SPC4 bolted joint. By attaching a probe to the datum disc on the end of the fastener, users can read the value on a handheld battery powered digital monitor. Image courtesy of Valley Forge & Bolt Manufacturing Co.

PHOENIX—Knowing the tension of critical joints is a matter of safety, peak performance, and maximum uptime. But a new technology from Valley Forge & Bolt Manufacturing Company could be shifting the paradigm. The company’s new SPC4™ Load-Indicating Technology makes it possible to measure the actual tension in a fastener, not just the pre-load that is being applied by torque or tension tools. By using SPC4 and any one of its specially designed interchangeable readers, technicians can quickly and easily gauge tension and even have the option of remotely monitoring fastener tension within SPC4 bolted joints, the company said in a release.

The SPC4 is a proprietary technology from Valley Forge that is ASTM F2482 compliant and is reported to accurately measure direct tension in the fastener within +/- 5 perecnt. It provides absolute, real-time knowledge of fastener tension and performance, from installation through fastener life, the release said.

The technology measures the stretch of the bolt (in other words, the bolt tension), directly from the fastener. Because stretch is the force that creates clamp load, this capability makes SPC4 “the most accurate method available to monitor the clamp load of critical joints,” the report said.

With SPC4, virtually any technician can use any type of tightening tool—hydraulic, pneumatic, electric, or a hand wrench—and still achieve even and optimal load on a bolted joint. The technology  can measure preload in the fastener at installation, monitor load while in service, or measure load and load loss during maintenance inspections. The result is optimal joint integrity, less downtime, and safe performance of equipment, the release said.

Valley Forge engineers and manufactures a variety of SPC4 readers in analog and electronic formats. Technicians simply quick-connect the reader to a datum disc on the end of the SPC4 fastener, and the tension is displayed in real time on the reader as a percentage of minimal yield strength. Any reader can be used with any SPC4 fastener.

The SPC4 technology is available in standard bolts, studs, custom designs, and retrofits for customer-supplied fasteners. Each is modified with Valley Forge’s datum disc and gauge pin, compatible with any Valley Forge-supplied reader.