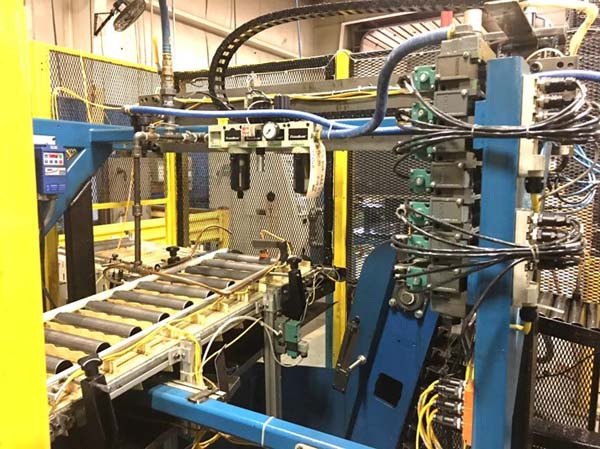 CLEVELAND—Three manufacturing firms and a state college were named winners of the Precision Metalforming Association’s (PMA) 2019 Awards of Excellence in Metalforming, presented by the PMA in November. The annual awards recognize the high standards of achievement set by metalforming industry organizations in the areas of design, quality, training and education, process control, product development, and productivity. All of the winners have dedicated themselves to continuous improvement of their products and services, PMA said in a release.

The winners were honored with a special plaque, commemorative flag, and a cash prize during the FABTECH tradeshow in Chicago.  Following are summaries of each of the award winners:

Improving the crash tube line was challenging due to tight part tolerances and high throughput expectations. Also challenging was the complexity of the line, which includes a forming machine with five stations, a pierce machine with nine stations, two CNCs, a deburring operation, a parts washer, a stencil unit, and a restrike press.

Investigation of a galling issue in the forming machine revealed that oil sprayers were getting bumped out of position and not spraying on the location of the tube required for effective lubrication. This was corrected by hard-lining the lube system. Anchor also worked with the lube supplier to perform analyses on the lube at different frequencies after a tank recharge. This helped determine when the system needed to be recharged and led to the addition of an appropriate preventive maintenance schedule.

Also, parts were falling and jamming at the conveyors between the form and pierce machines, causing downtime and scrap. To fix this, Anchor engineered, built, and implemented a pick-and-place system to move parts from one machine to the other. In addition, tubes exhibited slots out of location along the length of the tube, as well as missing holes. Anchor corrected these issues through the implementation of LVDT sensors and in-line cameras.

Lastly, the two CNCs and the deburring operation required a total of three associates—one operator for each. In reviewing this, Anchor determined that too much time was spent on non-value-added activities, and the CNC machine cycle time needed to be decreased. Anchor then worked with a company to fully automate the CNC operations using a gantry pick-and-place system and two robots.

Anchor achieved numerous benefits as a result of the productivity improvements, including increased customer satisfaction due to better on-time delivery and quality, and an annual savings of more than $567,000 from scrap reduction and increased efficiency. Anchor’s average scrap rate between the three parts was reduced from 3.9 to 1.35 percent. Additionally, the company went from running 181 parts per hour with five associates to running 240 parts per hour with two associates.

The Productivity Award, one of seven Awards of Excellence in Metalforming presented by PMA, is sponsored by Zierick Manufacturing Corp. (www.zierick.com), Mount Kisco, New York.

HK Metalcraft (HKM), of Lodi, New Jersey, received the 2019 Pridgeon & Clay Excellence in Quality Award, which recognizes outstanding achievement by a manufacturing company in the development and implementation of a company-wide quality system that effectively uses continuous improvement. Established in 1926, HKM is a fourth-generation, precision metal stamping company that serves the automotive, aerospace, military, appliance, and electrical markets, among others. 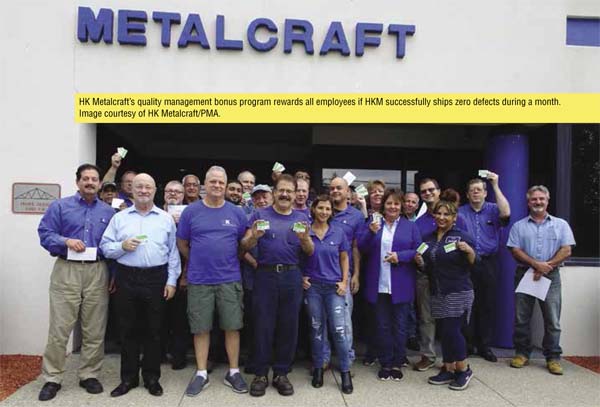 HK Metalcraft is celebrating the 15th anniversary of its quality management bonus program. This company-wide bonus system rewards all employees if HKM successfully ships zero defects (customer returns) during a month. If successful during month one, employees receive a $25 bonus. After two months in a row, employees receive $50. The pattern repeats in subsequent months, with $450 as the total bonus per employee for a perfect year. If a month is missed, the program starts over at $25.

Originated in 2004 due to HKM’s inability to ship each month without a customer return, the program is designed to make all employees concerned about quality. After implementation, the program took some time for all employees to get on board, but eventually, positive results were experienced as HKM began shipping more months without quality returns.

Management commitment is a key component of the program. Former HKM President Raymond Hopp approved the plan in 2004 and promoted it to employees at its inception. The current HKM President, Josh Hopp, continues to promote the award during the firm’s monthly all-employee town hall meetings.

The company decided to implement the bonus program to catch defects as early as possible and ultimately prevent the shipment of rejects to customers. The bonus is an integral part of HKM’s IATF audit and has received praise from TUV auditors, HKM said.

The successful program has resulted in HKM’s receiving numerous customer quality awards. As of September 2019, the company had shipped without a customer return since January 2019. 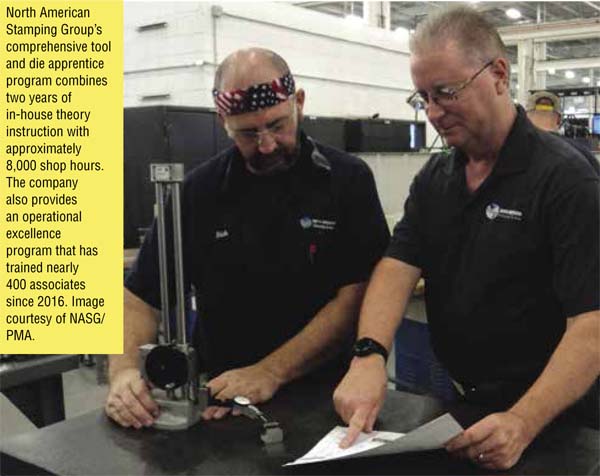 Founded in 1976, NASG is a Tier Two supplier of components, systems, and aftermarket products for the automotive industry. The company won the award for its outstanding tool and die apprenticeship program and operational excellence training.

By partnering with the U.S. Department of Labor and the National Institute for Metalworking Skills (NIMS), NASG developed a comprehensive tool and die apprentice program that combines two years of in-house theory instruction with approximately 8,000 shop hours. At every step of the program, the student must prove competency before advancing.

As apprentices build time in the shop and complete required NIMS projects, their pay increases toward the journey worker rate. The curriculum includes a step-by-step progression through Level 1 and Level 2 NIMS projects to a study of practical tool and die construction and maintenance. The program also includes shop math, blueprint reading, and drafting.

North American Stamping Group is training 14 apprentices in three groups, due to different experience levels and start dates. Ten hours of training is conducted one day per week for each group. Classroom hours are not paid and, therefore, represent the student’s commitment to the program. Apprentices work a minimum of 40 paid hours each week under the guidance of two full-time apprentice team leaders, and as they progress, they are paired with journey workers.

The company also provides an outstanding operational excellence program. All leaders, from shop-floor supervisors to the president and CEO, are required to undergo a one-week Total Quality Production System for Leadership workshop. The curriculum was developed in partnership with Toyota, Harvard School of Business, and key Tier One Toyota suppliers. Since the program’s inception in 2016, nearly 400 associates have been trained, and $6.06 million in tangible cost savings were attained in 2018. The company is on track to exceed these savings in 2019.

The Training and Education Award is sponsored by HPL Stampings, Inc., of Lake Zurich, Illinois, in memory of A.R. (Ray) Hedberg, a leader in employee training. 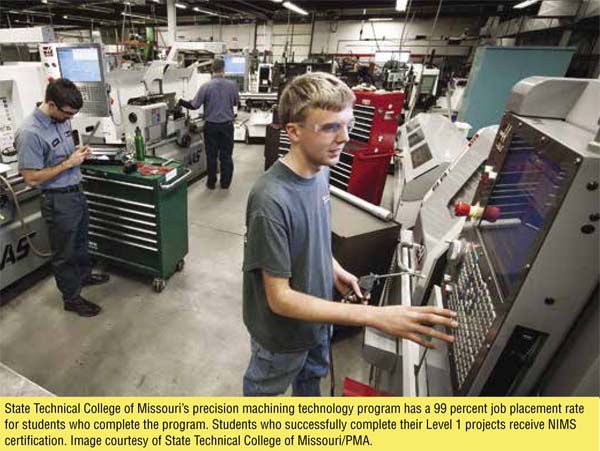 State Tech offers a two-year associate degree in precision machining technology and currently has more than 80 students enrolled in the program. Its program is dedicated to providing students with specialized knowledge in traditional and emerging technical areas, as well as general knowledge that fosters a life of learning.

State Tech also has a 99-percent job-placement rate for students who complete the program: Graduates work for companies across the state of Missouri and throughout the Midwest.

The Educational Institution Award includes a cash prize. It is sponsored by Clips & Clamps Industries, of Plymouth, Michigan, and is funded by the Dul Foundation.

The Precision Metalforming Association (www.pma.org) represents the metalforming industry of North America—a $137 billion industry that creates precision metal products using stamping, fabricating, spinning, slide forming, and roll forming technologies, as well as other value-added processes. Its nearly 800 member companies also include suppliers of equipment, materials, and services to the industry. More information on PMA’s Awards of Excellence in Metalforming is available at www.pma.org/awards.

Multi-functional microbots are here. So is a 3D printing technique that creates ‘piece of mind.’

8 Important Characteristics of Business Leaders: How 5 of the Greatest Exemplify Them