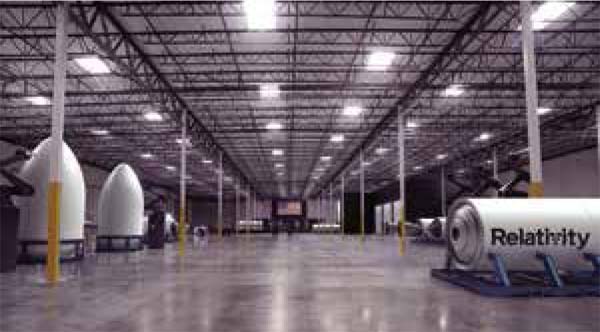 LOS ANGELES—Relativity Space, reported to be the first company to use additive manufacturing and robotics to build an entire launch vehicle, has secured a new headquarters in Long Beach, California, the company said in a release. Located at 3500 E. Burnett, Long Beach, the 120,000-square-foot space will house the company’s business operations and an unprecedented manufacturing facility that will produce Terran 1, the world’s first 3D printed rocket.

“Relativity is disrupting nearly 60 years of prior aerospace technology by building a new manufacturing platform using robotics, 3D printing, and AI,” said Tim Ellis, CEO and co-founder of Relativity Space, in the release. “With no fixed tooling, Relativity has enabled a massive part count and risk reduction, increased iteration speed, and created an entirely new value chain. I’m confident our autonomous factory will become the future technology stack for the entire aerospace industry.”

Relativity is moving staff to its new headquarters and transitioning its patented additive manufacturing infrastructure as it builds out what will reportedly be the first autonomous rocket factory. The factory will house all production for Terran 1, the Aeon engine assembly, as well as integrated software, avionics, and materials development labs.

The new facility enables production of the entire Terran 1 rocket, including an enlarged fairing, now accommodating double the payload volume. The combination of agile manufacturing and payload capacity makes Relativity the most competitive launch provider in its class, meeting the growing demands of the expanding satellite market, Relativity Space said in the release.

“The space economy continues its growth in Long Beach with the addition of Relativity,” said Long Beach Mayor Robert Garcia, Ph.D. “3D printing is groundbreaking for new jobs and new technologies in the space sector.”

“Long Beach has an extensive history as a leader in aerospace and aviation, and now we are at the forefront of the space economy,” said California Senator Lena Gonzalez. “We are excited to welcome Relativity to our ever-growing community of innovative tech companies.”

Relativity recently closed a $140 million funding round, led by Bond and Tribe Capital, and has secured a launch site right of entry at Cape Canaveral Launch Complex-16. The company has also secured an exclusive-use Commercial Space Launch Act (CSLA) agreement for NASA test sites, including E4 at the NASA Stennis Space Center, and a 20-year exclusive use lease for a 220,000-square-foot factory, also at the NASA Stennis Space Center. The Long Beach facility was constructed and is managed by Pacific Industrial.

“I am proud to welcome Relativity to our community and wish them success as they go higher, further and faster to the stars,” said 70th District Assembly member Patrick O’Donnell. “The aerospace industry is undergoing an economic resurgence in Long Beach, providing the prospects of good paying jobs and further opening up the bounds of space for research.”