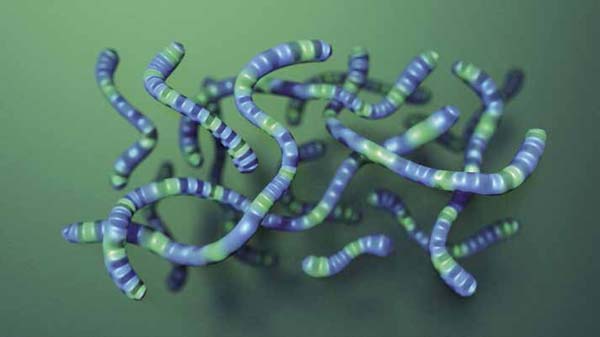 One way to visualize strands of PCDTPT, the conductive plastic material researchers studied in this work, is as a collection of gummy worms. Image
courtesy of Sean Kelley/NIST.

Have you heard of foldable smartphones? How about the flexible television screen that rolls up into a box? Or the ultrathin “wallpaper” TVs that are just millimeters thick?

A future with foldable, bendable, flexible, and ultrathin electronics is fast becoming our present. The materials responsible for these consumer goods are typically polymers — plastics — that conduct electricity. To better understand this promising class of substances, scientists at the National Institute of Standards and Technology (NIST) developed a technique that uses light to quickly and accurately test materials’ conductivity — and potentially reveal behavior that other methods could not. Now, the NIST team has demonstrated the further usefulness of this light-based method by using it to uncover behavior in one polymer that no one had seen before.

The scientists reported their results [on March 6, 2020] in The Journal of Physical Chemistry C.

The work is NIST’s latest contribution to the quest to develop measurement tools to study novel materials for use in all different kinds of electronic transmission, from bendable biosensors to mobile phones and solar cells.

“There is a growing market for flexible displays and smartphones, and keeping things smaller, more flexible, and easier to mass produce,” said Tim Magnanelli, NIST research chemist and National Research Council postdoctoral fellow. “Streamlining the conductivity testing process could be very valuable to industry researchers who just want to know, ‘Are we going in the right direction with a particular modification? Does this make the material better?’”

Most consumer appliances, such as laptops and even the computers in washing machines, are based on silicon technology. Silicon is an excellent material for controlling the conduction of electricity because of the ease with which “charge carriers” are able to move within a silicon crystal. Negative carriers are electrons; positive carriers are referred to as “holes” and are places where an electron is missing.

Built Like a Gummy Worm: Each strand of PCDTPT is made of two parts that alternate like the colors on a gummy worm candy. One part (blue) is an electron donor, meaning it tends to give electrons away. The other part (green) is an electron acceptor, meaning it attracts electrons. Packing many PCDTPT strands next to each other in a thin film allows electrons to move freely about the material, conducting electricity. Image courtesy of Sean Kelley/NIST.

Although plastics have been studied and widely used since the 19th century, conductive plastics are only just beginning to be used for mainstream commercial electronics. They tend to be somewhat less efficient than silicon at conducting electricity, meaning there is generally less movement of the charge carriers within the materials. However, plastics are not only flexible where silicon is rigid, they are also lighter and more customizable and are often cheaper and easier to fabricate. They can even be transparent.

The typical way to test a material’s conductivity is to solder contacts onto it. But while contacts attach well to silicon, it isn’t always possible to make a good connection to a polymer. Even with a good connection, there can still be defects in the surface of the material that alter its measured conductivity. Applying contacts to each sample also takes time, lengthening the testing process and potentially preventing manufacturers from using the sample as a device component.

To address these issues, a few years ago NIST research chemist Ted Heilweil designed a rapid, noncontact way to measure directional conductivity that relies on two kinds of light. First, he uses ultrashort pulses of visible light to create electrons and holes within a sample. Then, he illuminates the sample with polarized terahertz (THz) radiation, which has a wavelength much longer than the human eye can see, in the far infrared-to-microwave range.

Unlike visible light, THz light can penetrate even opaque materials, such as relatively thick polymer samples and solid semiconductors. How much of that light penetrates the sample depends on how many charge carriers are freely moving, indicating its conductivity. This new method also reveals whether charges move more easily through the material in a particular direction.

In the latest study, Heilweil and Magnanelli used their THz method for the first time on two conductive polymers, chosen because they are straightforward polymers to study and compare. The first, called PCDTPT, is relatively new. A chain of it consists of two different molecules connected end-to-end and alternating like the colors on a gummy worm. One molecule in the chain is a “donor,” which absorbs light and produces charge carriers. The other molecule is an “acceptor,” which attracts charge carriers, inducing them to move along the chain and around the sample. 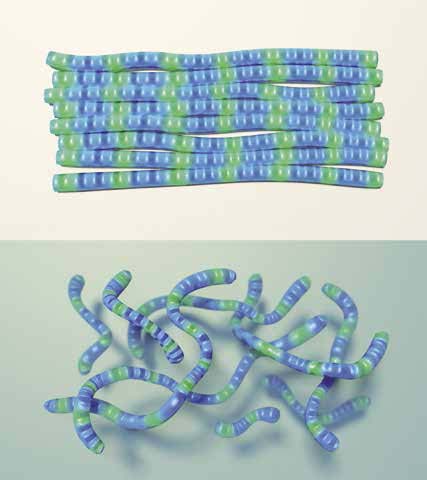 Solid vs. Liquid: Using gummy worms as a stand-in for the PCDTPT strands, these images depict the PCDTPT material in two forms: as a solid (top) and suspended in a liquid (bottom). In solid form, the gummy worms are touching, and electricity can flow from one worm to another. When suspended in a liquid, though, each gummy worm is more isolated, and electricity cannot flow as easily between worms. In the NIST experiment, researchers found that PCDTPT strands were just as conductive in the liquid as they were in solid form, which suggests that conductivity is happening not so much between strands/gummy worms as along a single strand/gummy worm. Image courtesy of Sean Kelley/NIST.

Heilweil and Magnanelli first tested both substances in the form of nanofilms — essentially a thin but solid sample. Their goal was to contrast the conductive properties of the PCDTPT film when examining along—versus across—the strands.

Then they suspended both molecules in a nonconducting liquid that prevented them from electronically interacting and communicating with each other. As expected from previous experiments, the P3HT solution showed no measurable conductivity.

To their surprise, however, the PCDTPT solution did show conductivity. Not only that, but it showed just as much conductivity in solution as it did in solid form.

“It was amazing,” Heilweil said. “We never saw that behavior in any other polymer before.”

Because the PCDTPT molecules were more isolated from each other in the liquid sample, the finding implies to the researchers that the conductivity in PCDTPT is happening within and along individual polymer strands (i.e., within a single gummy worm), not between polymer strands (i.e., between different gummy worms), contrary to what most scientists previously thought.

“We could not have discovered this information using the conventional, contact-based method,” Magnanelli said.

NIST physicist Lee Richter and guest researcher Sebastian Engmann, who prepared the samples, had been testing directional polymer materials the conventional way, by applying contacts. Using the terahertz method “took it a step further” by allowing researchers “not just to consider what’s going on at the surface where you put the contact, but instead to look through the entire layer,” Magnanelli said.

Moving forward, Heilweil and Magnanelli hope to explore the properties of similar commercially available polymers and others obtained by Richter. PCDTPT’s surprise conductivity when suspended in a liquid “could be the tip of the iceberg, because maybe another polymer will also have much better conductivity than expected,” Magnanelli said. “The sky’s the limit.”

Though neither PCDTPT nor P3HT themselves will likely be particularly useful for large-scale consumer electronic devices, Heilweil stresses that asking the right questions — by finding new and better ways to design, orient, and measure material properties — may show researchers that a previously uninteresting material can perform much better than anyone realized.

“The prediction may be that even though we’re still at infancy in terms of understanding how these polymers behave, we could get to a point where they’re so good that they even compete with silicon,” Heilweil said. “That’s a long shot, but very possible.”

Republished with permission of NIST.

Can Construction Spur an Economic Recovery?