Engineers have long imagined materials with properties that would enable parts to perform better in certain environments or allow products, like robots, to do things they previously couldn’t. Today, that ability to imagine materials with new properties is spurring valuable research that could, one day, make these dreams a reality.

The two reports that follow reveal findings of researchers at the Georgia Institute of Technology (Georgia Tech) and The Ohio State University that hold potential for the design of new materials and applications.

In the first, Georgia Tech Research News writer Josh Brown breaks down the work of a Georgia Tech professor whose findings could enable researchers to custom design alloys that emphasize particular properties. In the second, Brown relates how a team of researchers from Georgia Tech and Ohio State developed a material that can transform into various shapes, possibly unlocking new applications for robotics.

Atomic-level Imaging Could Offer Roadmap to Metals with New Properties 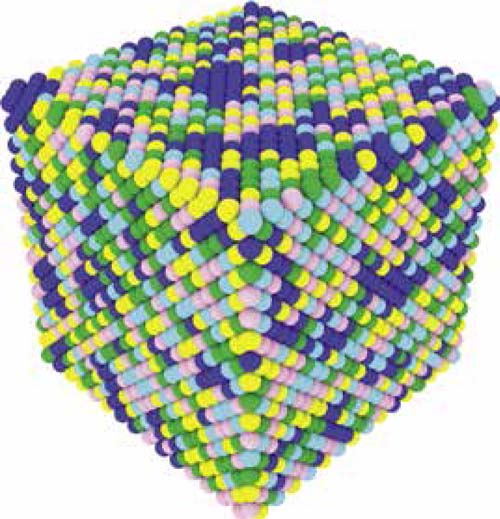 ATLANTA—High-entropy alloys, which are made from nearly equal parts of several primary metals, could hold great potential for creating materials with superior mechanical properties.

But with a practically unlimited number of possible combinations, one challenge for metallurgists is figuring out where to focus their research efforts in a vast, unexplored world of metallic mixtures. A team of researchers at the Georgia Institute of Technology has developed a new process that could help guide such efforts. Their approach involves building an atomic resolution chemical map to help gain new insights into individual high-entropy alloys and help characterize their properties.

In a study published Oct. 9, 2019 in the journal Nature, the researchers described using energy-dispersive X-ray spectroscopy to create maps of individual metals in two high-entropy alloys. This spectroscopy technique, used in conjunction with transmission electron microscopy, detects X-rays emitted from a sample during bombardment by an electron beam to characterize the elemental composition of an analyzed sample. The maps show how individual atoms arrange themselves within the alloy, allowing researchers to look for patterns that could help them design alloys emphasizing individual properties.

For example, the maps could give researchers clues to understand why substituting one metal for another could make an alloy stronger or weaker, or why one metal outperforms others in extremely cold environments.

“Most alloys used in engineering applications have only one primary metal, such as iron in steel or nickel in nickel-based super alloys, with relatively small amounts of other metals,” said Ting Zhu, a professor in the George W. Woodruff School of Mechanical Engineering at Georgia Tech. “These new alloys that have relatively high concentrations of five or more metals open up the possibility of unconventional alloys that may have unprecedented properties. But this is a new compositional space that has not been explored, and we still have a very limited understanding of this class of materials.”

The name “high entropy” refers to the lack of uniformity in the mixture of metals as well as how many different and somewhat random ways the atoms from the metals can be arranged as they are combined.

The new maps could help researchers determine whether there are any unconventional atomic structures that such alloys take that could be leveraged for engineering applications, and how much control researchers could have over the mixtures in order to “tune” them for specific traits, Zhu said. 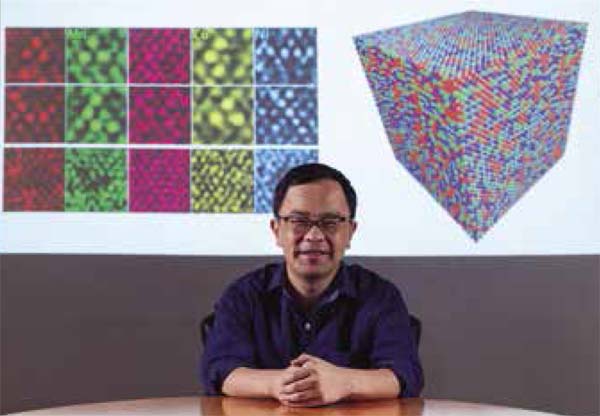 To test the new imaging approach, the research team compared two high-entropy alloys containing five metals. One was a mixture of chromium, iron, cobalt, nickel, and manganese, a combination commonly referred to as a “Cantor” alloy. The other was similar but substituted palladium for the manganese. That one substitution resulted in much different behavior in how the atoms arranged themselves in the mixture.

“In the Cantor alloy, the distribution of all five elements is consistently random,” Zhu said. “But with the new alloy containing palladium, the elements show significant aggregations due to the much different atomic size of palladium atoms, as well as their difference in electronegativity compared to the other elements.”

In the new alloy with palladium, the mapping showed that palladium tended to form large clusters, while cobalt seemed to collect in places where iron was in low concentrations.

Those aggregations, with their sizes and spacings in the range of a few nanometers, provide strong deformation resistance and could explain the differences in mechanical properties from one high-entropy alloy to another. In straining tests, the alloy with palladium showed higher yield strength while keeping similar strain hardening and tensile ductility as the Cantor alloy.

“The atomic scale modulation of element distribution produces the fluctuation of lattice resistance, which strongly tunes dislocation behaviors,” said Qian Yu, a coauthor of the paper and a professor in Zhejiang University. “Such modulation occurs at a scale that is finer than precipitation hardening and is larger than that of traditional solid solution strengthening. And it provides understanding for the intrinsic character of high-entropy alloys.”

The findings could enable researchers to custom design alloys in the future, leveraging one property or another.

“We believe that this work is really important, as local chemical ordering in these extremely high profile, high-entropy alloys is critical to dictating their properties.” said Robert Ritchie, another coauthor and a professor at the University of California, Berkeley. “Indeed, this presents a way to tailor these materials to attain optimal properties by atomic design.”

The team also included researchers from the University of Tennessee, Knoxville; Tsinghua University; and the Chinese Academy of Sciences.

This research was supported by the National Science Foundation through grant No. DMR-1810720; the Department of Energy, through contract No. DE-AC02-05CH11231; the National Natural Science Foundation of China, through grant No. B16042; and the State Key Program for Basic Research in China, under grant No. 2015CB659300. The content reflects the views of the authors and does not necessarily represent the official views of the sponsoring agencies. 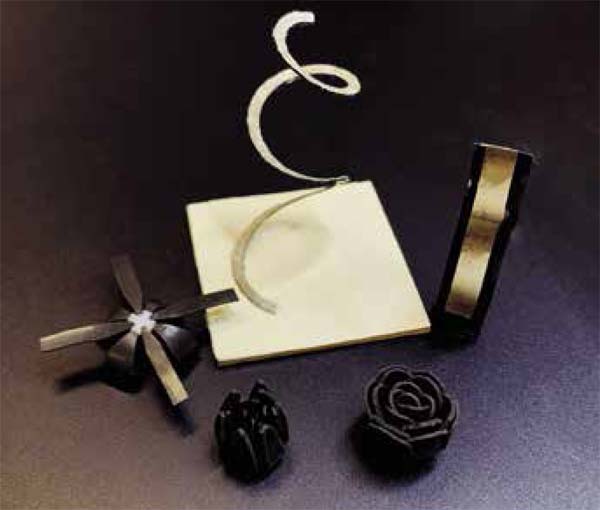 An assortment of objects made from magnetic shape-memory polymers. (Credit: Shuai Wu, The Ohio State University)

ATLANTA—A team of researchers from the Georgia Institute of Technology and The Ohio State University has developed a soft polymer material, called magnetic shape memory polymer, that uses magnetic fields to transform into a variety of shapes. The material could enable a range of new applications from antennas that change frequencies on the fly, to gripper arms for delicate or heavy objects.

The material is a mixture of three different ingredients, all with unique characteristics: two types of magnetic particles, one for inductive heat and one with strong magnetic attraction; and shape-memory polymers to help lock various shape changes into place.

“This is the first material that combines the strengths of all of these individual components into a single system capable of rapid and reprogrammable shape changes that are lockable and reversible,” said Jerry Qi, a professor in the George W. Woodruff School of Mechanical Engineering at Georgia Tech.

The research, which was reported Dec. 9 in the journal Advanced Materials, was sponsored by the National Foundation of Science, the Air Force Office of Scientific Research, and the Department of Energy.

To make the material, the researchers began by distributing particles of neodymium iron boron (NdFeB) and iron oxide into a mixture of shape memory polymers. Once the particles were fully incorporated, the researchers then molded that mixture into various objects designed to evaluate how the material performed in a series of applications. 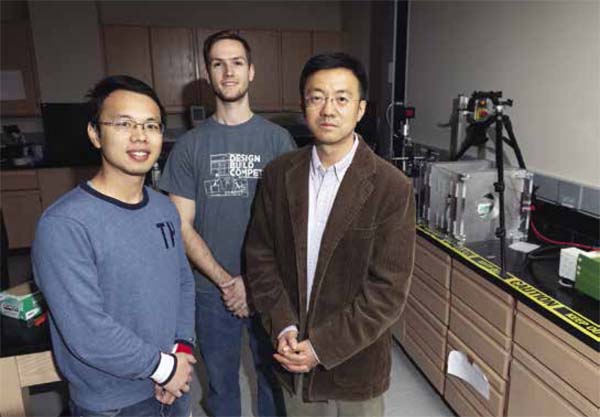 The shape-changing process takes only a few seconds from start to finish, and the strength of the material at its locked state allowed the gripper to lift objects up to 1,000 times its own weight.

“We envision this material being useful for situations where a robotic arm would need to lift a very delicate object without damaging it, such as in the food industry or for chemical or biomedical applications,” Qi said.

The new material builds on earlier research that outlined actuation mechanisms for soft robotics and active materials and evaluated the limitations in current technologies. 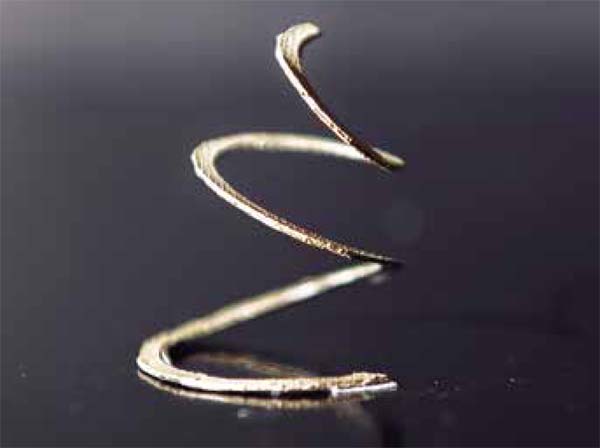 This object is made from a special material called “magnetic shape-memory polymer.” It can bend and change shape in response to a magnetic field. (Credit: Allison Carter)

The researchers also tested other applications, where coil-shaped objects made from the new material expanded and retracted—simulating how an antenna could potentially change frequencies when actuated by the magnetic fields.

“This process requires us to use of magnetic fields only during the actuation phase,” Zhao said. “So, once an object has reached its new shape, it can be locked there without constantly consuming energy.”

This research was supported by The Ohio State University Materials Research Seed Grant Program, funded by the National Science Foundation’s Center for Emergent Materials under grant No. DMR-1420451. The project was also supported by the Center for Exploration of Novel Complex Materials, the Institute for Materials Research, the Air Force Office of Scientific Research under grant No. FA9550-19-1-0151, the U.S. Department of Energy under grant No. DE-SC0001304, and by grants from the Haythornthwaite Foundation. Content is the responsibility of the authors and does not necessarily represent official views of sponsoring agencies.

Can Construction Spur an Economic Recovery?