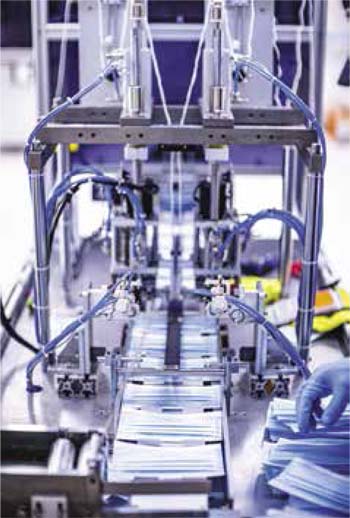 Company raises $5 million investment in bid to bring manufacturing back to the U.S.

AUSTIN, Texas—Armbrust American recently opened a Texas manufacturing facility, where it is currently producing medical face masks in an effort to combat PPE shortages and bring strategic manufacturing back to the United States. The company began producing masks at the Austin-area facility in May after closing a $5 million investment round, and is reported to have received more than 1.46 million orders in its first week of operation.

Armbrust American (https://www.armbrustusa.com/) was founded in 2020 by Y-Combinator alumnus Lloyd Armbrust. It is currently ramping up to produce 1.2 million masks per day, with plans to scale production to billions annually if needed, the company said in a release.

In March, the Department of Health and Human Services estimated America had only 1 percent of the 3.5 billion masks needed to properly equip healthcare workers combatting COVID-19. At different times and in different places, American heroes on the front lines—from physicians to first responders and local police forces—have been without the proper defenses they need.  On top of all that, the vast majority of PPE is currently manufactured in China, and with a global bidding war driving prices to all-time highs, the industry has become rife with scams and low-quality products.

It was against this backdrop that Lloyd Armbrust decided to do something about the PPE shortage.

“In a uniquely political, American way, we weren’t prepared for this,” Armbrust said in a statement. “But we don’t need a bailout. We don’t need other countries. We need the finest quality products with the most effective materials, full supply chain control, and no foreign dependence. We need Made-in-America, Made in Texas. And masks are just the beginning.”

Armbrust is determined to manufacture a product that doesn’t force Americans to choose between quality and price. The company said that it combines automation with vertical integration to offer masks at a lower price than Chinese suppliers. Individuals can purchase the American-made medical masks for $0.50 on Armbrust’s website, and the company plans to bring prices down as it increases production.

“Our Austin, Texas lab uses automation to turn raw materials into quality surgical masks,” said Armbrust. “And because we are so space efficient, we are even prepared to install unused assembly lines for the next potential crisis, making sure that America is never without the protection we need.”

Lloyd Armbrust was previously the founder and CEO of OwnLocal, a company that automates production for 3,500 newspapers worldwide.