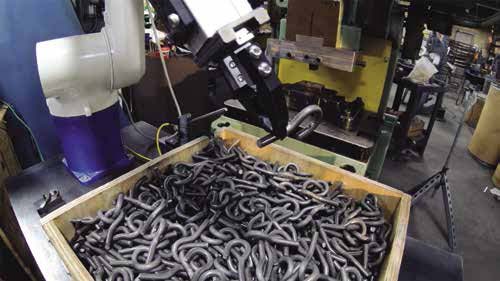 A robot at work for Ace Wire Spring. Using innovative hardware, advanced algorithms, and engineering expertise, a robot now picks hooks out of the bins and places them into a press. Photo courtesy of Ace Wire Spring & Form/CapSen Robotics.

When Ace Wire Spring & Form Co., Inc., realized it had a long-running machine tending job that required workers to reach into a bin and pick out a single wire hook 400,000 times a year, Ace looked for a robot to free up its workers for more important work.

To accomplish the task, the firm needed a robot that could recognize a hook, pick it up, shake off extra hooks it picked up on its way out of the bin, and then put the hook in a press.

“An advantage of using the robot is cost efficiency. By the robot working on this repetitive, manual process, Ace’s employees are available to work on other projects needing their attention,” said Linda Froehlich, a company owner. Those tasks include heat treating, hand cutting, hand bending, and other jobs a human must do. In addition to freeing up workers to do other tasks, it turns out the robotic cell makes fewer mistakes, has less downtime, and can run lights out. That saves Ace money.

“Another advantage is lower pricing. With the robot available for work on current and future projects, the costs of manufacturing go down, and this decrease can be passed on to the customer in the form of lower pricing,” Froehlich said. Ace Wire Spring & Form (https://www.acewirespring.com/), a family-owned business now 81 years old, is located in McKees Rocks, Pennsylvania.

Froehlich said when Ace wanted a robot to handle the work, the company worked with the Catalyst Connection, a non-profit that has been advocating economic development and manufacturing in southwestern Pennsylvania for the last 40 years. Ace worked with the Advanced Robotics for Manufacturing Institute, a nationwide organization that encourages workforce development and the use of robots. The two led Ace five miles south into Pittsburgh to CapSen Robotics, which provides vision and movement software to make robots more useful.

CapSen Robotics (www.capsenrobotics.com), six years old, was founded in late 2014 by a former Carnegie Mellon University robotics student who went on to earn his Ph.D. at the Massachusetts Institute of Technology. He returned to Pittsburgh, a hotbed for robotics and manufacturing. The founder and CEO, Jared Glover, studied 3D vision and robotic movement, and CapSen uses his software to improve robots.

“Typically, robots are dumb,” said Mark Stevens, director of business development at CapSen Robotics, in an interview with D2P. Stevens meant robots have to be taught how to recognize parts, how to move, and how to see and move efficiently. CapSen writes software to do that. Robots are not born with hands, so a part to be picked may require its own gripper and “fingers.” Armed with the appropriate hands, the robot must be taught to see a part and move appropriately. 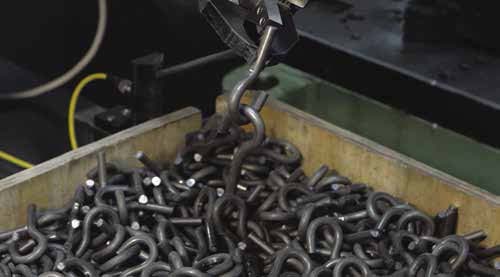 Ace Wire Spring & Form’s CapSen robotic arm has picked up one hook, with a second attached. The arm will now rotate and drop off the extra hook. Photo courtesy of CapSen Robotics.

“It’s the 3D vision software that controls the robot,” Stevens said. “It gives the robot spatial awareness. Motion control and planning tells the robot how to pick it up in a certain way so it can put it in the machine in the right way.”

CapSen Robotics’ first product, CapSen PiC (“Pick in Clutter”), enables robots to pick jumbled parts from a bin. Each part may require its own gripper to pick it up. For example, a nut is different from a screw, and they’re both different from a box or a hook. The vision and the gripper are modified for the part, but experience informs each new project. Stevens said CapSen is building a library of parts and items it knows how to pick up. Armed with that experience, CapSen looks forward to the day when that library will help customers who have hundreds of plants across the globe, so instead of installing one robotic system at a time, CapSen will help them install hundreds.

“We’re using state-of-the-art robotics and software to transform old manufacturing businesses,” said Jared Glover, in a CapSen video describing the Ace robot project. “We don’t build the robots, but we give them more spatial intelligence with the software that we write for 3D vision and motion planning, so that they can recognize objects and plan their motions intelligently for tasks like disentangling objects and machine tending, and pick-and-place. And it does that in a way that is flexible, so the robots can be repurposed quickly for different parts and different tasks.”

Stevens said CapSen Robotics develops software, not robots, and its software is “robot agnostic,” meaning its vision and motion software can be used by many collaborative robots from different makers. For the Ace Wire Spring & Form job, CapSen and Ace picked the Precise PAVS6 six-axis robotic arm from Precise Automation. CapSen programmed the robot, and in that case, CapSen improved the gripper by 3D printing fingers for picking up hooks and then putting them into the press, two separate steps.

In addition to teaching the robot to see what it’s supposed to see in the bin, CapSen also 3D printed the fingers until they were just right.

“We do the 3D printing of the fingers that go onto the (Ace) gripper,” Stevens said. “It’s not one size fits all. We printed about 20 of them before we got exactly what we wanted.”

Precise Automation, founded in 2004, offers what it calls the only complete family of collaborative industrial robots. The president of Precise Robotics, Brian Carlisle, won the Engleberger Award for Leadership in Robotics, named after Joseph Engleberger, founder of Unimation, the world’s first industrial robotics company. 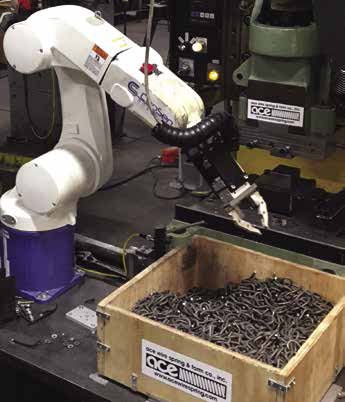 Ace Wire Spring & Form’s CapSen robotic arm has isolated a hook and is about to put it on a peg before swedging it. Photo courtesy of CapSen Robotics.

According to the Robotic Industries Association (RIA), collaborative robot sales into factories are increasing for a number of reasons.

“The primary driving force behind this growth is a consistently decreasing price. Many collaborative robots are available for under $45,000, making them a viable solution in a wide range of applications, inside and outside of the factory setting,” the RIA said on its website.  “Often, little or no programming is required to install them, reducing integration costs. Increasing flexibility opens up a wide range of new tasks and applications that collaborative robots can effectively automate.”

A Task More Difficult than it Looks

Froehlich said the CapSen project cost Ace about $50,000, which is close to what the RIA said many robots cost. It took Ace and CapSen several months to complete the project. CapSen employees studied the problem of lifting a hook out of a bin of hooks—a more difficult task than picking a nut out of a box because each hook can grab more hooks on its way out. Nuts don’t do that. CapSen employees modeled the problem, and wrote motion programs to teach the robotic arm how to drop the extra hooks.

The RIA called the national shortage of manufacturing workers one of the industry’s biggest challenges. At Ace, that was an additional reason for buying a robotic arm. “Yes, absolutely. We are currently looking for people for multiple positions, and cannot find people,” Froehlich said.

Ace specializes in manufacturing custom designed and engineered springs to meet a specific customer’s application. It produces tight tolerance production springs while maintaining accurate repeatability, higher quality, and greater durability. The company doesn’t rely on an extensive inventory of standard springs, but specializes in custom manufacturing to the customer’s specifications. Each quotation is sent to the engineering and design team to create a spring that meets the customer’s tolerances and critical needs.

The CapSen robot was brought on to sort hooks from a bin and place them in a press for swedging. The hook material is a 0.218-inch medium basic wire that is formed into a hook about 2.5 inches long and 1 inch wide at its widest. It weighs a few ounces. The end is swedged to hold hardware. It is part of a swivel extension spring assembly that is used in lawn care power equipment. Ace manufactures between 300,000 and 400,000 of the hooks a year.

The gripper had to accomplish several tasks. Using software it wrote and fixtures it built, CapSen had to teach the arm how to pick up a hook from the pile inside the bin, and then swivel and twist until any extra hooks fell back into the box. The arm would then set the hook on the peg. CapSen also printed the model peg fixture to make sure that step was correct. Next, the gripper takes the hook from the peg and places it in the press, where the end of the hook was flattened (swedged). Then it takes the hook and drops it into the box of swedged hooks.

The CapSen robotic software was designed to speed up the work. As it picked up the first hook, the robotic arm plans and remembers its next pick. As it moves toward the peg, the arm twists and rotates until extra hooks fall back into the bin. It sets the hook on the peg. Now that the hook is on the peg in the right position for the next step, the arm takes the hook from the peg and inserts it into the swedging press. Then it removes the hook from the press and drops it into another bin. Then it remembers its next pick and starts over again.