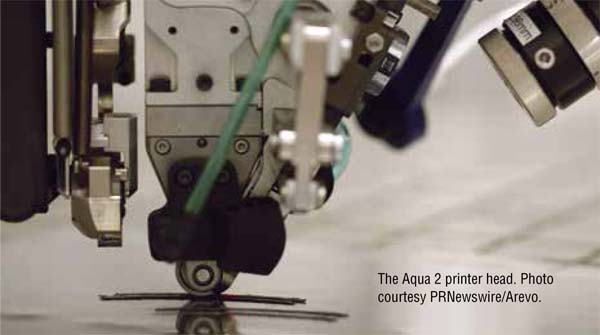 MILPITAS, Calif.—A new high-speed additive manufacturing system from Arevo is reported to print custom composite parts up to one cubic meter in size. The Aqua 2, intended for large, continuous carbon fiber composite structures, can print four times faster than its predecessor while enabling higher quality, the company said in a release.

Arevo introduced the Aqua 2 while announcing that it closed a Series B financing round led by Defy Partners and GGV Capital (GGVC), with participation from Khosla Ventures, Alabaster, and others. The financing brings Arevo’s total funding to $60 million.

“Arevo’s new platform enables fabrication of high strength, low weight carbon fiber parts, currently not possible with today’s standard techniques,” said Trae Vassallo, founding partner at Defy, in the release. “We are thrilled to be working with the team to help scale up this incredibly impactful technology.”

“We are excited to have Defy and GGVC on board to bring not only capital but a vast amount of strategic experience,” said Hemant Bheda, Arevo’s co-founder and chairman, in the release. “The strong interests in the company despite tough market conditions really reaffirm our vision.”

The announcements come on the heels of Arevo’s crowdfunding campaign to make its first direct-to-consumer products, the Superstrata bicycle and e-bicycle. The bicycles are said to be the first true unibody, custom 3D-printed carbon fiber bikes (see pp. 40 and 42). The campaign reportedly hit its goal of $100,000 in less than three minutes after launch, and is on track to surpass $5 million from more than 3,000 backers, Arevo said.

“We are looking for additional mechanical engineering and process / materials science talent, especially people who are skilled with composites,” Bheda said in the release.