Process Is Scaled to Yield Material with 90 Percent Graphene Content 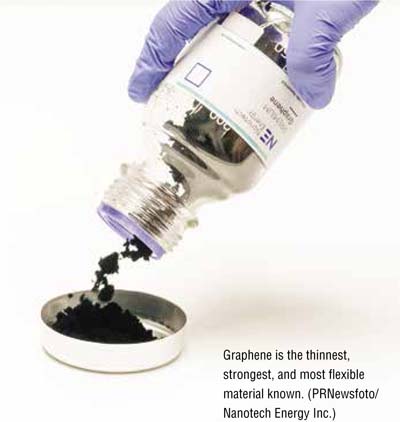 LOS ANGELES—Graphene manufacturer Nanotech Energy Inc. reported it has developed and scaled a process for production of graphene with more than 90 percent of its content in monolayers. It is the purest form of graphene available in mass production quantities, the company said in a release.

“The use of graphene as a safe super-conductor has held tremendous promise,” stated Dr. Jack Kavanaugh, chairman and CEO of Nanotech Energy Inc., in the release. “Yet, the majority of graphene production contains less than 10 percent of graphene content, meaning 10 layers or less, which has made the mass market adaptation to graphene slow and suspect. The purity of our graphene now can provide manufacturers and product developers with the confidence they need to expand technological development of higher-quality, safer products that will ultimately benefit consumers and change lives.”

Graphene is the thinnest, strongest, and most flexible material known. It is 200 times stronger than steel, 97 percent transparent, extremely light in weight, flexible, and stretchable. The more “layers” that manufactured graphene contains, the less conductive it is. At 90 percent, Nanotech’s graphene is the closest to single-layer that is available—one million times faster than CVD graphene and 100 times faster than graphite used in batteries, the company said.

For years, the graphene industry has underperformed due to the general poor quality of the material. Dr. Novoselov, the discoverer of graphene, noted two years ago in the Journal of Advanced Materials that “the quality of the graphene produced in the world today is rather poor, not optimal for most applications, and most companies are producing graphite microplatelets….It helps (us) to understand why graphene applications are not commonplace yet, (as the) material properties (of) graphene and graphite are very different and cannot be interchanged in many important applications, such as coatings, composites, and batteries.”

“The graphene that Nanotech Energy is now producing exhibits outstanding electrochemical properties and a unique combination of large surface area, high electronic conductivity, and excellent mechanical properties,” stated Dr. Maher El-Kady, co-founder and chief technology officer of Nanotech Energy, in the release. “Our graphene products have the potential to radically transform the graphene industry by providing high-quality graphene that can be used in a wide range of products with unparalleled performance, including batteries, supercapacitors, functional inks, conductive epoxy, and EMI shielding.”

Nanotech Energy (https://nanotechenergy.com/) said that it owns the world’s first graphene patent, filed in 2002 by Dr. Richard Kaner, Nanotech co-founder and UCLA professor of chemistry and of materials science and engineering. Dr. Kaner filed the patent two years prior to the notable graphene work of Nobel laureates Geim and Novoselov.

In anticipation of the product line launches, Nanotech Energy is currently in sales discussions with numerous global manufacturers, the company said.

Is a Stretchable Smart Tablet in Our Future?