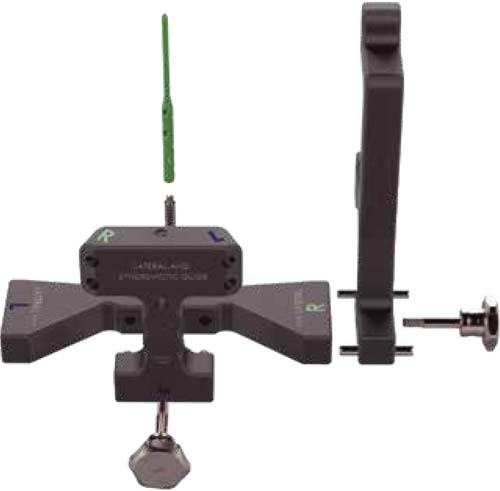 When neurosurgeon Rohit Khanna, M.D., of Halifax Health Medical Center, searched for a company to make a prototype medical device, a colleague sent him to AIP Precision Machining, a neighbor in Daytona Beach, Florida.

“You’re not coming to us for consumer products or boat parts,” said MacDonald in a telephone interview with D2P.  In the right plastic, AIP can hold a tolerance of 0.002. When people think about plastics, they think about commodities, not such a precise tolerance. “We make exact and accurate mission-critical parts. We might make 10 pieces for one customer. They’re meant to last. They’re not disposable.”

Khanna visited AIP to create a part that could help reduce the need for surgeries on patients who’ve suffered a stroke or traumatic brain injury (TBI). A case study published on the AIP website said that such patients often undergo multiple surgeries to relieve swelling of the brain. Each brain surgery was reported to bring a 35 to 50 percent chance of creating further medical complications.

“In order to reduce the risks of subjecting these patients to repeat surgeries and, obviously, affecting their overall mortality and morbidity, I tried to figure out what we could do to reduce the need for surgeries,” Khanna said in the case study.

In addition to medical, AIP machines devices and parts used in the aerospace, energy, and specialty industrial fields.

AIP specializes in machining tight tolerance, high performance plastic parts for a range of industrial purposes. In addition to medical, the company machines devices and parts used in the aerospace, energy, and specialty industrial fields. To avoid contaminated parts and to meet tight medical requirements, no metal is machined inside AIP, which employs 32 people.

The company machines parts for satellites, chemical detection devices, landing gear components, and military targeting and defense sensors, as well as for aircraft engines, systems, and structural components. That’s anywhere from 25 to 30 percent of the company’s business, MacDonald said. “These products are lightweight, radar absorbent, and made to last in extreme temperatures. Additionally, they follow strict adherence to industry specifications.”

The semiconductor industry requires parts that will survive and function properly in extreme high pressure, extreme wear, and vacuum conditions, and in the presence of corrosive chemicals. The plastics used in electronics and semiconductors are PEEK, Polysulfone, Radel, PPS, ULTEM, Torlon, and Delrin, among others.

Another 45 percent of AIP Precision Machining’s business is in medical parts, and about 10 to 15 percent of the business is energy products. The balance is specialty industrial, such as food processing and heavy equipment, among others. The company holds certifications to the ISO 13485: 2016,  ISO 9001: 2015, and AS9100D quality management system standards.

AIP is FDA registered, which means it abides by the FDA’s manufacturing protocols to reduce risk, plus it keeps accurate records, MacDonald said. He divided the company’s medical work into three sub-categories: instruments, components, and implants.

An example of an instrument is the nailing guide AIP manufactures to help surgeons position a rod that will strengthen a broken bone. Components are parts that go into larger assemblies, such as blood separation devices, and into devices for plasma therapy. The implants, such as spinal cages, are manufactured from PEEK to fit between vertebrae, and to a lesser extent, components in hip and knee replacements. PEEK is polyether ether ketone, a thermoplastic polymer.

The device developed by Khanna is outlined in a case study, “Neurosurgery and Precision Machined PEEK Come Together, Reducing the Need for Brain Surgeries,” published on the AIP website. Khanna designed the device for a surgical technique called dynamic telescopic craniotomy. 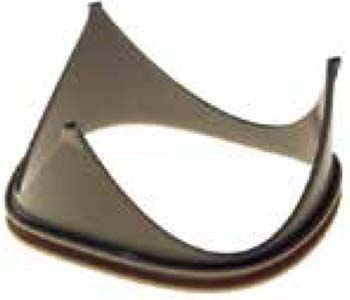 This component, the frame of an aortic heart valve replacement, is made of implant-grade PEEK. Photo courtesy of AIP Precision Machining.

The device holds a portion of the skull (the “bone flap”) and the rest of the skull together, expanding and contracting as needed. That’s important if the patient’s brain swells. If the brain swells, the opening widens, and the assembly expands with it and covers it. MacDonald said AIP’s expertise in implantable plastics helped Khanna refine his idea.

Refining the idea involved Khanna’s visiting AIP and talking to MacDonald and the design engineers. The process was “pretty direct,” MacDonald said. Khanna would examine the part and explain what he wanted to change.

“We’ll all sit around the table, three or four of us, and we’ll make a decision after talking about his experience and suggestions,” MacDonald said. “He’s been on our manufacturing floor before while we’re making it. We run into a few questions and we answer them.

“From our perspective, we’re going to provide feedback for design for manufacturing,” he continued. “We did that to make it more manufacturable. We’ve done a number of sliding fits and we had some ideas.”

Khanna developed the device—a telescopic assembly—for patients who’ve suffered a stroke or a traumatic brain injury. The device is flexible and strong enough to hold the skull together and expand if the brain swells.

“He came up with a concept, a two-piece telescoping design. Attach the pieces and it’s going to allow it to expand as the pressure increases. It allows the skull to expand. It’s almost this living thing that telescopes in and out as needed,” MacDonald said.

Knowledge of Materials Is Key

Different materials have different properties that cause them to behave differently. AIP brought  its knowledge of these differences, along with its design for manufacturability expertise, to the project. The device was for a humanitarian purpose that the engineers wanted to work on.

“It was Dr. Khanna’s design,” MacDonald said. “We were just able to refine the sizes and the tolerances to make it work properly. He had ideas about how the pieces would fit together and how they’d work. Some refinements made the wheel rotate better. We didn’t invent the wheel. We made it work better.”

AIP’s engineers drew upon their experience in machining medical components to recommend the material. It needed to be “flexible, strong, and sensitive enough to swell with the brain but also keep the bone flap and skull together,” the company said in the case study outlining the development of the device. After deciding on PEEK, a material with excellent biocompatibility and ductility, AIP’s team worked in close cooperation with Khanna to machine the device.

“A lot of it has to do with knowing the material,” MacDonald said. “We’ve machined polymers for 35 years.”

Once AIP created a prototype, Khanna tested it and suggested improvements. The process took about two years. The FDA is reviewing the device. The part itself is roughly 1 inch x 0.5 inch x 0.5 inch.

“There is a lot of enthusiasm for these plates,” Khanna said in the case study. “We just need FDA approval to start reducing the need for surgeries and improving the lives affected by brain injuries and strokes.”

“There’s a lot of enthusiasm for these plates,” Khanna said in the case study. “We just need FDA approval to start reducing the need for surgeries and improving the lives affected by brain injuries and strokes.”

Khanna added that he was very impressed by the team at AIP.

“They are very knowledgeable and took the time to work with me to develop our device with great insight into the most efficient and cost-effective method possible,” he said. “The technical expertise, along with personal attention and prompt responses, make AIP a valuable company to work with.”

“I have been very impressed by the team at AIP,” noted Khanna in the case study. “They are very knowledgeable and took the time to work with me to develop our device with great insight into the most efficient and cost-effective method possible.”

AIP also works on other medical parts, including components used in hip and knee replacements. One of the materials it machines is ultra-high-molecular-weight polyethylene (UHMWPE). The material is considered durable and chemical resistant, and has a low coefficient of friction. It is popular in countless industrial applications.

“AIP makes the round ball at one end of the implant,” MacDonald said. “The metal portion that is driven into the femur is made of titanium or another metal. UHMW[PE] isn’t an expensive material. It’s super slick; it’s like Teflon. It can’t bear high temperature or a super high weight, but for low load wear, it’s awesome. That’s why they use it in any hip, knee, any articulating joint in your body.”

An ultra-high-molecular weight polyethylene part is more challenging to machine in some circumstances than aluminum. It is more expensive to machine than aluminum because it takes longer. The ball portion of a hip replacement could be UHMWPE. It is super slippery, MacDonald said, and people are so shocked by its machining difficulty they can hardly understand it. “People can’t believe it. ‘It’s plastic,’ they say, but sometimes it’s painful to watch the machine. ‘Can’t it go faster?’ That’s a function of holding the tolerances,” MacDonald said.

Medical parts machined by AIP include spinal devices to fit between vertebrae, and AIP’s surgical or trauma tools that are durable enough to be reused. They also include orthopedic instruments and equipment and other implants made from PEEK.

Implants, such as spinal implants or bone rods, are set in place by surgeons using X-ray in real time, MacDonald said, and the material gives surgeons the ability to see right through the implants and tools as they work. “They’re invisible to X-ray. They can see right through to the bone to what’s going on. They’re so strong, they’re made out of carbon fiber PEEK.”

The surgical tools used in the operations are made of carbon fiber PEEK, are sustainable, and can be cleaned in a high-temperature autoclave for reuse. The tool might be used to help a surgeon set a rod in a broken leg or other bone. “Nowadays, everything is disposable, MacDonald said. “Our instruments are reusable. Why buy a new screwdriver every time you turn a screw?”

Wire and Spring Manufacturers Are Strong in Automation, Materials, Precision