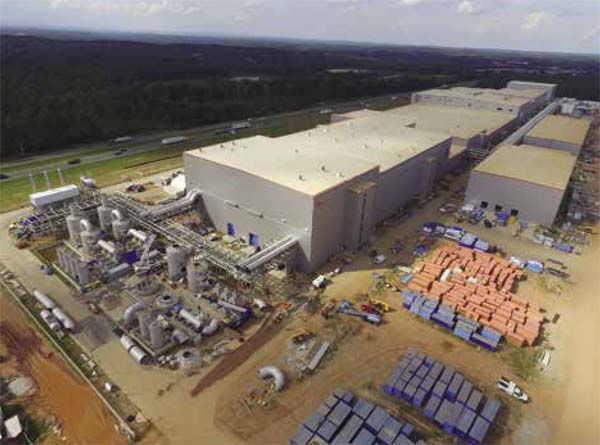 COMMERCE, Ga.— SK Innovation is planning to hire more than 1,000 skilled American workers by the end of 2021 as it prepares for initial production at the first of two electric vehicle (EV) battery plants being built in Commerce, about 70 miles northeast of Atlanta, the company said in a release.

Reported to be one of the largest economic projects in Georgia’s history, SK Innovation’s long-range investments would make Georgia one of the largest hubs of EV battery manufacturing in the world. The company is supported on the project by the State of Georgia, Jackson County, and the city of Commerce.

SK Innovation recently reached a hiring milestone with the on-boarding of its first 60 employees at the Commerce site. These employees include production supervisors; production, process, and electrical engineers; and quality and logistics specialists who will set up, work, and serve as trainers for the EV battery production workforce at the two SK Battery America plants under construction at the site.

The company also recently achieved key construction milestones at the Georgia site with the completion of the exterior of its first manufacturing plant and ground-breaking on the second plant. Together, the two SK Battery America plants will have capacity to make enough battery cells each year to power the equivalent of more than 300,000 electric vehicles, the company said.

“If you drive along I-85 northeast of Atlanta, you can’t miss the progress taking shape at the new SK Innovation facilities in Jackson County,” said Commissioner Pat Wilson of the Georgia Department of Economic Development, in the release. “With today’s announcements, SK Innovation is well on their way to fulfilling the $2.6 billion investment commitment and 2,600 promised jobs they will create in our state.

“We thank our partners at Georgia Quick Start and Lanier Technical College for providing the specialized training for so many local employees, and our area economic development partners for their commitment to success,” Wilson continued. “The electric vehicle battery plant underway in Commerce will put Georgia in the driver’s seat for the next era of the auto industry and ensure our economy keeps growing at a time when we need jobs most.”

SK Innovation (http://eng.skinnovation.com/), South Korea’s largest energy company, is building two EV battery plants at the Georgia site as part of a $2.6 billion investment in its U.S. battery business that is projected to  directly create more than 2,600 permanent jobs in the Jackson County area by 2024. The first SK Battery America plant is scheduled to begin initial operations in 2021, with mass production in 2022. A second plant at the same site is expected to begin mass production in 2023.

As the market for electric vehicles continues to grow, SK Innovation is committed to making Georgia a world leader in EV battery manufacturing.

“We are only at the very beginning of what will be a long-term positive impact on Jackson County and the City of Commerce from the SK Battery America site,” said Commerce Mayor Clark Hill, in the release. “This is a transformational economic development project that will fuel new job opportunities for our region, spur more spending across Jackson County, and establish Commerce as a center for innovation in a fast-growing part of the economy. The impact is even more significant as the region and entire U.S. look for hope and job growth coming out of the pandemic.”

The new jobs that will be created in Jackson County include a range of technical roles from production operators to senior engineers focused on manufacturing highly sophisticated lithium-ion battery cells at scale. To help begin the process of hiring and training workers, SK Battery America has signed a partnership agreement with Quick Start and Lanier Technical College in Georgia.

Quick Start is Georgia’s economic development program that provides customized workforce training at no cost to qualified businesses in Georgia. It is reported to have trained more than 1.25 million workers through nearly 7,000 projects since 1967. Lanier Technical College provides technical and adult education to support the economic development and well-being of the people, communities, and companies of various counties, including Jackson County.

“At a time when the global economy is facing unprecedented challenges, we are committed to doing our part to drive economic development and recovery in the region and, at an individual level, provide area residents an exciting path forward for career development,” said SK Innovation CEO Jun Kim, in the release. “We are working with a variety of partners and local academic institutions to train and recruit new workers that will help us achieve a competitive advantage in the EV industry. We look forward to continuing to work together with Georgia and Jackson County to establish a world-class center of excellence in EV battery production.”

SK Battery America, SK Innovation’s U.S. subsidiary, began initial hiring and training of employees this year at the Georgia site, and plans to have more than 150 employees by the end of this year. It anticipates hiring another 900 employees next year, the company said.

SK Innovation is an affiliate company of Seoul-based SK Group, South Korea’s third-largest conglomerate. SK Group companies have made significant investments in the U.S. in the areas of sustainable energy, biopharmaceuticals, advanced materials, and semiconductors, reaching $5 billion in investments in the U.S. over the past three years, the company said.