In fiscal year 2020, Sandia National Laboratories purchased more than $1.4 billion in goods and services from suppliers and added more than 540 new small businesses to its supplier base. As Sandia strengthens its commitment to diverse suppliers capable of contributing to its national security mission, one of its research teams is busy leveraging machine learning to reduce the time needed to design materials that are compatible with specific components.

ALBUQUERQUE, N.M. — Driven by the purchasing of goods and services and payroll, Sandia National Laboratories injected an all-time high of more than $3.76 billion into the economy in fiscal year 2020.

“It’s no secret that the second half of the year was tough on a lot of people and businesses, especially smaller companies, which is why we are extremely proud to be able to support local and state communities and companies through our business activities,” said Scott Aeilts, Sandia’s associate labs director of Mission Services.

More than $1.4 billion was spent to purchase goods and services from suppliers, including nearly $482.6 million with New Mexico businesses and more than $349.7 million in subcontracts with the state’s small businesses.

“We will continue to build on our successes in developing partnerships with highly qualified, diverse suppliers that can contribute to our national security mission and help us return that investment to the communities, the states and the country that we serve,” Aeilts said.

In addition, the economic impact included nearly $1.67 billion in payroll during Sandia’s fiscal year from October 1, 2019, to September 30, 2020. Sandia added about 460 new positions last year, helping to raise the number of Sandia employees above 14,400.

According to the 2020 Sandia Economic Impact brochure, released on January 27, 2021, Sandia’s more than $3.76 billion in spending was an increase of more than $86.8 million compared to fiscal year 2019. During fiscal year 2020, Sandia spent more than $1.4 billion on goods and services — including about $1.33 billion in subcontract payments and roughly $72.5 million in procurement-card purchases.

In addition, Sandia paid nearly $100.3 million in corporate taxes, an all-time high of about $98 million being in gross receipt taxes to the state of New Mexico in fiscal year 2020. The labs spent nearly $2.26 billion on labor, including payroll, and other non-subcontract related payments. That was up about $91.2 million from fiscal year 2019.

A History of Strong Commitments to Small Businesses

“The COVID-19 pandemic was a blow to so many, especially small businesses, but the nearly $483 million spent by Sandia within the state of New Mexico last year helped the economy during a difficult time,” Sedillo said. “Spending in New Mexico remains strong, and that is a great thing.”

One of those small businesses is Hacienda Home Centers, with offices in Albuquerque and stores in Española and Las Vegas, New Mexico. The provider of maintenance, repair, and operations products plus building materials is also in the process of opening a store, HHC Supply, near Kirtland Air Force Base in Albuquerque that caters to businesses and government agencies.

“It’s been very easy to work with Sandia, from the contract administrators to the people making requests for materials,” said Joe Sanchez, vice president of Hacienda Home Centers.

“It’s been tough lately for small businesses,” he said. “The contract with Sandia has really helped us to continue to grow. It gives us confidence to expand.”

Hacienda, a HUBZone, veteran-owned small business, signed a contract with Sandia about five months ago after attending several small-business forums hosted by the labs before the coronavirus pandemic, Sanchez said.

The Drive Continues for Small and Diverse Suppliers

“It is hard work and resiliency that make small businesses special,” Sedillo said. “That’s why Sandia is dedicated to working just as hard to ensure that small and diverse businesses have every opportunity to work with Sandia National Labs. Small businesses are vital to the labs and our nation.”

Small businesses are encouraged to reach out to Sandia’s supplier diversity department at supplier@sandia.gov with questions on doing business with the labs.

This article was released by Sandia National Laboratories on January 27, 2021.

Advanced Materials in a Snap 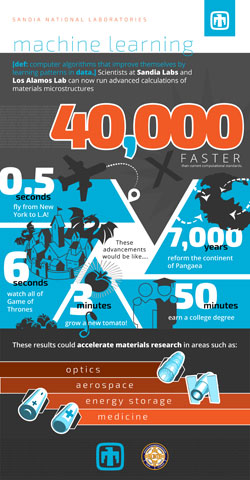 ALBUQUERQUE, N.M. — If everything moved 40,000 times faster, you could eat a fresh tomato three minutes after planting a seed. You could fly from New York to L.A. in half a second. And you’d have waited in line at airport security for that flight for 30 milliseconds.

Thanks to machine learning, designing materials for new, advanced technologies could accelerate that much.

Their results, published January 4, 2021 in npj Computational Materials, could herald a dramatic acceleration in the creation of new technologies for optics, aerospace, energy storage, and, potentially, medicine, while simultaneously saving laboratories money on computing costs.

“We’re shortening the design cycle,” said David Montes de Oca Zapiain, a computational materials scientist at Sandia who helped lead the research. “The design of components grossly outpaces the design of the materials you need to build them. We want to change that. Once you design a component, we’d like to be able to design a compatible material for that component without needing to wait for years, as it happens with the current process.”

“We’re shortening the design cycle,” said David Montes de Oca Zapiain, a computational materials scientist at Sandia who helped lead the research. “The design of components grossly outpaces the design of the materials you need to build them. We want to change that. Once you design a component, we’d like to be able to design a compatible material for that component without needing to wait for years, as it happens with the current process.”

The research, funded by the U.S. Department of Energy’s Basic Energy Sciences program, was conducted at the Center for Integrated Nanotechnologies, a DOE user research facility jointly operated by Sandia and Los Alamos national labs.

Sandia researchers used machine learning to accelerate a computer simulation that predicts how changing a design or fabrication process, such as tweaking the amounts of metals in an alloy, will affect a material. A project might require thousands of simulations, which can take weeks, months, or even years to run.

The team clocked a single, unaided simulation on a high-performance computing cluster with 128 processing cores (a typical home computer has two to six processing cores) at 12 minutes. With machine learning, the same simulation took 60 milliseconds using only 36 cores–equivalent to 42,000 times faster on equal computers. This means researchers can now learn in under 15 minutes what would normally take a year.

Sandia’s new algorithm arrived at an answer that was 5 percent different from the standard simulation’s result, a very accurate prediction for the team’s purposes. Machine learning trades some accuracy for speed because it makes approximations to shortcut calculations.

“Our machine-learning framework achieves essentially the same accuracy as the high-fidelity model but at a fraction of the computational cost,” said Sandia materials scientist Rémi Dingreville, who also worked on the project.

Benefits Could Extend Beyond Materials

Dingreville and Montes de Oca Zapiain are going to use their algorithm first to research ultrathin optical technologies for next-generation monitors and screens. Their research, though, could prove widely useful because the simulation they accelerated describes a common event — the change, or evolution, of a material’s microscopic building blocks over time.

Machine learning previously has been used to shortcut simulations that calculate how interactions between atoms and molecules change over time. The published results, however, demonstrate the first use of machine learning to accelerate simulations of materials at relatively large, microscopic scales, which the Sandia team expects will be of greater practical value to scientists and engineers.

For instance, scientists can now quickly simulate how miniscule droplets of melted metal will glob together when they cool and solidify, or conversely, how a mixture will separate into layers of its constituent parts when it melts. Many other natural phenomena, including the formation of proteins, follow similar patterns. And while the Sandia team has not tested the machine-learning algorithm on simulations of proteins, they are interested in exploring the possibility in the future.

This article was released by Sandia National Laboratories on January 5, 2021.

Is a Small Design Flaw Robbing Manufacturers of Valuable Time and Productivity in Milling Operations?