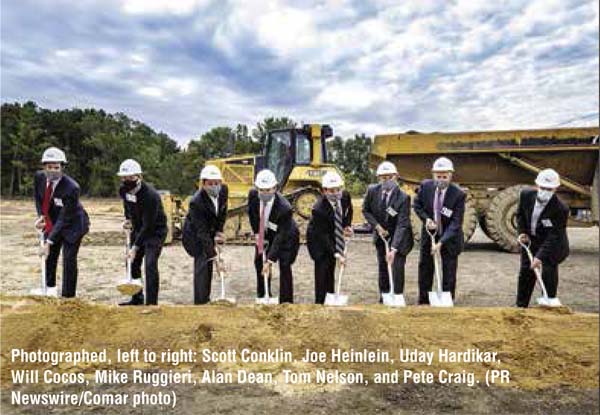 VOORHEES, N.J.—Comar, a supplier of specialty packaging and custom molded medical devices and assemblies, recently held a groundbreaking ceremony with representatives from the city of Vineland, Cumberland County, and the state of New Jersey to celebrate the start of construction on the new Comar Vineland manufacturing facility, the company said in a release.

“Vineland has a special place in our hearts,” said Comar CEO Mike Ruggieri, in the release. “My grandfather started the Comar company in Vineland on Valley Avenue in 1949, making glass syringes for the healthcare industry. The business grew rapidly over the decades and eventually relocated as we transitioned from glass into plastics molding in 2006. Now, 14 years later and seven times bigger, it is exciting to be back in Vineland, where we have our roots.”

During the ceremony, New Jersey State Senator Michael Testa Jr. congratulated Comar for its ability to thrive and create jobs despite the challenges brought about by the pandemic. He bestowed Comar with a certificate of “Commendations and Praises” from the State of New Jersey Senate and General Assembly. A commemorative letter from U.S. Senator Robert Menendez acknowledged the historic occasion.

Comar was also presented with a Congressional Proclamation from the Office of U.S. Congressman Jefferson Van Drew, recognizing the company as an inspiration to all through its achievements, energy, and drive to shape the future.

The Vineland facility is on track for “substantial completion by March 2021, with production machinery installed shortly thereafter,” the release said.