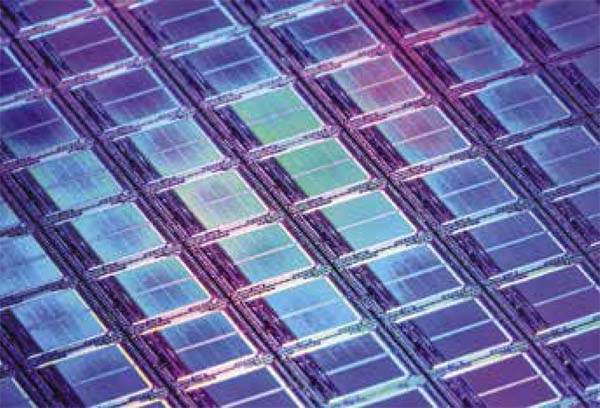 MIT researchers have found that an alloy material called InGaAs could be suitable for high-performance computer transistors. If operated at high-frequencies, InGaAs transistors could one day rival silicon. This image shows a solid state memory wafer traditionally made of silicon. (MIT image)

Once deemed suitable only for high-speed communication systems, an alloy called InGaAs might one day rival silicon in high-performance computing.

For decades, one material has so dominated the production of computer chips and transistors that the tech capital of the world — Silicon Valley — bears its name. But silicon’s reign may not last forever.

MIT researchers have found that an alloy called InGaAs (indium gallium arsenide) could hold the potential for smaller and more energy efficient transistors. Previously, researchers thought that the performance of InGaAs transistors deteriorated at small scales. But the new study shows this apparent deterioration is not an intrinsic property of the material itself.

The finding could one day help push computing power and efficiency beyond what’s possible with silicon. “We’re really excited,” said Xiaowei Cai, the study’s lead author. “We hope this result will encourage the community to continue exploring the use of InGaAs as a channel material for transistors.”

Cai, now with Analog Devices, completed the research as a Ph.D. student in the MIT Microsystems Technology Laboratories and Department of Electrical Engineering and Computer Science (EECS), with Donner Professor Jesús del Alamo. Her co-authors include Jesús Grajal of Polytechnic University of Madrid, as well as MIT’s Alon Vardi and del Alamo. The paper was to be presented [in December] at the virtual IEEE International Electron Devices Meeting.

Transistors are the building blocks of a computer. Their role as switches, either halting electric current or letting it flow, gives rise to a staggering array of computations — from simulating the global climate to playing cat videos on Youtube. A single laptop could contain billions of transistors.

For computing power to improve in the future, as it has for decades, electrical engineers will have to develop smaller, more tightly packed transistors. To date, silicon has been the semiconducting material of choice for transistors. But InGaAs has shown hints of becoming a potential competitor.

Electrons can zip through InGaAs with ease, even at low voltage. The material is “known to have great [electron] transport properties,” said Cai. InGaAs transistors can process signals quickly, potentially resulting in speedier calculations. Plus, InGaAs transistors can operate at relatively low voltage, meaning they could enhance a computer’s energy efficiency. So InGaAs might seem like a promising material for computer transistors. But there’s a catch.

InGaAs’s favorable electron transport properties seem to deteriorate at small scales — the scales needed to build faster and denser computer processors. The problem has led some researchers to conclude that nanoscale InGaAs transistors simply aren’t suited for the task. But, said Cai, “we have found that that’s a misconception.”

The team discovered that InGaAs’ small-scale performance issues are due in part to oxide trapping. This phenomenon causes electrons to get stuck while trying to flow through a transistor.

“A transistor is supposed to work as a switch. You want to be able to turn a voltage on and have a lot of current,” said Cai. “But if you have electrons trapped, what happens is you turn a voltage on, but you only have a very limited amount of current in the channel. So the switching capability is a lot lower when you have that oxide trapping.”

Cai’s team pinpointed oxide trapping as the culprit by studying the transistor’s frequency dependence — the rate at which electric pulses are sent through the transistor. At low frequencies, the performance of nanoscale InGaAs transistors appeared degraded. But at frequencies of 1 gigahertz or greater, they worked just fine — oxide trapping was no longer a hindrance. “When we operate these devices at really high frequency, we noticed that the performance is really good,” she said. “They’re competitive with silicon technology.”

Cai hopes her team’s discovery will give researchers new reason to pursue InGaAs-based computer transistors. The work shows that “the problem to solve is not really the InGaAs transistor itself. It’s this oxide trapping issue,” she said. “We believe this is a problem that can be solved or engineered out of.” She added that InGaAs has shown promise in both classical and quantum computing applications.

“This [research] area remains very, very exciting,” said del Alamo. “We thrive on pushing transistors to the extreme of performance.”

One day, that extreme performance could come courtesy of InGaAs.

This research was supported in part by the Defense Threat Reduction Agency and the National Science Foundation.