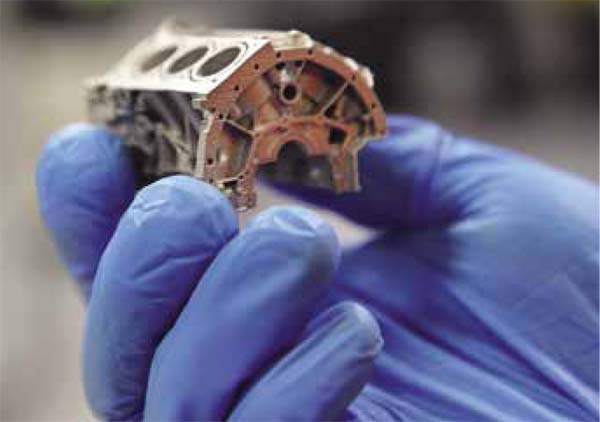 This 6061 aluminum engine block model demonstrates the high-resolution and geometric control that can be produced in a new patent-pending binder jet 3D printing and sintering process developed by ExOne and Ford Motor Co. (Photo: Business Wire)

NORTH HUNTINGDON, Pa—As part of a project co-funded by Ford Motor Company and ExOne Company, a team of engineers, materials scientists, and manufacturing experts recently developed what is reported to be a fast and reliable process for 3D binder jet printing—and sintering—of aluminum. The patent-pending process produces parts with properties comparable to die casting, ExOne said in a release.

For more than 10 years, researchers have failed to develop a commercially viable process in this area. Collaborative and individual patents are expected to be filed by Ford and ExOne as part of the ongoing project, the release said.

Some aluminum alloys can now be 3D printed using lasers, but the process is much slower than the one developed by Ford and ExOne. The new process is expected to optimize Ford’s efficiency by enabling the company to profitably produce complex parts designed exclusively for additive manufacturing. Benefits of the new process are reported to include reductions in part size and weight, parts consolidation, and performance improvements.

“This is a major breakthrough in the manufacture of 3D printed and sintered parts for the automotive industry,” said Harold Sears, technical manager of additive manufacturing at Ford, in the release. “While the 3D printing process is very different from stamping panels, we now have a better understanding of how aluminum behaves, as well as the value it brings in light vehicles. Aluminum 3D printing at high speed creates new opportunities that we are only now beginning to see, given that manufacturing complex aluminum parts was previously impossible. This innovation opens the door to whole new opportunities.”

The new process stems from binder jet technology, widely regarded as the fastest method for high-volume 3D metal printing. It is based on a digital file that allows the rapid projection of a binder on a bed of powdery particles—metal, sand, or ceramic, for example—in order to create a solid part, one layer after another. In metal printing, the finished part must be sintered in a furnace to fuse the particles into a solid object. The heating process enhances the strength and integrity of the metal. Achieving densities above 99 percent is a true breakthrough for the industry, the release said.

“The development of a fast, affordable and convenient method to 3D print aluminum with traditional material properties is a crucial step towards making more products lighter and towards a more sustainable future,” said John Hartner, CEO of ExOne, in the release. “Our talented teams of engineers and scientists are working to solve the toughest problems in 3D printing. This innovation is a clear victory for all of us.”

The joint project between Ford and ExOne began in 2019. Ford led the final material and repeatability tests to verify the accuracy of the process. The Ford-ExOne team is said to be actively working on the applications of the new material and process.