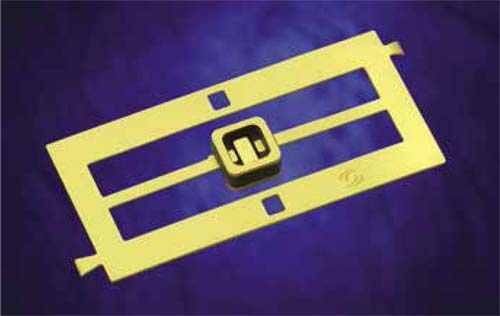 The small-outline, thermally enhanced alumina/glass sidewall packages for power semiconductors are reported to handle temperatures up to 360 degrees Celsius. They are assembled using a glass-to-metal process, combined with gold germanium brazing. (StratEdge image)

SANTEE, Calif.—StratEdge Corporation recently increased its capacity for manufacturing small-outline, thermally enhanced alumina/glass sidewall packages for power semiconductors, the company said in a release. According to StratEdge, the increased capacity is in response to increased requests for the product line.

StratEdge (www.stratedge.com) provides design and production of high-performance semiconductor packages for microwave, millimeter-wave, and high-speed digital devices. Its new line of packages can be used for silicon, silicon carbide, gallium nitride, and other compound semiconductors in power integrated circuit applications. Specific devices include amplifiers, discrete transistors, and diodes where greater than 0.5 Watt power is consumed, the company said.

The thermally enhanced packages are designed for reliability and to mitigate the inherent stresses of brazing dissimilar materials together. All materials used in the packages have matched coefficients of expansion. They are assembled using a glass-to-metal seal process, combined with gold germanium brazing, resulting in a rugged and reliable package. The packages can handle temperatures up to 360 degrees Celsius, according to the release.

A hermetic seal provides enhanced reliability for the device and offers protection from harsh environmental conditions, meeting military standard requirements. Packages in the series are sealed with metal or ceramic lids that have gold-tin solder preforms.

“These packages incorporate copper composite bases or copper inserts for enhanced thermal dissipation,” said Casey Krawiec, vice president of global sales for StratEdge, in the release. “Devices are mounted directly to the metal bases, thus providing excellent electric ground to the backside of the chip. They provide superior electrical performance for frequencies up to at least 6 GHz. For controlled impedance devices, transition designs with higher frequency performance can be utilized.”

Packages are available in various shapes, sizes, and lead counts. All can be provided with gull wing-shaped leads for surface mounting, the company said.