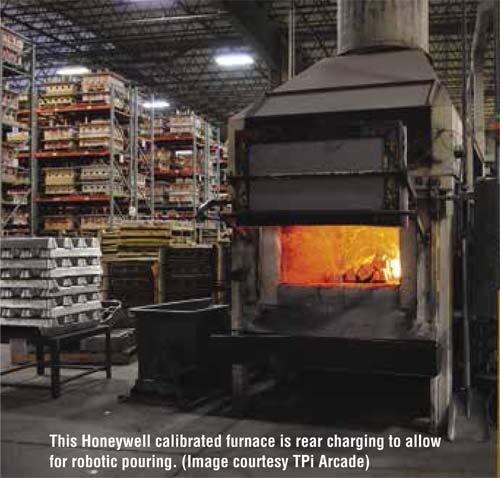 “Our engineers are also dedicated program managers that provide a single point of contact for our customers, from their design conception to delivery of first production run,” Depczynski said in an emailed response.

The firm is ITAR compliant and AS9100:2016 certified for the manufacturing of aluminum V-Process castings. The scope of its certification includes melting, molding, cleaning, and heat treatment.

The “V” in V-Process stands for vacuum. V-Process sand requires no binder, resulting in a smoother and denser metal. Instead, it vacuum packs the sand between sheets of thin plastic film, according to the firm’s website. The mold’s top half—the cope—and  bottom half—the drag—are draped with the plastic film, which keeps sand away from the pattern in the center being molded. That smooths the part finish. The plastic and the vacuum hold the sand in place, producing an improved finish and allowing for thinner, vertical walls.

The process is reported to offer surface finishes superior to those of traditional sand casting by using a fine sand without a binder. For consumer-facing products, a smooth finish is more appealing than a rough surface. The V-Process uses finer sand, which leads to a finer part finish. The surface finish is between 125 RMS and 150 RMS, whereas traditional sand-casting results in a surface finish between 250 and 500 RMS. 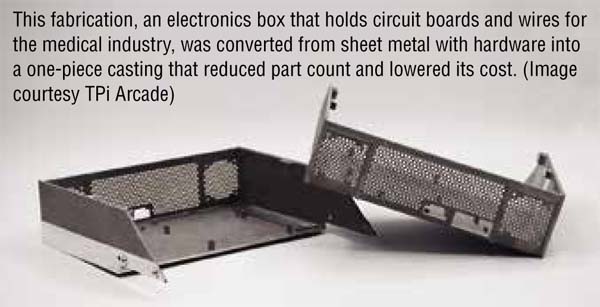 The RMS scale represents surface roughness by measuring the root mean square between a surface’s peaks and its valleys. A lower number means the difference between valleys and peaks is smaller, so the part is smoother. A rough surface may require post-processing to smooth it out, thereby adding to cost.

A customer not familiar with V-Process might assume a minimum wall thickness is 0.25-inch. But the V-Process allows TPi Arcade to form vertical (no draft) walls as thin as 0.125-inch, an advantage that saves material, space, and post-processing costs. The narrowest walls are about 0.25-inch thick in sand casting, but they must be cast wider at the base, forming  a taper or draft. “Without a taper, there is no release. It’s usually about two degrees per inch,” Depczynski said.

The draft adds extra metal, reducing the size of the interior. If a customer needs that space inside a box, traditional sand casting requires post-processing to machine the draft away. But the V-Process walls eliminate that step—thereby saving cost—because they are vertical and don’t require machining to remove draft.

“It’s a near-net shape using less material and less post-processing,” said Nicole Barnum, customer experience and marketing manager for TPi Arcade, in a phone interview. Near-net shape means the parts coming out of the mold are close to the final shape of the finished part, and therefore require minimal machining, grinding, or other secondary processing.

The V-Process manufacturing method came to the United States from Japan in the late 1970s in the hands of Bill Willmont, then president of the Herman Molding Company, according to TPI’s history of the process. After purchasing the rights to the process and resigning from Herman Molding Company, Willmont started his own company in Harmony, Pennsylvania, and brought the V-Process with him. Taylor Pohlman, Inc., bought the rights to the process in 1985, with plans to start a new foundry in Orchard Park, New York. The company built a new facility—what is now TPi Arcade—in Arcade, New York, in 2001. Ligon Industries purchased the company in 2002.

In recent years, TPi Arcade has invested in automated processes, including robotic metal pouring, offline tooling staging areas, and modular molding stations, in an effort to speed parts to customers. The molding machine can handle parts from four customers at once. Molds in the robotic pouring process make for constant, accurate, repetitive pour rates and temperatures.

The company also upgraded its capabilities in September 2020 by  purchasing a Viking SHY4848 Spinner Hanger Y-Track shot blaster. The hanger enables easier loading and unloading of larger castings. The spinner turns the part to allow all sides to be blasted.

Along with these investments in manufacturing technology, the company emphasizes what Gerald Byrne, TPi Arcade’s general manager, called a “people first” culture.

“We are successful because of our employees. I believe that every employee at TPi has the capability to excel and be successful,” Byrne said. “My goal is to empower them to be innovative and think outside the box.”

TPi Arcade’s engineering services ensure that customers’ designs are manufacturable by the V-Process casting method, Depczynski said. “We review all designs. Normally, there are a lot of questions back and forth. We make recommendations to reduce costs.”

Depczynski explained that when casting a container, rather than making it in sheet metal, a customer may lower the cost by eliminating additional hardware, such as PEM mounting hardware that attaches components to the sheet metal. The idea is to cast a boss in, rather than buy extra hardware. Another step is to mold passageways for wires into the box rather than machining them post-process. “There are a number of things we can do to save the customer money,” Depczynski said. 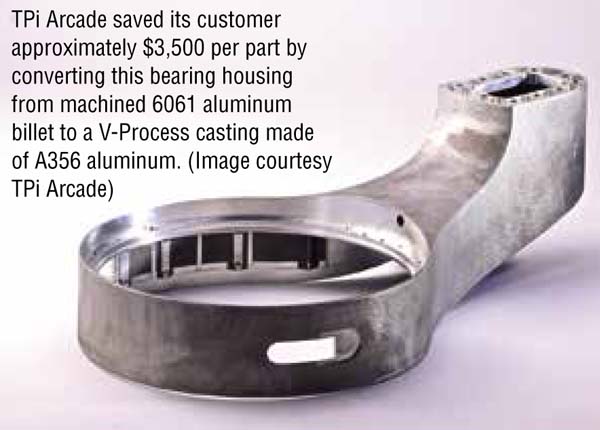 If an error in part production occurs, TPi uses relentless root cause corrective action tools to investigate the cause of the problem, enlisting people from engineering, production, and quality. It creates a clinic, located near key production and testing areas, to speed the process and improve communications around quality. This process involves figuring out the how and why of a problem part. The team uses the 5W2H analysis, which finds the root cause through questions. The questions include five Ws—who,  what, when, why, and where—and two Hs—how much? and how many?

Converting a Bearing Housing for Surgical Equipment to V-Process

In one case, a robotics customer had a successful FDA-approved part, a bearing housing for robotic surgical equipment. The part was expensive and complex, and its use in robotic surgery required near perfect precision. The customer’s main problem: The part was machined down to 6 pounds from an 80-pound billet of 6061 aluminum, creating about 90 percent scrap.

It was easy to see how V-Process casting would, at the very least,  save material. But to win the part conversion, TPi needed to overcome a challenge. The FDA had approved the part as machined from 6061 aluminum billet, which met defined elongation and strength profiles. TPi Arcade casts A356 aluminum.

“Some parts convert, some don’t. The part was designed and approved in billet, meaning there were not many opportunities for design concessions,” Depczynski said. “The material needed to have a higher safety factor and mechanical properties than traditional V-Process cast aluminum allows. Machining callouts were designed for 6061 billets. The challenge was to identify what key characteristics needed to remain as cast, versus machined.”

Elongation is how much will a part deform before it fails. “The more elongation you have, the more pliable the metal is, and it won’t snap. With patient-facing equipment already proven out at a certain elongation range, the customer couldn’t compromise on that requirement,” Depczynski said.

“Our engineering team worked that out,” he continued. “We figure we can do it, but we have to learn how. I come from the engineering world, and this is the hardest piece I ever worked on.”

Ingredients of A356 aluminum fall within certain specific proportions, although there is some leeway. The alloy has about 7 percent silicon, 0.3 percent magnesium, a maximum of 0.2 percent iron, and a maximum of about 0.1 percent zinc. There is also some flexibility for experimentation in casting the part. TPi engineers experimented on the chemistry and the casting to improve the outcome.

Depczynski said TPi Arcade engineers spent a week last year experimenting with casting times and the alloy mix to figure out how to get the most from A356. They wanted to reduce porosity in the finished metal. They wanted a stronger part. They wanted greater elongation. By changing certain parameters, they were able to recreate the elongation and strength of machined 6061 aluminum in a V-Process casting of A356 aluminum.

For example, a traditional heat treatment method specifies 12 hours of baking, followed by a water quench. The castings are then reheated to 440 degrees for three to four hours. TPi engineers developed parameters within those specifications to yield higher mechanical properties, Depczynski said.

Speaking about the shift from machining 6061 aluminum to casting A356 aluminum, Depczynski said TPi had to replicate the dimensional tolerances and mechanical properties of the billet material.

“We experimented. It was a fact-finding mission to see what was achievable. Is there a way to reduce porosity? We had to refine the chemistries, to tailor them for FDA approval. What it showed is we have the resources to push the envelope. We’re not cookie cutter.”

In the end, TPi’s engineers developed a more refined alloy to cast. They also “specialized the heat treatment process to produce mechanical properties that exceeded common industry published standards,” according to Depczynski.

“Engineering also worked with the customer and machining supplier to develop a process flow that yielded dimensional tolerances not normally achieved in a casting solution,” he said. “We had to hold one machining pattern to another within a circle. At one end, all the robotic features went through the casting from one end to the other, then drop down 18 inches to go into a human body.”

The finished bearing housing was 28 inches by 14.5 inches by 8.25 inches. TPi Arcade sent the customer the first part in a few weeks, and then worked out the entire manufacturing process specifics over three months. Converting the part to a casting saved the customer about $3,500 per part, an 80 percent cost reduction.

TPi’s work on the project earned the company first place in the casting conversion category of the American Foundry Society’s Casting of the Year competition for 2019.

Smart Design – Addressing The Challenges of IoT Design, and Five Tips for Streamlining PCB Thermal Design: A High-Level ‘How To’ Guide