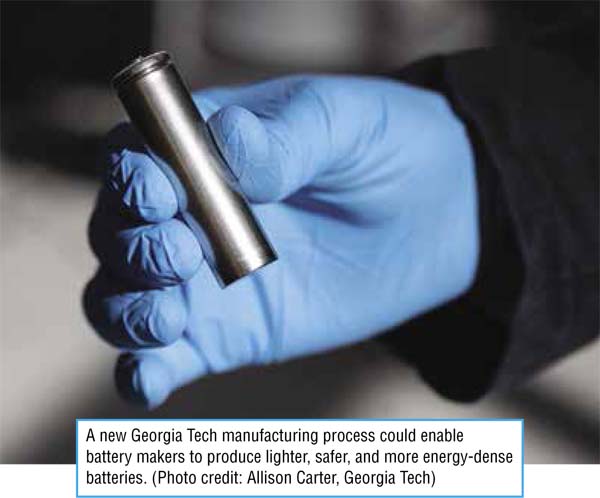 Materials science researchers at the Georgia Institute of Technology have developed a new manufacturing process that could enable battery makers to produce lighter, safer, and more energy-dense batteries. Another team of Georgia Tech researchers has uncovered an innovative way to turn 5G networks into a ‘wireless power grid’ for powering IoT devices.

The melt-infiltration technology developed by materials science researchers at the Georgia Institute of Technology uses electrolyte materials that can be infiltrated into porous yet densely packed, thermally stable electrodes. The one-step process produces high-density composites based on pressure-less, capillary-driven infiltration of a molten solid electrolyte into porous bodies, including multilayered electrode-separator stacks.

The new technique, reported March 8, 2021 in the journal Nature Materials, could allow large automotive lithium-ion (Li-ion) batteries to be made safer with 100 percent solid-state nonflammable ceramic, rather than liquid electrolytes, using the same manufacturing processes of conventional liquid electrolyte battery production. The patent-pending manufacturing technology mimics low-cost fabrication of commercial Li-ion cells with liquid electrolytes, but instead uses solid state electrolytes with low melting points that are melted and infiltrated into dense electrodes. As a result, high-quality multi-layered cells of any size or shape could be rapidly manufactured at scale using proven tools and processes developed and optimized over the last 30 years for Li-ion.

“Melt-infiltration technology is the key advance. The cycle life and stability of Li-ion batteries depend strongly on the operating conditions, particularly temperature,” Georgia Tech graduate student Yiran Xiao explained. “If batteries are overheated for a prolonged period, they commonly begin to degrade prematurely, and overheated batteries may catch on fire. That has prompted nearly all electric vehicles (EVs) to include sophisticated and rather expensive cooling systems.” In contrast, solid-state batteries may only require heaters, which are significantly less expensive than cooling systems.

Yushin and Xiao are encouraged by the potential of this manufacturing process to enable battery makers to produce lighter, safer, and more energy-dense batteries.

“The developed melt-infiltration technology is compatible with a broad range of material chemistries, including so-called conversion-type electrodes. Such materials have been demonstrated to increase automotive cell energy density by over 20 percent now and by more than 100 percent in the future,” said co-author and Georgia Tech research scientist Kostiantyn Turcheniuk, noting that higher density cells support longer driving ranges. The cells need high-capacity electrodes for that performance leap. 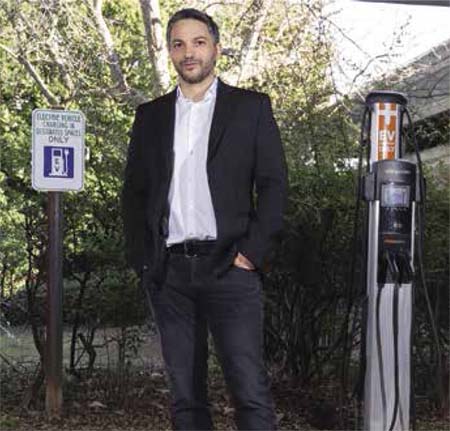 Georgia Tech’s technique is not yet commercially ready, but Yushin predicts that if a significant portion of the future EV market embraces solid-state batteries, “This would probably be the only way to go,” since it will allow manufacturers to use their existing production facilities and infrastructure.

“That’s why we focused on this project—it was one of the most commercially viable areas of innovation for our lab to pursue,” he said.

Battery cell prices hit $100 per kilowatt hour for the first time in 2020. According to Yushin, they will need to drop below $70 per kilowatt hour before the consumer EV market can fully open. Battery innovation is critical to that occurring.

The Materials Science lab team currently is focused on developing other electrolytes that will have lower melting points and higher conductivities using the same technique proven in the lab.

Yushin envisions this research team’s manufacturing advance opening the floodgates to more innovation in this area.

“So many incredibly smart scientists are focused on solving very challenging scientific problems, while completely ignoring economic and technical practicality. They are studying and optimizing very high-temperature electrolytes that are not only dramatically more expensive to use in cells but are also up to five times heavier compared with liquid electrolytes,” he explained. “My goal is to push the research community to look outside that chemical box.”

In addition to Yushin, Xiao and Turcheniuk, co-authors included Aashray Narla, Ah-Young Song, Alexandre Magasinski, Ayush Jain, Sheirley Huang, and Haewon Lee from Georgia Tech, and Xiaolei Re from both Georgia Tech and Chongqing Technology and Business University in China.

This work was mostly supported by Sila Nanotechnologies Inc., a Georgia Tech startup, with characterization performed at the Materials Characterization Center at Georgia Tech. Any opinions, findings, and conclusions or recommendations expressed in this material are those of the authors and do not necessarily reflect the views of the sponsoring organization.

Gleb Yushin is co-founder, CTO, and a stockholder of Sila. Yushin is entitled to royalties derived from Sila’s sale of products related to the research described in this paper. This study could affect his personal financial status. The terms of this arrangement have been reviewed and approved by Georgia Tech in accordance with its conflict of interest policies.

Anne Wainscott-Sargent is a research news writer with Georgia Institute of Technology. 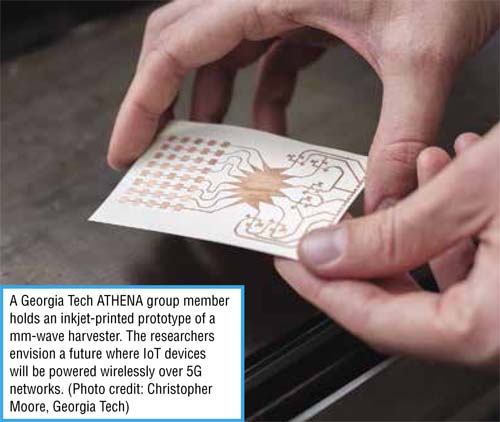 A Rotman lens-based ‘rectenna’ is capable of millimeter-wave harvesting at 28-ghz with high efficiency from all directions for the first time.

ATLANTA—Researchers at the Georgia Institute of Technology have uncovered an innovative way to tap into the over-capacity of 5G networks, turning them into “a wireless power grid” for powering Internet of Things (IoT) devices that today need batteries to operate.

The Georgia Tech inventors have developed a flexible Rotman lens-based rectifying antenna (rectenna) system capable, for the first time, of millimeter-wave harvesting in the 28-GHz band. (The Rotman lens is key for beamforming networks and is frequently used in radar surveillance systems to see targets in multiple directions without physically moving the antenna system.)

But to harvest enough power to supply low-power devices at long ranges, large aperture antennas are required. The problem with large antennas is they have a narrowing field of view. This limitation prevents their operation if the antenna is widely dispersed from a 5G base station.

“We’ve solved the problem of only being able to look from one direction with a system that has a wide angle of coverage,” said senior researcher Aline Eid in the ATHENA lab, established in Georgia Tech’s School of Electrical and Computer Engineering to advance and develop novel technologies for electromagnetic, wireless, RF, millimeter-wave, and sub-terahertz applications.

The findings were reported in the January12, 2021 issue of the journal Scientific Reports.

The FCC has authorized 5G to focalize power much more densely compared with  previous generations of cellular networks. While today’s 5G was built for high-bandwidth communication, the high-frequency network holds rich opportunity to “harvest” unused power that would otherwise be wasted.

“With this innovation, we can have a large antenna, which works at higher frequencies and can receive power from any direction. It’s direction-agnostic, which makes it a lot more practical,” noted Jimmy Hester, senior lab advisor and the CTO and co-founder of Atheraxon, a Georgia Tech spinoff developing 5G radio-frequency identification (RFID) technology. 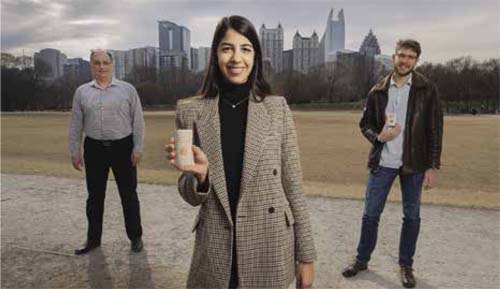 With the Georgia Tech solution, all the electromagnetic energy collected by the antenna arrays from one direction is combined and fed into a single rectifier, which maximizes its efficiency.

“People have attempted to do energy harvesting at high frequencies like 24 or 35 Gigahertz before,” Eid said, but such antennas only worked if they had line of sight to the 5G base station; there was no way to increase their angle of coverage until now.

Operating just like an optical lens, the Rotman lens provides six fields of view simultaneously in a pattern shaped like a spider. Tuning the shape of the lens results in a structure with one angle of curvature on the beam-port side and another on the antenna side. This enables the structure to map a set of selected radiation directions to an associated set of beam-ports. The lens is then used as an intermediate component between the receiving antennas and the rectifiers for 5G energy harvesting.

This novel approach addresses the tradeoff between rectenna angular coverage and turn-on sensitivity with a structure that merges unique radio frequency (RF) and direct current (DC) combination techniques, thereby enabling a system with both high gain and large beamwidth.

This robust system may open the door for new passive, long-range, mm-wave 5G-powered RFID for wearable and ubiquitous IoT applications. The researchers used in-house additive manufacturing to print the palm-sized mm-wave harvesters on a multitude of everyday flexible and rigid substrates. Providing 3D and inkjet printing options will make the system more affordable and accessible to a broad range of users, platforms, frequencies, and applications.

“The fact is 5G is going to be everywhere, especially in urban areas. You can replace millions, or tens of millions, of batteries of wireless sensors, especially for smart city and smart agricultural applications,” said Emmanouil (Manos) Tentzeris, Ken Byers Professor in Flexible Electronics in the School of Electrical and Computer Engineering.

Tentzeris predicts that power as a service will be the next big application for the telecom industry, just as data overtook voice services as a major revenue producer. The research team is most excited by the prospect of service providers embracing this technology to offer power on demand “over the air” (OTA), eliminating the need for batteries.

“I’ve been working on energy harvesting conventionally for at least six years, and for most of this time, it didn’t seem like there was a key to make energy harvesting work in the real world, because of FCC limits on power emission and focalization,” Hester said. “With the advent of 5G networks, this could actually work, and we’ve demonstrated it. That’s extremely exciting — we could get rid of batteries.”

This work was supported by the Air Force Research Laboratory and the National Science Foundation (NSF) – Emerging Frontiers in Research and Innovation program. The work was performed in part at the Georgia Tech Institute for Electronics and Nanotechnology, a member of the National Nanotechnology Coordinated Infrastructure (NNCI), which is supported by the NSF (Grant ECCS-1542174).

Anne Wainscott-Sargent is a research news writer with Georgia Institute of Technology.

A Powerful 1-2-3 Punch for American Manufacturing