Wind energy researchers at Sandia National Laboratories studied a novel low-cost carbon fiber, not yet commercially available, and found that it performed better in key cost-specific areas than commercial materials currently used in wind turbine blades. Also at Sandia, researchers are now using a custom-built wind turbine emulator that can help determine the viability of using wind turbines as a source of distributed energy in remote areas. 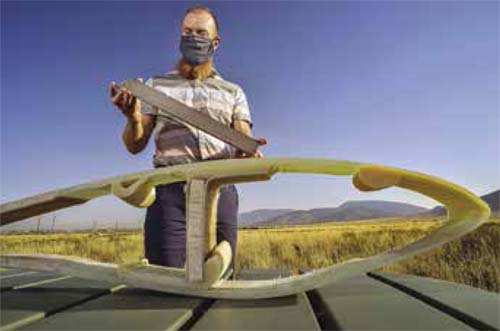 ALBUQUERQUE, N.M. — A new carbon fiber material could bring cost and performance benefits to the wind industry if developed commercially, according to a study led by researchers at Sandia National Laboratories.

Wind blades containing carbon fiber weigh 25 percent less than ones made from traditional fiberglass materials. That means carbon fiber blades could be longer than fiberglass ones and, therefore, capture more energy in locations with low wind. A switch to carbon fiber could also extend blade lifetime because carbon fiber materials have a high fatigue resistance, said Brandon Ennis, a wind energy researcher at Sandia Labs and the principal investigator for the project.

The project is funded by DOE’s Wind Energy Technologies Office in the Office of Energy Efficiency and Renewable Energy. Partners on the project include Oak Ridge National Laboratory and Montana State University.

Of all the companies producing wind turbines, only one uses carbon fiber materials extensively in their blade designs. Wind turbine blades are the largest single-piece composite structures in the world, and the wind industry could represent the largest market for carbon fiber materials by weight if a material that competed on a cost-value basis to fiberglass reinforced composites was commercially available, said Ennis.

However, the wind and carbon fiber industries do not currently overlap. The wind industry designs wind turbine blades using only commercially available materials, and the carbon fiber manufacturers face a hurdle to innovation due to high capital costs associated with introducing a new production line for the wind industry.

Cost is the main consideration during component design in the wind industry, yet turbine manufacturers also have to build blades that withstand the compressive and fatigue loads that blades experience as they rotate for up to 30 years. Ennis and his colleagues wondered if a novel low-cost carbon fiber developed at Oak Ridge National Laboratory (ORNL) could meet performance needs while also bringing cost benefits for the wind industry.

The material starts with a widely available precursor from the textile industry that contains thick bundles of acrylic fibers. The manufacturing process, which heats the fibers to convert them to carbon, is followed by an intermediate step that pulls the carbon fiber into planks. The plank-making pultrusion process creates carbon fiber with high performance and reliability needed for blade manufacturing and also allows for high production capacity.

When the research team studied this low-cost carbon fiber, they discovered it performed better than current commercial materials in terms of cost-specific properties of most interest to the wind industry.

The study was funded by the U.S. Department of Energy Wind Energy Technologies Office.

The novel carbon fiber even reduced predicted materials costs when compared to fiberglass for a land-based turbine design, due to the improved fatigue resistance. Other results from using the novel carbon fiber in blade design, such as decreased weight and increased fatigue lifetime, could influence the entire turbine design in ways that bring additional cost and performance benefits too, Ennis said.

“While the optimal carbon fiber for the wind industry does not exist on the market yet, this new textile carbon fiber has performance characteristics that have higher value for the specific loads that a wind turbine experiences,” Ennis said. “Developing this material commercially could enable the benefits of carbon fiber materials to be realized more broadly by the wind industry and lower the overall cost of wind energy.” 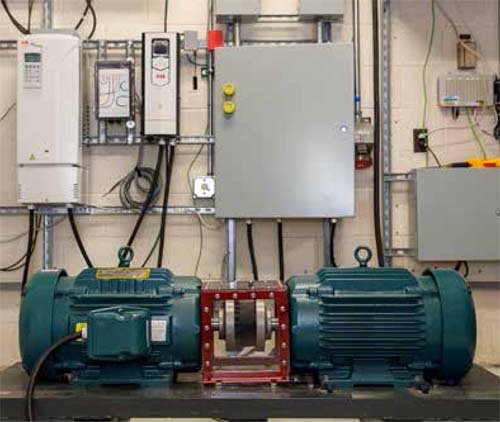 The scaled down turbine motor is connected to software that will allow the Sandia National Laboratories team to emulate a variety of conditions and tackle the challenges of using wind power as part of a microgrid for remote communities. (Photo by Bret Latter)

ALBUQUERQUE, N.M. — Researchers at Sandia National Laboratories have a new tool that allows them to study wind power and see whether it can be efficiently used to provide power to people living in remote and rural places or even off the grid, through distributed energy.

A new, custom-built wind turbine emulator has been installed at Sandia’s Distributed Energy Technologies Laboratory. The emulator, which mimics actual wind turbines at Sandia’s Scaled Wind Farm Technology Site near Lubbock Texas, will be used to study how wind farms behave under multiple weather conditions and load demands, and if they can be efficiently used as a source of distributed energy for consumers who live near the farms, according to Brian Naughton, a researcher with Sandia’s Wind Energy Technologies program.

Unlike traditional wind farms that feed energy to grid-connected transmission lines, wind turbines used for distributed energy are close to, or even directly connected to, the end user or customer, said Naughton. This is especially important for users who are in remote areas or who are off the main electrical grid.

“Right now, most wind generated power is just sent out on transmission lines to customers hundreds of miles away and can be affected by a wide variety of disruptions,” said Naughton. “Being able to test how wind turbines react to different and varying wind and weather conditions, we can help determine the viability of having generation take place closer to homes, schools, and businesses.”

Determining the viability of using wind turbines as a source of distributed energy is important due to the potential impact it could have on providing electricity to remote, island communities that exist largely off the main electric grid, said Rachid Darbali-Zamora, a researcher with Sandia’s Renewable Energy and Distributed Systems Integration program.

“We’re looking at finding solutions to challenges faced by parts of the country that cannot be consistently powered by a traditional electric grid, such as remote communities in Alaska or islands that have experienced crippling devastation due to hurricanes,” said Darbali-Zamora. “Adding wind as a distributed energy source, we are potentially solving some big challenges that are faced regarding the utilization of microgrid technology.”

By using the resources available at the Distributed Energy Technologies Laboratory, researchers will be able to exactly replicate wind, weather, and load demand conditions at the Texas site, according to Naughton. 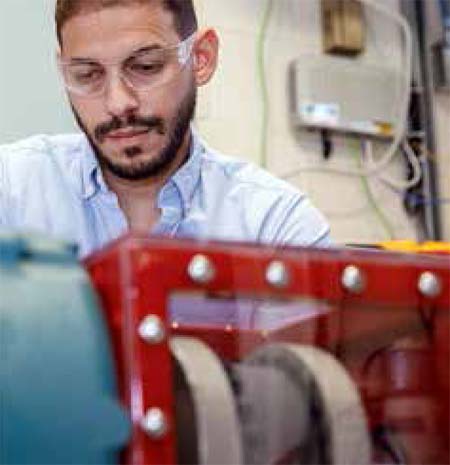 Rachid Darbali-Zamora examines Sandia National Laboratories’ new wind turbine motor, which will allow the distributed energy team to study how wind farms will behave under a variety of conditions and in different locations. (Photo by Bret Latter)

“Because the Distributed Energy Technologies Lab is so configurable, we’re able to conduct tests and simulations that are not feasible or safe to do on the actual electric grid or that we might have to wait days or weeks for conditions to be right at the wind farm site,” said Naughton. “Just like the lab can simulate weather and load conditions for solar photovoltaics and battery testing, we can now do the same thing for wind generation.”

The emulator consists of a scaled-down wind turbine motor and uses much of the same hardware and software that control actual turbines. The motor is connected to the lab’s emulator system, allowing researchers to operate the “virtual” turbine under different conditions, Naughton said.

“Because we’ve created an emulator that is as close to the real thing as possible, we can rapidly and cost-effectively go from concept to a solution to the challenges communities and utilities face regarding distributed energy generation,” said Naughton. “We also believe that the research we’re going to be conducting will have an overall benefit to grid resilience and stability, which affects everyone.”

In the laboratory setting, a model mimicking the Texas wind farm site’s electrical distribution system is run in real-time, generating approximately 15 kilowatts of electricity. Power from the wind turbine emulator is introduced to the simulated wind farm, influencing its behavior. In turn, responses, such as voltage variations, affect the wind turbine emulator behavior. This also allows the emulator to interact with other physical devices inside the Distributed Energy Technologies Lab, such as solar photovoltaic inverters and protection systems, said Sandia’s Jon Berg, with the Wind Energy Technology’s program.

“Wind as strong as 25 meters per second interacting with the rotor blades is represented by a motor drive that we can program to duplicate how the rotor speed would respond,” said Berg. “The torque being created then causes the emulator to produce electricity, just like the actual turbine does, as the turbine control system commands the power converter and generator to resist the input torque.”

Naughton, Darbali-Zamora and Berg all believe that the ability to apply different control schemes to the emulator and simulated environments in real time will help identify obstacles that can arise during deployment in the field, such as system communications latencies or other configuration challenges. Being able to address these in a real-time test environment will save time and money and increase efficiency of field deployment.

Funded by the U.S. Department of Energy’s Wind Energy Technologies Office, the new wind turbine emulator at Sandia is part of the Microgrids, Infrastructure Resilience, and Advanced Controls Launchpad, a collaboration between Sandia, the Idaho and Pacific Northwest national laboratories, and the National Renewable Energy Laboratory. Researchers use the launchpad to advance wind-hybrid distributed energy systems to provide stability, flexibility, security, and resilience to distribution systems and microgrids.