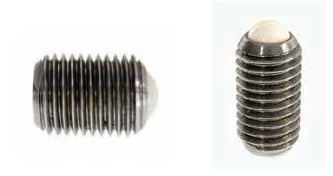 The pace of medical product innovation is accelerating, and many of the advances are aimed at improving surgical outcomes. From 3D digital infrared fluorescence to augmented reality systems and machine vision technologies that streamline surgical workflows, new technologies are allowing surgeons to  accurately and efficiently execute their preoperative plans while ensuring patients’ safety.

What surgeons and patients don’t often see is the precision engineering, custom manufacturing, and quality control required to produce the specialized parts and assemblies that are vital to life-enhancing and life-saving technologies. When a parts manufacturer meets critical requirements for a surgical instrument component, it’s an important—even if largely unnoticed—achievement.

Vlier Products, a business unit of Hutchinson Aerospace and Industry, has accomplished such a feat. The Hopkinton, Massachusetts-based company manufactures a variety of components—including knurled knob plungers, ball detent pins, and leveling devices—for the medical industry. Its specialties include ball plungers, spring-loaded devices that are often specified for use in indexing, locating, locking, or positioning.

“Typically, a ball plunger will comprise three or four different components,” said Russ Mitchell, national sales manager for Vlier Products, in a phone interview. “What you’re trying to do is control and package the energy developed from a small compression spring.”

Vlier specializes in custom parts and works according to its customers’ design criteria to  develop the part specifically for their application. Some customers come to Vlier with a specific application, attempting to use a standard off-the-shelf product. But for many applications, a standard product doesn’t meet their needs. Some customers may be interested in a specific end force or a specific material. Others might want to tweak a product to meet their needs for a smaller or larger part or a different thread size.

One medical OEM enlisted Vlier to develop a specialized ball plunger that would improve the safety and efficiency of back surgeries to correct vertebral compression fractures (VCFs). Intended for use in surgical instruments, the ball plunger was designed to prevent a tool from accidentally damaging the spine during surgery. Vlier, known for its custom part manufacturing services, heartily embraced its role as contract manufacturer for its customer’s design team on the project.

In this case, a vertebral augmentation procedure, the ball plunger would provide a positive lock while resting in a V-groove during the procedure.

“If one of the instruments gets up into a difficult space, the plunger would pop out of that V-groove to relieve a set amount of torque in the procedure, so as not to damage or cause more damage to the spine,” Mitchell said.

The ball plunger is a compact package, weighing about 0.0126 pound and measuring under an inch in length, according to Brionne Bean, an engineering quality manager who worked on the project. On the inside of the body, a rivet essentially “cradles” the ball of the plunger and provides a smooth surface for the plunger to actuate, Bean said.

The part is installed into a handle, where the spring plunger is put under a preload. “As the device would rotate, it would apply more pressure,” Bean said. “And once it hit a certain pressure, or certain torque value, it would disengage, essentially, a tool, and keep it from actuating.”

Because Vlier’s work on the project is subject to a nondisclosure agreement, both Bean and Mitchell said they were limited in what they could reveal, including the name of the customer and its device, and specifics about how it is used. But Mitchell did say that the whole premise of the surgical tool used in the procedure hinges on the ball plunger. “Without the ball plunger, there is no tool,” he said.

The development of the design began in 2007, according to Mitchell. After about four years of development, a final design was completed.

“It required a lot of testing and numerous qualifications, so it took quite a bit of time, from both sides, from an engineering standpoint,” Mitchell said. “We would build parts and do short runs, maybe a hundred pieces, and those would go out into the field and be tested and improved.”

On this project, the customer was looking to substitute new materials in the part to ensure they were compliant with FDA guidelines. Vlier’s ball plunger mechanism is a four-part assembly, in which the threads of the part are made of stainless steel. The inside head includes a rivet to help control the actuation of the spring plunger, which is also made from stainless steel. A ceramic material was chosen for the ball, Bean said.

“One of the requirements for this part that was outside of our standard [products] was the ceramic ball,” Bean noted. Another was the surface finish on the inside, which Bean said was extremely smooth. “It allowed one smooth application or repeatability in the application, but also prevented galling,” he said.

“I think our biggest challenge was making sure that we were achieving that surface finish from one end of the part to the opposite end, so that it would actuate smoothly throughout the whole actuation of the part,” Bean said.

The precision design of the spring made it possible to meet the torque values that the customer was trying to achieve. All design features of the ball plunger, including the uniqueness of the surface finish and the spring rate, were motivated by the need to hit a very narrow target of torque (5 inch-pound). Vlier had to not only hit that target, but do it repeatedly, Mitchell said.

“We had to refine the product to a very high quality type of product. We do this in several different applications, including aerospace applications that we have to build to very precise specifications,” he said.

No design tradeoffs were made in the course of the development, Bean said, because “everything was in development to make the product better.” “What we were able to develop was a far superior product than what we offer as a COTS (commercial off-the-shelf) item,” he said.

Before the ball plunger was developed, surgeries to correct vertebral compression fractures (VCFs) were done by “feel and touch,” Mitchell said. Now, surgeons can use a precision engineered tool with a built-in mechanism to prevent spinal damage.

“There was no safety around it before. The tool that’s been designed provides better outcomes for the patient, and this is a much safer procedure than it was before.”

Vlier’s engineering team takes pride in doing a good job of solving any development or manufacturing issues that arise, Bean told D2P. In the medical industry today, product development is so dynamic that medical devices seem to be changing “on a month by month basis,” he said.

Mitchell said companies in the medical industry often contact Vlier with requests for parts used in applications ranging from surgical instruments and clamps, to cardiac defibrillators and diagnostic imaging machines.

“With Brionne and his team, we’ve got the flexibility to meet a lot of different standards in the medical industry, regardless of what they are. Whether it be packaging or handling of components, there are certain materials that can’t touch a medical-grade component. We’ve got those capabilities.”

Today, surgeons can use robotic digital microscopes equipped with 3D digital infrared fluorescence to get a better view of cerebral vascular blood flow during surgery. Aesculap, Inc., a healthcare company that develops advanced technologies for neurosurgery and general surgery, received 510(k) clearance from the U.S. Food and Drug Administration (FDA) in February to use DIR800 3D digital infrared fluorescence with its Aesculap Aeos Robotic Digital Microscope. 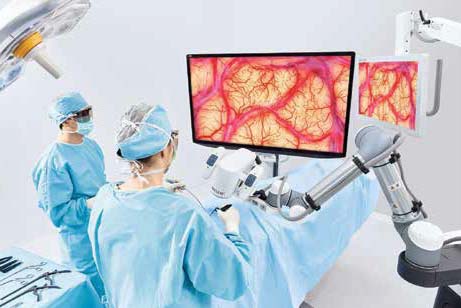 Surgeons using the accessory can assess cerebral aneurysm and vessel branch occlusion, and patency in neurosurgery. They can also visually assess intraoperative blood flow and vessel patency in bypass neurosurgical procedures, Aesculap said in a release announcing the FDA clearance.

Here’s how it works. When used with DIR800, the Aesculap Aeos Robotic Digital Microscope produces excitation light that illuminates the fluorescence properties of indocyanine green (ICG), a dye used for medical diagnostic imaging. That fluorescence signal depicts the distribution of the infrared dye in the patient’s blood vessels during surgery, according to Aesculap (www.aesculapusa.com).

“DIR800 combines infrared fluorescence technology with 3D digital visualization while also allowing the surgeon and OR team to share the same high-quality live view and slow motion playback on multiple 3D 4K monitors,” Aesculap said in the release. “Backlight illumination aids visualization of nearby non-fluorescing structures without the need to switch back to white light.”

Another newly available technology is an augmented reality (AR) system that can simplify hip replacement surgery by allowing surgeons to focus their vision on the patient, instead of looking to computer screens for internal views of the patient’s anatomy.

In January of this year, Surgical Planning Associates (SPA) received U.S. FDA 501(k) clearance for its HipInsight™ System (www.hipinsight.com), an augmented reality guidance platform for total hip replacement. Stephen B. Murphy, M.D., founder of SPA, is reported to have performed the first total hip arthroplasty using the HipInsight system in February. The surgery, performed at North Atlantic Surgery Suites in Salem, New Hampshire, is the first of its kind to be performed using an augmented reality system, according to SPA.

The HipInsight surgical guidance platform includes a head-mounted device that allows surgeons to view real-time 3D models of the patient’s internal anatomy, as well as any implants or instruments that may be inside the body, through Microsoft HoloLens 2™ augmented reality glasses. It combines cloud-based preoperative planning and virtual interoperative guidance, enabling surgeons to be “more precise in the most critical aspects of the operation,” according to the release. 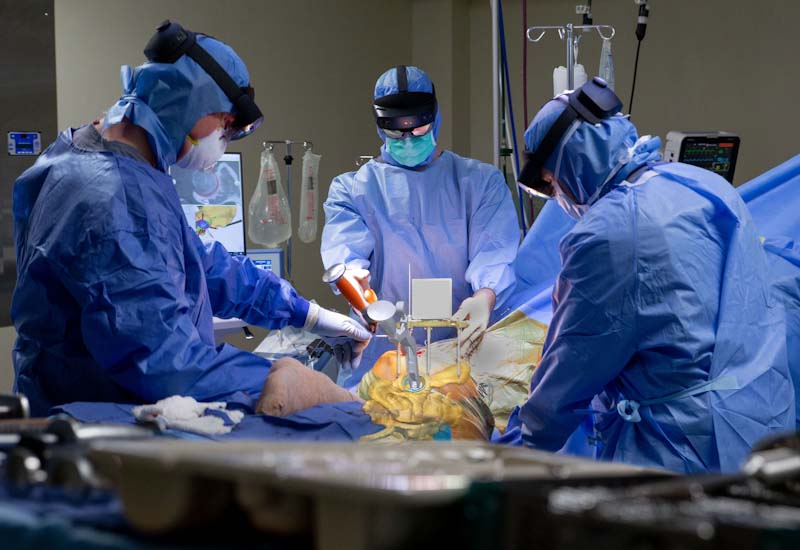 The HipInsight surgical guidance platform includes a head-mounted device that allows surgeons to view real-time 3D models of the patient’s internal anatomy, as well as any implants or instruments that may be inside the body, through Microsoft HoloLens 2™ augmented reality glasses. (Surgical Planning Associates/PR Newswire photo)

“Traditional navigation systems, robotics, and interoperative imaging provide information on flat screens outside the surgeon’s view of the patient, leaving the process disjointed and awkward,” Murphy said in a company release. “The HipInsight system enables surgeons to stay focused on the patient, projecting holograms on AR glasses that effectively give them ‘X-ray vision,’ so that surgeons can see what they need to see, when they need to see it, right inside the patient’s body.”

Carl T. Talmo, M.D., director of arthroplasty research at New England Baptist Hospital (NEBH) in Boston, is reported to have used SPA’s HipInsight System to perform the first-ever AR-guided anterior total hip replacement earlier this year at NEBH. Talmo was assisted by Chris Sambaziotis, M.D., MPH, the co-director of outpatient arthroplasty at NEBH, according to a release from SPA.

“The preoperative plan provided by the HipInsight System is an amazing 3-dimensional rendering that I found very helpful in planning and identifying the complexities in this case, which involved a patient with a significant degenerative scoliosis,” Talmo said in a release. “Intra-operatively, the augmented reality system allowed for an accurate execution of our plan, as I was able to perfectly visualize our plan projected into the patient’s anatomy.”