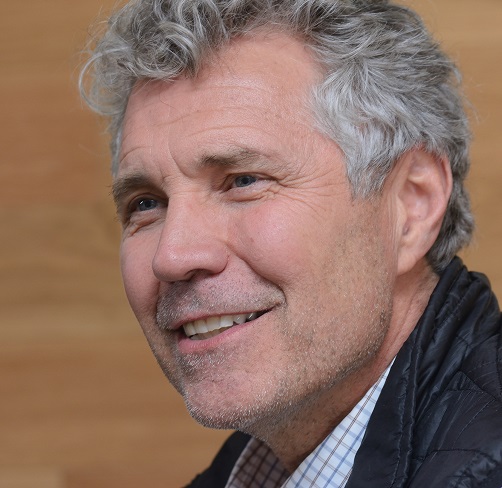 Paul Steck’s curiosity and openness to talking with people outside his company have led Exothermic Molding to new opportunities for growth.

Reaction injection molding (RIM) is a process that mixes two precisely metered chemicals under pressure, yielding a low-viscosity liquid that is then injected into a mold to form a thermoset polymer part. The low-pressure, low-temperature process is known for its design flexibility, enabling molders to make complex parts with varying wall thicknesses and to encapsulate structural components for electronics, batteries, or antennas.

Despite these benefits, RIM has been limited by a lack of advancements in polyurethane, the material most often used by reaction injection molders, according to Paul K. Steck, president of Exothermic Molding, Inc., in Kenilworth, New Jersey. But recent innovations are beginning to change that.

One example is a high-performance thermoset resin from Materia that is breathing new life into RIM by opening up applications that require advanced materials. The resin, called Proxima®, is enabled by Nobel Prize-winning Grubbs Catalyst technology.

“It’s a material that’s superior to anything we’ve been able to offer in the past,” said Steck in an interview with D2P. “It’s a very durable material, in terms of impact strength and chemical resistance, and at high temperatures.”

Exothermic Molding, a manufacturer of reaction injection-molded parts, is focused on seizing the opportunities presented by Proxima. The company, which employs nearly 30 people, is using Proxima to manufacture large, complex parts that require higher performance than polyurethane, polyester, epoxy, or vinyl resins can deliver.

“By becoming an early adopter and investing in new equipment to process this material, we have been able to open up new verticals, including robotics, military, fitness equipment, and even space exploration,” Steck wrote in “Innovate Everything: Your Products, Your Processes, Your People.” The article was published last winter in the New Jersey Manufacturing Extension Partnership’s quarterly newsletter, “Manufacturing Matters.” 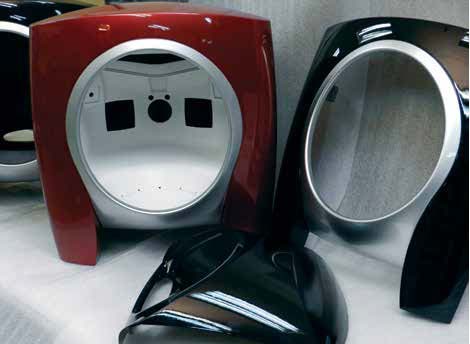 Despite its light weight, Proxima is prized for its toughness. In a video on Exothermic’s website, Steck lauded the toughness and durability of Proxima. The video shows a Proxima molded part remaining intact after being pounded by a sledgehammer and driven over by a car.

“We even hit the part with a tamping bar, and you see that the bar broke before the parts broke,” Steck said in the video. “We think this is an important advancement for material properties in reaction injection molding.”

Depending on their use, Proxima parts can be molded with properties ranging from superior impact strength to excellent corrosion resistance and dielectric properties. Properties like high impact strength and resistance to crack propagation make Proxima well-suited for automotive and transportation uses. Other properties, such as superior dielectric, thermal stability, and mechanical characteristics, are compatible with electronics and electrical applications.

Proxima is also reported to perform well in high pressure, high temperature (HPHT) environments, a valuable characteristic for the oil and gas industry. While its durability and thermal insulation properties are a good match for infrastructure projects, it is also said to provide excellent longevity, structural integrity, and resistance to moisture, all of which are useful in industrial products. Wind energy is another potential market because the material can be used to make longer, more durable blades with “increased energy capture area at reduced costs,” according to Exothermic.

“People are always interested in new things,” Steck said. “So it makes it a lot easier to introduce Exothermic to designers and manufacturers in the marketplace because you have new materials.”

Energized by customers’ growing interest in Proxima, Exothermic is celebrating its 50th anniversary as a business this year. The company manufactures reaction injection-molded plastic parts for core customers in the medical device, laboratory measurement, and defense industries. During the COVID-19 pandemic, Exothermic has supported critical businesses by making parts for medical devices used in COVID testing. 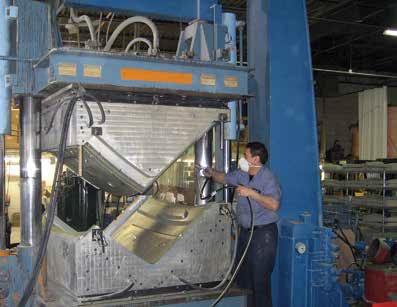 “People over the years were interested in acquiring my company,” Steck said. “I was never trying to sell, but I would entertain the interest just because I was curious. And that’s how I ended up getting involved with Proxima.”

Steck is part of a manufacturing family that began a couple of generations ago. Both of his grandfathers completed the same apprenticeship program in Germany and came to the U.S. as teenagers around 1920, he said. After working in manufacturing jobs for a period of time, they started their own companies.

“I grew up in the family business and ended up, as a kid, being pulled out of bed and dragged into work on Saturdays,” Steck said. “So I got my hands involved at an early age.”

Fast forward several decades, to a time when international trade tensions, supply chain disruptions, and critical shortages of parts and materials are creating significant hurdles for manufacturing companies. Steck is acutely aware that market forces and technology advancements are reinforcing the need for American manufacturers to figure out new ways to grow. This prompted Steck, who steered Exothermic Molding to its best sales year ever in 2020, to share some of his insights on business growth and innovation.

In his article, “Innovate Everything: Your Products, Your Processes, Your People,” Steck offers advice rooted in his decades of operating a successful contract manufacturing company. “Staying the same is a recipe for getting smaller,” Steck wrote. But from the moment a ground-breaking process or technology is conceived, the path to real-world use and application of that innovation can take surprising turns. As Steck points out, those who end up applying a superior process are not always the people who had first crack at it.

“The actual assembly line process used by the Japanese automakers appeared to be both more efficient and more effective than the one invented by Henry Ford and still used by American automakers up until the 1970s,” Steck wrote. “The big surprise came when the Americans inquired how the process originated. In fact, the brains behind the process was none other than an American named W. Ernst Deming. American industry had, up to that point, largely ignored Deming’s work.”

To make the most of potential opportunities for growth, manufacturers should always be looking for new solutions, Steck said. Beyond taking the pulse of their own teams, they can widen their horizons by talking with people on the outside—competitors, customers, suppliers, and those with technologies that complement theirs. By reaching out in this way, they can learn about—and gauge the demand for—new materials, processes, or technologies that may be emerging.

“Take the time to visit your suppliers, your competitors, and those with complementary technologies,” Steck wrote. “Sniff around, ask questions, probe and press them for information. Look for win-win relationships for collaboration when you can’t provide all of the solutions your customers require.”

As Steck can attest, there could be an R&D team somewhere that’s developing a new material with properties that can suddenly expand a manufacturer’s markets.

Steck said he became friends with a competitor who later left the company. His friend ended up moving to the West Coast to work for another company that had developed a new material—one with clear potential to expand the company’s client base into new industries. One day, he contacted Steck about the new material.

“He said, ‘We have this new material and we’re looking for people who might be interested in offering it to their customers,’” Steck recalled. The new material was Proxima.

“There were plenty of reasons not to [get involved]. It was highly odiferous and there wasn’t a marketplace where you could buy the equipment to process it,” Steck said. “There were learning curves and uncertainties, and the investment of significant amounts of money in equipment to do this. But we decided to do it.”

Exothermic’s engineers helped set the stage for growth, playing a key role in the research and development of a processing machine for the Proxima material. While doing so, they learned the ins and outs of processing the material and absorbed the nuances of building the molds.

“There are some new things on the molds, like temperature manifolds, and there’s a temperature differential of about 40 degrees Fahrenheit between the cavity and the core,” Steck said. “There are also certain polishing requirements.”

An Opportunity for Innovation

Mold building is a highly valued capability that can give parts manufacturers a leg up on competitors who don’t provide the service in house. But the widespread skills shortage currently plaguing American manufacturers is making it difficult for them to keep this specialty alive in their own facilities. As Steck assessed the challenge of finding qualified mold builders, he saw an opportunity for innovation.

He and his team recognized the need for a technology that could build molds differently for the parts they make—large, complex parts used in the medical device, laboratory measurement, and defense industries. That led them to begin developing an innovative Additive Hybrid Mold Building technology, also known as 3D Hybrid Technology.

The 3D Hybrid technology enables Exothermic to combine the advantages of additive and subtractive manufacturing during the mold-making process. Its team can add metal via 3D printing and subsequently remove portions of it by CNC machining. Steck said the technology could help his team build molds faster and more cost effectively, with fewer tool and die man-hours needed.

“We’re trying to develop this Additive Hybrid Mold Building technology, and it’s  going slowly. But we’re still working at it, and we think that there will be an opportunity,” Steck told D2P. “We’ve built a test mold with it, and it might be the first ever additive hybrid reaction-injection mold that’s been made. We’ve had reasonable success with it, but we’re still experimenting.”

“When the urethanes react, they create internal pressures of about 100 pounds per square inch,” Steck noted. “We need to have clamping pressures that will sustain those pressures. It doesn’t sound like much until you have a mold that might be 5 square feet of surface area—then you have a lot of tonnage. The Proxima doesn’t create any internal pressures at all.”

Another technology that is serving Exothermic well is a cloud-based ERP (enterprise resource planning) software system that enables team members to better manage workflows, resulting in shorter lead times for customers. The ERP system helps with scheduling and costing, allowing the firm to take on more work and still reduce lead times. “We were up around 12- to 16-week lead times, and now we’re down to three weeks,” Steck said.

Steck added that having the software alone is not enough, just as acquiring state-of-the-art equipment—like a CNC machining center—doesn’t guarantee success. You still need skilled operators.

“When we got someone on our staff who understood the software, and we made that person in charge of scheduling, that’s when things really started improving,” he said. “You really need to have the right people in place.”

Steck’s curiosity and openness to talking with people outside of his own company have led him to opportunities he hadn’t seen coming. It was because he hasn’t shied away from meeting people and talking about manufacturing that the opportunity to get involved with Proxima came along, he said.

“It’s important to be social in business. When you’re in manufacturing, you tend to put your head down and make things. You don’t  necessarily look around very much—and that’s how we ended up getting involved with Proxima. It was just because of being open to having conversations with outside parties.”

Is Your Medical Part a Candidate for Metal Injection Molding?