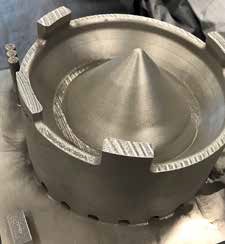 GE used additive manufacturing to produce this sump cover for the U.S. Air Force, which granted GE airworthiness qualification in under a year. The cobalt chrome sump cover was produced on a GE Additive Concept Laser M2 machine at the GE Additive Technology Center, as part of a collaboration with The U.S. Air Force’s Rapid Sustainment Office. (Photo courtesy GE Additive)

CINCINNATI, Ohio—GE Aviation recently received Engineering Change Proposal (ECP) approval from the U.S. Air Force (USAF) for an F110 additively manufactured sump cover, the company said in a release. The F110 component is the latest milestone in the USAF and GE’s pathfinder Pacer Edge program. It is reported to be the first engine component designed for—and produced by—metal additive manufacturing to be qualified by any U.S. Department of Defense entity.

The airworthiness qualification of the sump cover brings Pacer Edge Phase 1a of the pathfinder to its conclusion. Part of the key to the accelerated qualification—in under a year—was GE’s decade of metal additive engineering and manufacturing expertise. The team’s in-depth knowledge of commercial aerospace engine airworthiness for flightworthy 3D printed metal parts is proving instrumental in helping USAF establish its own robust process validation and certification processes for military airworthiness, the company said.

“Much like the GE90 T25 sensor that was an FAA certification pathfinder for metal additive manufacturing for GE Aviation in commercial aerospace, the F110 sump cover sets a solid foundation for many more additively manufactured component qualifications with GE’s military customers,” said Matt Szolwinski, chief engineer and leader of GE’s Large Military Engineering team, in the release.

“USAF’s strong vision for additive as part of its wider sustainment and readiness strategy has allowed our combined team to progress at speed,” Szolwinski continued. “We continue to share our learnings and have developed an efficient, structured way of working—especially for developing qualification processes and expediting design iterations. This lean, operational efficiency is already driving results and now sets us up for the next phases of the program, including looking at complex and large format, load-carrying structures.”

Phase 1b is already underway and focuses on an out-of-production sump cover housing on the TF34 engine, which has been in service more than 40 years, according to the release. 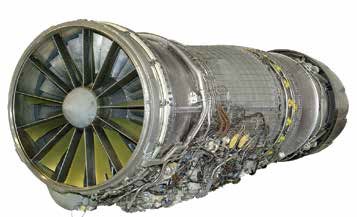 “We’re thrilled to be on this journey with USAF,” said Lisa Coroa-Bockley, general manager for GE’s Advanced Materials Solutions, in the release. “Additive journeys are great, but even better when you have a good map and experienced guides. We started with a relatively easy part, but the spiral development model is coming into its own. It provides focus for the team and our experts help navigate and problem solve along the way.”

A digital thread also runs through the pathfinder. GE experts who are focused on digital twinning, maintenance-based predictive analytics, and part lifecycle management expertise have been able to complement the USAF’s digital engineering strategy and in-house knowledge, according to the release.

“Human interaction and collaboration both add immense value to our work, but digital is the enabler,” added Coroa-Bockley. “Additive is a powerful digital technology that spans the entire process, from design and modelling, to in-situ monitoring, through to inspection and final level assurances. Adding digital twinning and predictive analytics on top brings new horizons into view, such as systems management, diagnostics, and repair of in-field systems.”

Nathan Parker, deputy program executive officer for the USAF RSO, called the Pacer Edge program “an important initiative for reducing risk and showcasing the application of additive manufacturing in aerospace.”

“The ability to additively manufacture an aircraft engine part and gain military airworthiness is a significant step forward in growing the adoption of additive manufacturing in the Air Force,” Parker said in the release.

“The Chief of Staff of the Air Force, General Charles Q. Brown, Jr., has challenged us to ‘accelerate change or lose,’” said John Sneden, director of the USAF’s Directorate of Propulsion, in the release. “The entire Pacer Edge process is built around the ‘accelerate change’ philosophy, and the speed of the F110 sump cover development and airworthiness approval is evidence of that. The capability that Pacer Edge is demonstrating and proving will be a game changer to engine production and sustainment, and will resolve many future Air Force readiness challenges.”

Lauren Tubesing, director of military accounts at GE Additive, said in the release that subsequent phases of the Pacer Edge program involve “the establishment of a metal additive manufacturing supply chain at Tinker Air Force Base in Oklahoma, capable of producing airworthy components in support of the DoD’s sustainment needs.”

Recently, the Air Force’s Propulsion Directorate and RSO invested $10 million to fund additional phases of the Pacer Edge program, leveraging the Defense Logistics Agency’s (DLA) Captains of Industry contract vehicle. The funding is expected to accelerate the development of the USAF’s organic additive manufacturing capability and capacity to design and print flightworthy hardware for military engines, aircraft, and support equipment. The Pacer Edge team is using this capability to alleviate hard-to-source and obsolete spare parts constraints for legacy systems, according to the release.

“The F110 sump cover was a terrific pathfinder, allowing us to exercise the USAF’s airworthiness process,” said Melanie Jonason, chief engineer for the USAF’s Propulsion Sustainment Division, in the release. “There are numerous parts in queue that are ideal candidates for metal 3D printing. Next, we are focused on refining the airworthiness process, so it is as responsive as the technology.”