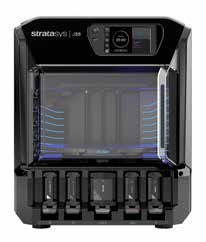 By bringing multi-material PolyJet printing to the desktop, the Stratasys J35 Pro is well-suited for engineering and design offices. (Photo: Business Wire)

EDEN PRAIRIE, Minn., and REHOVOT, Israel—As designers and engineers work to bring new and better products to market faster and more efficiently, Stratasys has worked to speed its pace of innovation using PolyJet technology. Stratasys is introducing two new PolyJet™ 3D printers for multi-material printing and in-office capabilities—along with new software for research and packaging prototyping—to help designers and engineers translate imagination into reality, the company said in a release.

The Stratasys J35™ Pro is the first multi-material 3D printer for the desktop from Stratasys.

The Stratasys J55™ Prime is said to extend the value of the J55 3D printer to include a new set of versatile materials that provide tactile, textual, and sensory capabilities, as well as full color.

“We’re in the business of helping designers and engineers translate whatever they can imagine into reality,” said Shamir Shoham, vice president of design for Stratasys, in the release. “Through the versatility of multi-material PolyJet 3D printing, our customers can create models and packaging prototypes not only quickly and efficiently, but with remarkable realism that stands out against other 3D printing technology.”

The J35 Pro 3D printer is reported to accommodate “everything from concept modeling to high-fidelity, realistic, fully functioning models.” It is an all-in-one, multi-material desktop 3D printer that is suitable for engineering and design office settings. Users have the option to combine a variety of materials, including Vero™ UltraClear, that can be printed simultaneously. This capability gives engineers and designers the versatility to produce parts that match their exact needs. The printer can incorporate up to three materials that can be printed as single material parts or combined on the same model part, on the same tray. Applications include over-molding, filling simulation, and printing in full gray scale, according to the release.

“We find that we spend a great deal of time creating and testing models,” said Yaniv Adir, project manager for Taga Innovations, Ltd, a manufacturing engineering company in Tel Aviv, Israel, in the release. “If a customer had changes or if it doesn’t work as expected, we would have to go through the process over again. By bringing the J35 Pro into our office, we can now create the models and prototypes in-house, in a day—giving us the ability to iterate, correct errors, and more efficiently verify designs with our customers. This printer has allowed us to revolutionize the way in which we do business.”

The multi-material capabilities of the printer are said to allow designers and engineers to incorporate the widest variety of grayscale colors and materials into a single print, while achieving complex shapes, intricate details, and delicate features. Engineers and designers can see what the product will look like, and can also test the functionality of it in the pre-production stage. The J35 Pro offers a simple design-to-print workflow powered by GrabCAD Print™, allowing users to import their designs using native CAD files or 3MF file formats, the company said in the release.

The J35 Pro is available for orders today and is expected to begin shipping in September.

“Ultra-realistic models make the idea real for our clients, enabling an accelerated decision-making process,” said Jeremy Garrard, director of market development, design, and R&D for Quadpack, a global packaging provider headquartered in Barcelona, Spain, in the release. “We are a long way from the bland all-white models we produced prior to 3D printing. Today, the possibilities are endless.” 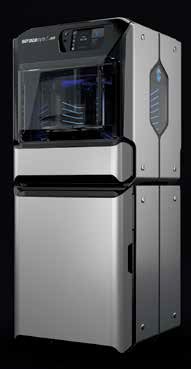 The J55 Prime builds on the technology of the Stratasys J55™ 3D printer introduced in 2020. It goes beyond full-color printing with new materials that enable tactile, textual, and sensory capabilities.

The printer uses multiple materials that cater to design, functional, and biocompatible prototyping. Such materials include Elastico™ Clear and Elastico™ Black for flexible, soft-touch printing that accurately simulates the look, feel, and function of rubber-like products. They also include Digital ABS™ Ivory for high impact designs, such as molds, jigs, fixtures, and functional prototypes; and Vero™ Contact Clear, a translucent material that is designed for prolonged skin or bodily contact and is applicable to medical devices, sport wear, or wearables.

Stratasys said the J55 Prime is office-friendly, with a compact design and odor-free and quiet operation.

The research package is said to provide users with increased flexibility over the print process, allowing them to explore and experiment with additive manufacturing and to accelerate innovation in the lab. Innovators can now use the materials to print with air voids and liquid, or embed an object into a print. Researchers can also use this extended set of materials and capabilities to experiment with 4D printing—the process by which a 3D printed object undergoes a transformation due to the influence of another material or outside element, the company said.

Combined with GrabCAD Voxel Print™, the software allows users to define the data volumetrically for each 3D voxel throughout the entire model. This is said to allow for an advanced level of control at a microscopic scale, enabling higher resolutions, fine-tuned color placement, and shore value transitions within one part.

New Valve Is Designed to Protect Against Abrasives, Erosion