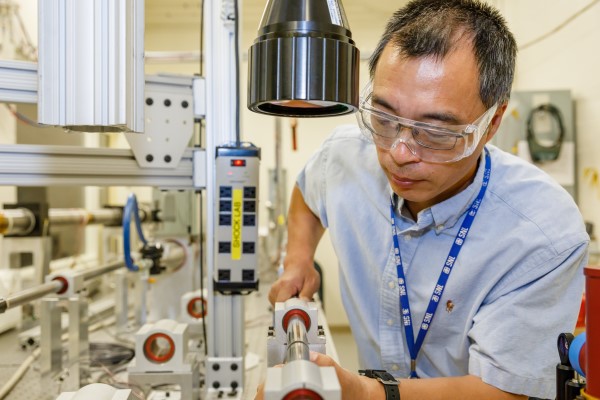 Bo Song, who developed the Experimental Impact Mechanics Lab at Sandia National Laboratories, places material for shock testing in the center of a Kolsky bar. When a gas gun is fired, the bar closes at the speed of a bullet train to assess how the material responds to stress and strain. (Photo by Bret Latter)

ALBUQUERQUE, N.M.—There’s a tiny hidden gem at Sandia National Laboratories that tests the strength and evaluates the impact properties of any solid natural or manmade material on the planet.

From its humble beginnings as a small storage room, mechanical engineer Bo Song has built a singular Experimental Impact Mechanics Lab that packs a world-class punch in 200-plus square feet of weights, rods, cables, bars, heaters, compressors, and high-speed cameras.

Over the past eight years, Song has grown the lab’s instrumentation, capabilities, staff, and clientele at Sandia based on his work and ideas at other labs.

“We didn’t start from the ground up, but close to it,” Song said. “I began with a small budget and limited tech support, but thankfully the lab was already conducting systems evaluation and technology development projects for Sandia and the National Nuclear Security Administration. With the assistance of a couple high-level technologists, we have built up the testing apparatus in that storage room.”

Song said his groundbreaking work in experimental impact mechanics and evaluating the dynamic response of materials to temperature and pressure is quickly positioning the lab as a premiere facility in materials assessment for national security programs, defense contractors, and private industry.

The lab also serves as a primary test facility for small-scale components and subassemblies, conducting feasibility studies that enable its customers to confidently proceed with full-scale projects. Nearly a third of the lab’s customers come from outside Sandia, ranging from the Department of Defense and NASA to outside organizations and industry.

The lab also serves as a primary test facility for small-scale components and subassemblies, conducting feasibility studies that enable its customers to confidently proceed with full-scale projects. Nearly 70 percent of the lab’s work is for programs in nuclear deterrence, advanced science and technology, and global security. 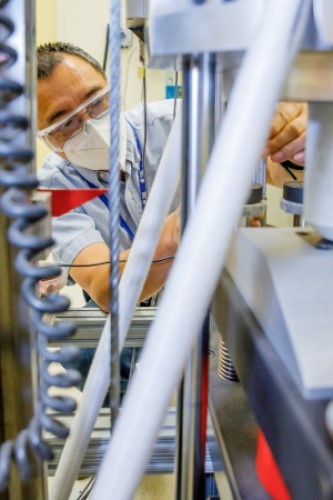 Sandia National Laboratories mechanical engineer Bo Song makes adjustments to the Drop-Hopkinson Bar — the only one of its kind in the world. (Photo by Bret Latter)

Song takes pride in welcoming all comers. Nearly a third of the lab’s customers come from outside Sandia, ranging from the Department of Defense and NASA to outside organizations and industry.

“There’s no material we cannot test,” Song said. Materials range from rock and concrete to metal alloys to ceramics, plastics, rubbers, and foams. “In the end, our customers receive a breakdown of material properties, and our materials experts provide counsel on how to improve the customer’s material design and selection.”

“There’s no material we cannot test,” he said. “We evaluate the nature, properties, and strength of materials and how they change in different testing configurations or conditions. In the end, our customers receive a breakdown of material properties, and our materials experts provide counsel on how to improve the customer’s material design and selection.”

Anatomy of the Lab

Under the myriad combinations of controlled temperatures, pressures, and velocities, the lab conducts pure research and development on the mechanics of materials under extreme conditions with remarkable precision.

In meticulous concert, the lab’s instrumentation crushes, compacts, twists, pulls, and stretches materials under various controlled states of hot and cold to assess their pliability, durability, and reliability. Materials range from rock and concrete to metal alloys to ceramics, plastics, rubbers, and foams.

The lab’s crown jewel is its 1-inch-diameter Drop-Hopkinson Bar, with a carriage of up to 300 pounds—the only one of its kind in the world—used to measure the tensile properties of materials under low to intermediate impact velocities.

The lab’s crown jewel is its 1-inch-diameter Drop-Hopkinson Bar, with a carriage of up to 300 pounds—the only one of its kind in the world—used to measure the tensile properties of materials under low to intermediate impact velocities. This unique apparatus can simulate accidental drop or low-speed crash environments for evaluating various materials used in national security programs and private industry alike. 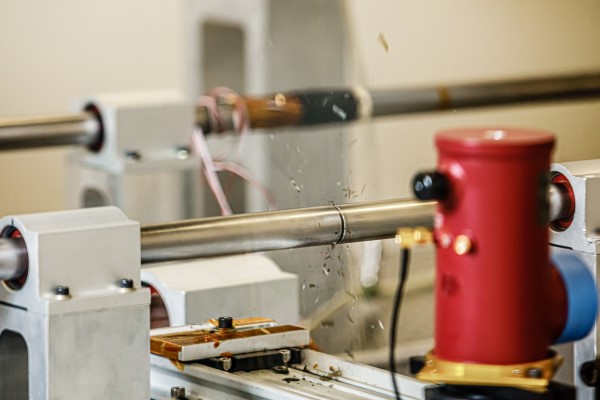 Upon impact, custom-made sensors measure the force being applied and displacement of the material being tested at Sandia National Laboratories’ Experimental Impact Mechanics Lab. (Photo by Bret Latter)

Central to the lab’s testing capabilities are two one-inch diameter, 30-foot long steel or aluminum Kolsky bars driven pneumatically to speeds of a bullet train in either compression or tension mode. The bars are named after Herbert Kolsky, who in 1949 refined a technique by Bertram Hopkinson for testing the dynamic stress-strain response of materials. Another 3-inch diameter steel bar is used for mechanical shock tests on large-size material samples or components.

In all these bars, samples of materials are placed in the center of the apparatus and stress waves are activated through a gas gun. Custom-made sensors were developed in the lab to measure the force being applied and displacement of the material being tested.

“We designed and built a computer-controlled Kolsky Bar that uses a furnace and robotic arm to precisely heat and place the material for testing,” Song said.

The lab also is fitted with an environmental chamber and induction heater that can take temperatures up to 2,192 degrees Fahrenheit (1,200 degrees Celsius, or roughly the temperature of lava in a volcano) or down to minus 238 Fahrenheit (minus 150° C, or about four times colder than the average temperature at the South Pole) to test materials under extreme conditions. “We designed and built a computer-controlled Kolsky Bar that uses a furnace and robotic arm to precisely heat and place the material for testing,” Song said.

When the specimen has reached the proper temperature, the robotic arm retracts and positions the sample, a mechanical slider moves the transmission bar so that the sample is in contact with both bars, and then the striker bar is fired to compress the sample. All this takes fewer than 10 milliseconds, or about one-tenth the time of an eye blink.

To measure the displacement, strain, and temperature of material during impact, an optical table is rigged with a high-speed camera that collects optical images at up to 5 million frames per second. An infrared camera measures heat at up to 100,000 frames per second. “This is a dynamic lab that we’re continually designing to meet our customers’ needs,” Song said. “We love the challenges they bring to us.”

Picking up Ideas Along the Way

The lab’s successes haven’t come easy. Song has used all his 30-plus years of higher education and experience in experimental impact materials testing to build and customize the Sandia lab.

His introduction to the Hopkinson Bar, the predecessor to the Kolsky Bar, came by happenstance as a student at the University of Science and Technology of China, a national research university and China’s equivalent to the Ivy League. A professor who was starting a new impact mechanics lab asked Song to be his first full-time student. “I didn’t even know what a Hopkinson Bar was at the time,” he said.

But he accepted the offer, grateful for the opportunity. He was equally grateful for his education, which was not guaranteed in China. “My parents didn’t have the benefit of attending a university,” Song said. “But they knew the value and importance of education in how I could explore ideas and people. My parents understood that the key to my future was to be well-educated, so they sent me to good schools and supported me getting a doctorate.”

While some doors opened for Song, he actively sought others. After earning his doctorate, he began to survey his career options outside China. He searched in the U.S., Australia, and Europe and ultimately landed at the University of Arizona in Tucson as a postdoctoral researcher in a material dynamic testing lab. Song spent four years there, and when the entire lab moved to Purdue University in Indiana, he moved with it.

At the University of Arizona and at Purdue, Song was working on several Department of Defense materials testing projects that included Sandia Labs. The more he worked with colleagues from the labs, the more he became interested in Sandia. He applied for and accepted a position with Sandia Labs in California in 2008. Five years, a wife and two kids later, he found his way to Sandia in New Mexico.

Song credits his University of China mentor for teaching him more than technical know-how. “He also was instrumental in showing me how a lab functions as a business and how to cultivate connections,” Song said. “In my first three months in New Mexico, I never sat in my office. I was either in the lab conducting tests and building our capabilities, or I was knocking on Sandia doors looking for collaborators and connections.”

“There are not many labs around the world that can do what we do,” Song said. “We’re becoming known as one of the leading facilities globally in experimental impact mechanics.”

What Does ‘American Made’ Mean to You?