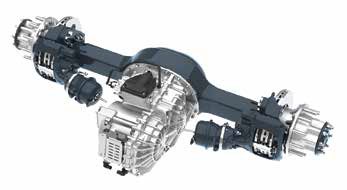 Allison first launched its eGen Power 100D in 2020 and has since worked to stringently validate and, where necessary, refine the e-Axle with most of the major OEMs in North America. This e-Axle features two electric motors, each capable of generating greater than 200 kilowatts of continuous power, with peak combined power of 648 kilowatts, according to the release.

“We believe there is no one-size-fits-all when it comes to electrification, and a variety of products are needed to address the wide range of applications and market segments Allison serves,” said John Coll, senior vice president marketing, sales, and service for Allison Transmission, in the release. “Thus we are currently and will continue to expand our family of electric axles.”

The eGen Power 100D also integrates a two-speed gearbox within the central housing. This enables the high torque required to get heavy loads moving, while also offering the benefit of superior efficiency at cruise speed. The eGen Power 100D is capable of supporting up to a 10.4-tonne or 23,000-pound gross axle weight rating, and it includes differential lock functionality, the company said in the release.

Allison has also expanded its dual motor offerings to include the eGen Power 130D, a variant of the 100D, specifically designed for the European and Asia Pacific markets, where many commercial vehicles require a heavier, 13-tonne gross axle weight rating. The eGen Power 130D is said to maintain the same core components, performance, and differentiated value as the eGen Power 100D, including the power ratings previously mentioned for the 100D, but with increased axle weight rating capability.

Leveraging core components from the eGen Power 100D, such as the motor, inverter, and shifting mechanism, the 100S is said to offer exceptional performance characteristics in 4×2 and 6×4 configurations. The 100S uses a single motor to generate 212 kilowatts of continuous power, with a peak power of 324 kilowatts, and 23,500 newton meters of torque at the wheels.

Like the 100D and 130D dual motor e-Axles, the 100S is a platform architecture upon which further variants will be developed. It is simple to install and easily integrates into existing truck chassis. The eGen Power e-Axle family are designed to be 100 percent maintenance-free for the life of the vehicle, significantly reducing downtime and enhancing eGen Power’s total cost of ownership advantage, the company said.

One Giant Leap for the Mini Cheetah