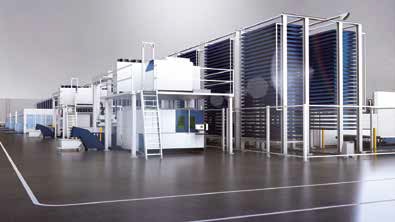 PONTIAC, Mich.—General Motors’ plans to support future electric vehicle production at its Pontiac Stamping Plant will rely heavily on new, highly flexible fabrication machinery and presses. The technology is key to the automaker’s planned $40 million investment at the plant, which is currently undergoing renovations and is expected to create 20 new positions, GM said in a release.

The “Flex Fab” sheet metal fabricating technology will enable repeatable, custom, and precise stamping, reducing costs for low-volume applications. Flex Fab will require little or no additional tooling investments to fabricate new stampings for future products, according to the release.

“This investment will bring the latest in flexible, sheet metal fabrication technology to the Pontiac team,” said GM Vice President of North America Manufacturing and Labor Relations Phil Kienle, in the release. “Our manufacturing capabilities create a competitive advantage for GM, and I am confident the team at Pontiac Stamping will continue delivering excellence in all areas of the business as they deploy this new equipment.”

Pontiac Stamping currently employs a workforce of 191 hourly employees, represented by UAW Local 653, and 31 salaried employees. The plant began production in 1926 as part of the Oakland Motor Car Company and became part of the Pontiac Motor Division in 1932, GM said in the release.