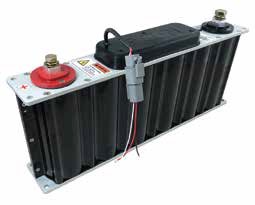 GALESBURG, Mich.—Eaton reported that its Vehicle Group has developed a series of 48-volt technologies to assist its global on- and off-highway commercial vehicle customers that are transitioning from traditional 12- and 24-volt vehicle systems to systems that include 48-volt architecture.

The power management company said in a release that its 48-volt systems can power new, advanced energy-consuming components. They can also help reduce emissions and improve fuel economy and performance.

“This development comes as global vehicle manufacturers are making decisions to adopt new technologies to meet emissions regulations,” said Ben Karrer, manager, technology development, Eaton’s Vehicle Group, in the release. “Of the options available, 48-volt architectures are becoming more popular because they can decrease both CO2 and NOx simultaneously, which helps both our customers and the environment.”

Most vehicles have traditionally operated with a 12-volt system, but with tightening fuel economy regulations and new, advanced power-consuming components being added, increasing power needs are driving the move toward 48-volt systems.

By powering systems with 48-volt architecture, vehicle manufacturers can reduce mechanical loads and CO2 emissions. Many vehicle systems today are powered directly from mechanical power generated by the engine, which runs 12-volt systems, such as air conditioning and pumps. Eaton is developing 48-volt systems that include motor generators and inverters, which  generate 48-volt DC power for the vehicle. Eaton also produces 48-volt DC/DC converters that step power down from 48-volt vehicle architectures to power 12- and 24-volt systems, the company said in the release.

Eaton’s Vehicle Group is also developing power electronics for 48-volt electric catalyst heating, which provides heat directly to the vehicle’s aftertreatment system. This active heating is said to help catalyst components reach efficient operating temperatures faster upon engine start and maintain those temperatures during low load operation. This will be an essential strategy for reducing emissions to the levels required by future regulations, according to Eaton.

“Forty-eight-volt power will also be used to power systems such as HVAC and the engine cooling fan, which are traditionally run by the engine,” said Karrer in the release. “Today’s systems are not intelligent—you can’t control when they’re on or off or adjust the levels. Converting those components to electric alternatives allows you to intelligently control them and eliminate mechanical loads.”

An electrical engine cooling fan and electric air conditioning compressor are also under development. Electrifying the cooling fan provides additional benefits. It could be reduced in size and strategically placed within the engine bay, allowing for aerodynamic design flexibility to increase fuel economy and reduce emissions, Eaton said in the release.

A wide range of 48-volt energy storage technologies,  including lead-acid batteries and supercapacitors, are also in development at Eaton’s Vehicle Group.

“We’re integrating various energy storage technologies into a larger storage pack including controls, fusing, and contactors,” said Karrer in the release. “Eaton’s Electrical Components Group is our partner for supercapacitors, and we will be working with most commercial vehicle battery manufacturers for lead-acid batteries.”

Lead-acid batteries are inexpensive compared to lithium-ion packs. They are also safe and more efficient, with a longer life span versus existing lead-acid battery applications, the company said in the release.

Supercapacitors can quickly charge and discharge at higher rates than lithium-ion batteries. Although their size and weight are comparable to lithium-ion packs, supercapacitors don’t retain high levels of energy in comparison or require a liquid cooling system. They also have a longer cycle life, the company said.