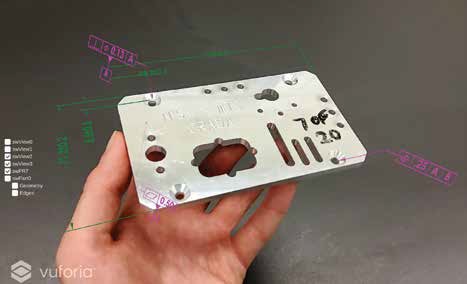 GAITHERSBURG, Md.—Imagine a manufacturer picking up a machined part and being able to see data on that part’s geometry, how it’s assembled, and its product manufacturing information (PMI). This is what Teodor Vernica, a National Institute of Standards and Technology (NIST) research associate in the Systems Integration Division (SID), is working on. The work revolves around a technology called augmented reality, in which digital information or representations are superimposed onto objects in the real world. Unlike virtual reality, in which users interact entirely with a virtual world, augmented reality superimposes information onto real-world objects to help guide users on how to interact with those objects.

As augmented reality technologies become more advanced and cheaper, manufacturers have begun using them to make their production systems more precise and efficient. Large industries are using the technology to train workers, tour and inspect factories, safely limit human exposure to machinery, and see the data associated with physical products in front of them.

Manufacturers currently view this product data on a computer screen, typically as a digital computer-aided design (CAD) file. Visualizing files in augmented reality can be especially helpful for complex parts because users don’t have to open software to view the product and its information, but instead can simply point their augmented reality tablet or headset at the actual part and see the product data.

The problem that Vernica and Bill Bernstein, a mechanical engineer in SID, are working to solve is that there is currently a lack of interoperability between engineering data, like what’s contained in CAD files, and the software typically used to develop augmented reality applications, or software. In other words, there’s no standard way to convert product data from a computer screen to augmented reality.

Vernica and Bernstein are bridging this gap by developing a pipeline to import STEP and QIF files, which contain data from CAx files, into augmented reality engines.

The NIST has been indispensable in the creation and upkeep of the STEP and QIF standards, and Vernica is trying to apply these standards and associated tools to an augmented reality framework. He and Bernstein have successfully created a pipeline for implementing STEP data into augmented reality by leveraging the NIST Step File Analyzer and Viewer and STEP to X3D Translator, and they are now working to do the same for QIF files, which contain inspection data.

Their main challenge is automatically matching QIF data to STEP data to contextually visualize inspection results on the part geometry defined in STEP. Ideally, you would be able to match these standards with identifications that make them interoperable, but this is still challenging.

The Extended Digital Thread project in SID is addressing a key measurement science challenge of manufacturing in the digital age: STEP and QIF files contain part data and measurements, respectively, and the process of translating these files into augmented reality is a process of visualizing measurement data. Inspection data in the QIF format are typically viewed in a spreadsheet, but contextually visualizing data on a physical manufactured part would be immensely helpful to metrologists because it would allow them to position parts more accurately and quickly for inspection, and to visualize inspection results in real time.

Teodor Vernica and Bill Bernstein are part of the Extended Reality Community of Interest, which brings together researchers across NIST who are working on augmented, virtual, and extended reality.

AI for Smarter Factories: The World of Industrial Artificial Intelligence