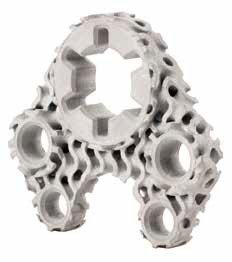 This machine bracket has been designed using a gyroid lattice infill and titanium in place of 17-4PH stainless steel to reduce weight and material while maintaining the required functional strength and stiffness. The resulting geometry would be impossible to produce using conventional manufacturing processes due to its complexity. 3D printing this new design on the Studio System 2 in Ti64 reduces the part weight by 59 percent. (Photo: Business Wire)

Desktop Metal reports it is the first to commercialize titanium for extrusion-based bound metal additive manufacturing.

BOSTON—Desktop Metal has qualified the use of titanium alloy Ti-6Al-4V (Ti64) for its  metal 3D printing platform, the Studio System 2™, the company said in a press release.

The Studio System 2 is described as an accessible metal 3D printing platform that offers customers an easy way to print high-performance metal parts in low volumes for pre-production and end-use applications. Desktop Metal said in the release that it will be “the first and only company to make the material commercially available for extrusion-based bound metal additive manufacturing technologies.”

According to Desktop Metal, Ti64 is the most widely used titanium alloy and is characterized by its high tensile strength, corrosion resistance, and biocompatibility. Its high strength-to-weight ratio makes Ti64 well-suited for high-performance production applications in industries such as aerospace and defense, automotive, and oil and gas. Its biocompatibility makes it particularly desirable in medical applications, such as with surgical devices and implants, the company said in the release.

“Titanium has been a challenging material for bound metal 3D printing because it is both extremely reactive in powder form and difficult to sinter,” said Jonah Myerberg, co-founder and CTO of Desktop Metal, in the release. “We are excited to be the first to commercialize the most common titanium alloy, Ti64, for 3D printing through our Studio System 2 solution, opening the door to more accessible production of high-performance titanium parts.”

Steve Wozniak, co-founder of Privateer Space, said in the release that the ability to 3D print with titanium is “incredibly valuable in industries like aerospace because of the material’s ability to support complex and lightweight designs.” Privateer Space is a new satellite company focused on monitoring and cleaning up objects in space.

“With the Studio System 2, the team at Privateer Space will be able to achieve the affordability and light-weighting capabilities needed to pave the way for our satellite design and launch. This technology is truly a differentiator in helping companies to accelerate innovations in space and, through the material advancements that Desktop Metal is making, we have an amazing opportunity to collaborate and keep space accessible for future generations,” Wozniak said in the release.

When printed with the Studio System 2, Ti64 parts are reported to demonstrate excellent mechanical properties and corrosion resistance on what Desktop Metal called “a more accessible platform than legacy powder bed fusion 3D printing alternatives.” Examples of use cases include a machine bracket, a telescope focus ring, a drone coupling, and a fuel injector nozzle.